Bean is one of three mares seized by animal control in Snohomish County after they were discovered hidden in a barn, locked in filthy stalls, and starving. Bean’s filly Jessel was one of the three. Bean was considerably underweight when she was seized. The horses were signed over to SAFE in late December, four months after their seizure. 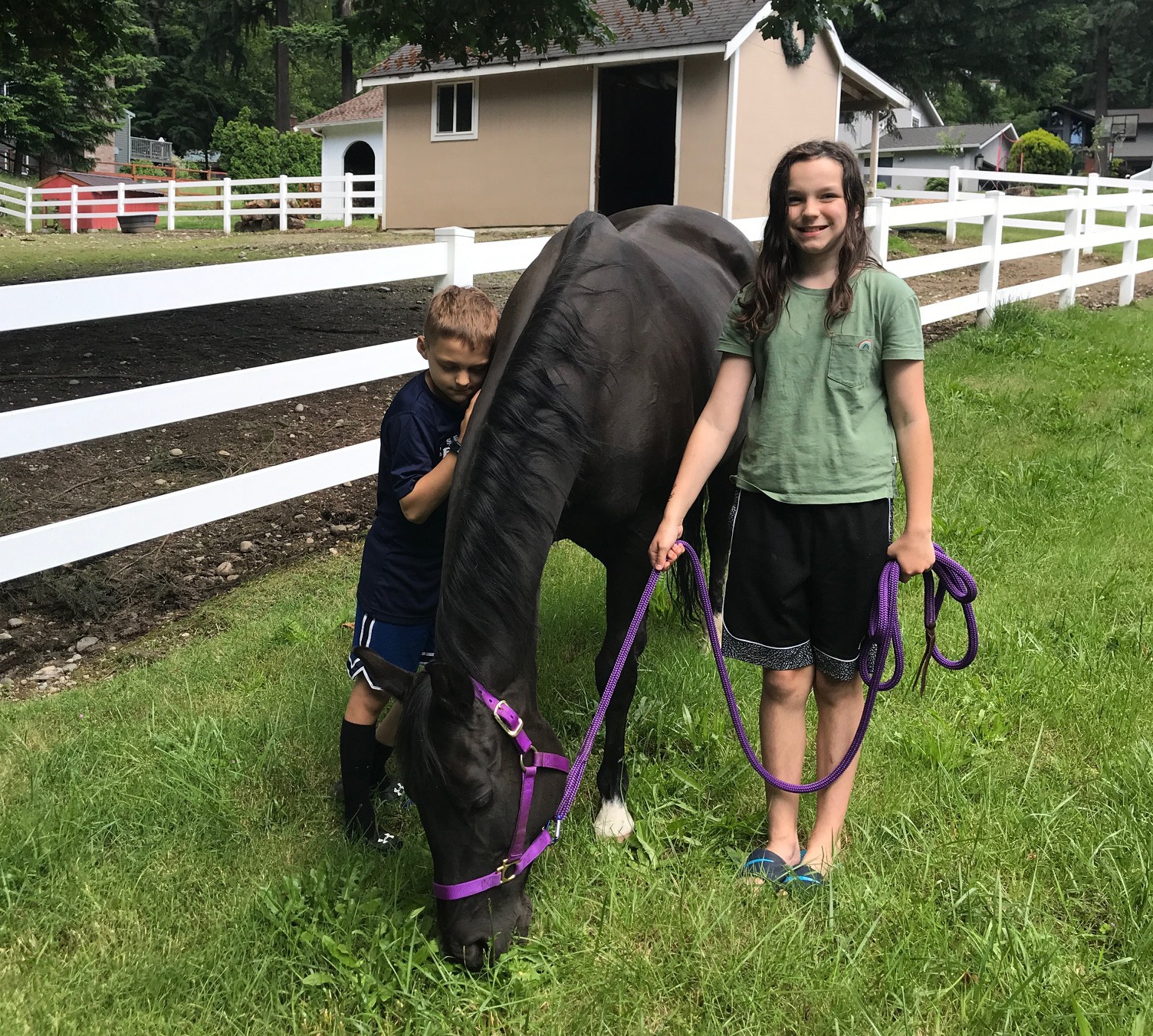 In lieu of in-person site visits, we’ve been conducting virtual follow ups with adopted SAFE horses. A SAFE volunteer spoke by phone with Michelle, who adopted Bean. Michelle reports that all is well with Bean, who is well loved by the kids. She’s been ridden by both Michelle and her daughter, who report that even with time off from riding, Bean is great under saddle. They are hoping to get an alpaca soon so Bean has company. 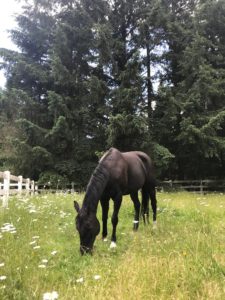 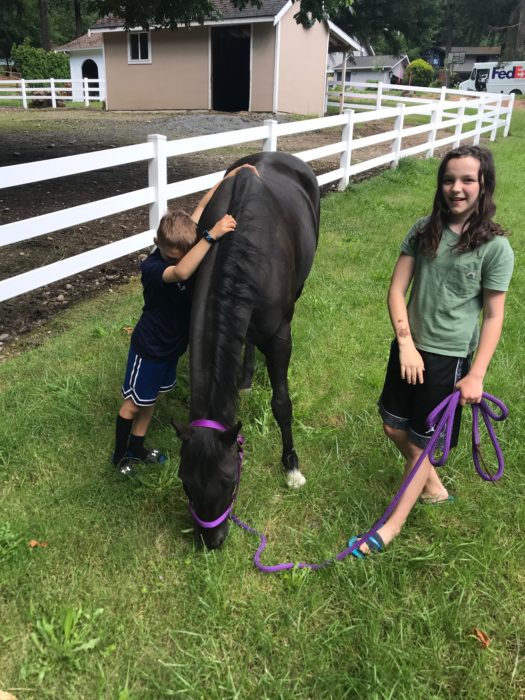 A New Beginning for Bean 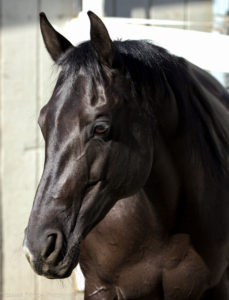 From time to time, a family comes into SAFE looking for a horse and we don’t have a match. It is hard thing to say no to a great family but finding the right horse is very important. When Michelle first came in looking for a horse for her family, unfortunately this was the case. Michelle grew up with horses but it had been a few years since she had been around them so I suggested the family start taking riding lessons and volunteer at SAFE to learn more about horses and horse care.

A few months went by as the family prepared for bringing a horse into their lives. When Bean became available for adoption, I knew she could be that perfect horse. They had originally thought of getting a younger horse that the kids could grow with but I explained “green plus green equals black and blue.” They came out to ride Bean and were instantly in love. Here was a horse that both Michelle and her kids could enjoy. Safe to have the kids groom and do lead line riding and fun for mom to take lessons and go on trail rides.

Bean has been with her new family for a few months and she is relaxed and comfortable in her new home. There are a few horses living next door and her own baby goats to watch over. There is a nice big field that she has access to 24/7 and she will NEVER be locked up in a stall again! This is truly a dream come true for Bean and this all-star adoption family. Anything she needs they are able to provide. They have already shown good ownership skills by asking questions and getting the help when needed. We never know exactly the future each of our horse will have but the some of the most important parts are SAFTEY, LOVE and HAPPINESS. Bean has all of these and more. We are so grateful she has found a forever home.

Michelle had a few things to share about adopting Bean:

I know we have only had Bean for a short time but already my family cannot imagine life without her. She has the sweetest personality and loves company. She follows the kids down to pick blackberries, greets us when we get home, and runs to the fence when she sees us. Her favorite thing to do is go for a ride out on the trails, especially when there is another horse along. 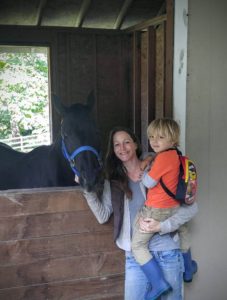 This has been an amazing experience. SAFE was beyond amazing. I knew everything possible about Bean before going into this, which is way more than I would have gotten from Craigslist. I grew up with horses but this is my first horse on my own. The buying and owning were a little intimidating to me and I also faced issues I never expected, however SAFE was helpful and there for me with anything I needed. I was able to work with Bean and a trainer from SAFE a few times before deciding to adopt. Terry from SAFE came out to my place beforehand and helped me with ideas on how to keep the pasture and stall safe. She also came out when Bean arrived and helped transition her and work through some issues we had. Bean had not been adjusted to as much grass as we had so Terry sat on the phone with the vet as we came up with a plan. At a later point I had issues with saddle fit and Terry came out and brought some saddles to try on her.

I honestly can’t imagine buying a horse anywhere else. They were so helpful with everything and it made it such an easy transition for Bean and a lot less stressful for my family and myself. Wonderful experience, thank you SAFE.

Getting to know Bean 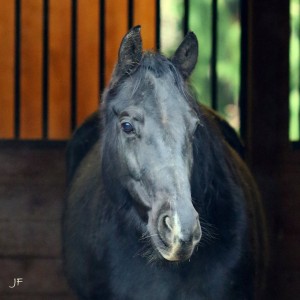 New horses always take time settling into their new lives as SAFE horses. In the first few weeks they’re here, we get to know their personalities, what they like, what they don’t like. We start to dream of what kind of home will be the perfect match. Bean had been a pleasure to work around, right from the start. She is kind, gentle, and very sweet. She has large thoughtful eyes and has quickly become a favorite.

Dr. McCracken came out to give Bean a health evaluation. She had her teeth floated and was vaccinated. Overall, Dr. McCracken says she’s pretty healthy. She does have two swollen areas on her hind legs. The swelling on the outside left hind is close to her fetlock, which being so close to a joint, could be an issue. Dr. McCracken detected some fluid and scar tissue but doesn’t feel it’s too serious. There is also a hard bump on her right hind but this is in a superficial area and not a concern at this point. We’ll be keeping a close eyes on her, but for now we have the okay to start working her.

We will boost Bean’s vaccines in three weeks, which is our standard protocol when we have no vet history on a horse. Bean was great for the work up and with the injections. I can’t say enough good things about this girl!

Note: We’ve been contacted by a few people who knew Bean in her previous life, several of whom have told us her original name. When Bean, Jessel, and Tess were signed over to us by Animal Control, we did not have any information as to what they were called in their old life, and even if we had known their old names, it’s a tradition at SAFE, especially with horses who have suffered neglect or abuse, to christen them with a new name for a new life. The privilege of choosing that new name is given to people who are special to SAFE as a way of saying thank you. Bean was given her new name by Heather Evans-Keliher, a four year veteran of the SAFE volunteer ranks, who is to this day one of the people who keep this rescue on its feet, day in and day out. Heather named Bean in memory of a beloved dog that is no longer in her life but who lives on in her heart. Similarly, Tess was named by the unbeatable Jackie Liles, in memory of her dog Tess, and Jessel was named by our Volunteer of the Year Jeanne Stine, in memory of, you guessed it, her dearly departed dog Jessel. See, SAFE is more than just unforgettable horses…it’s about our unforgettable volunteers and the ones they hold dear. 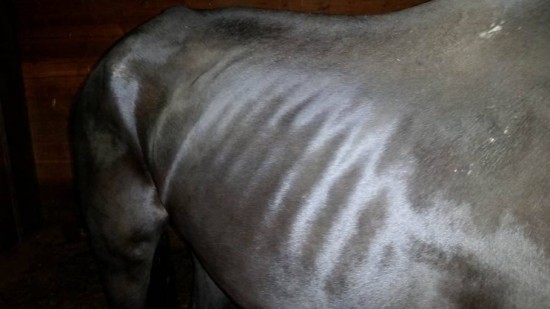 Bean, prior to seizure

Bean is one of three mares seized by animal control in Snohomish County after they were discovered hidden in a barn, locked in filthy stalls, and starving. Bean’s filly Jessel was one of the three. Bean was considerably underweight when she was seized. The horses were signed over to SAFE in late December, four months after their seizure. 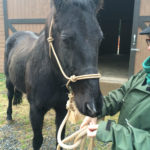 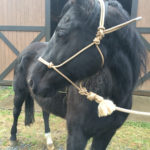 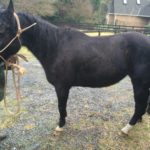 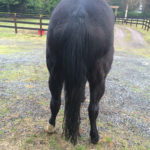 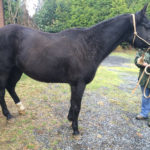 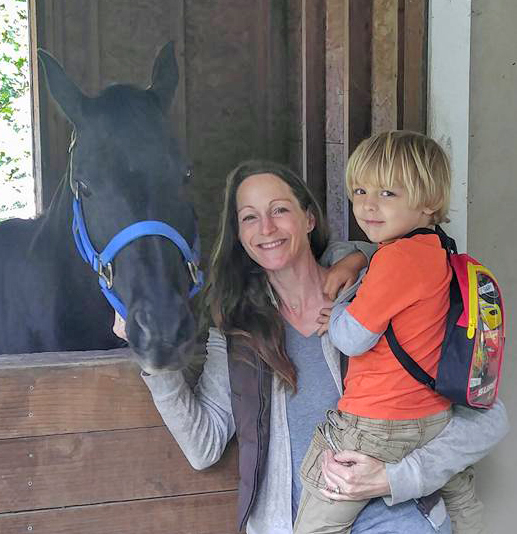 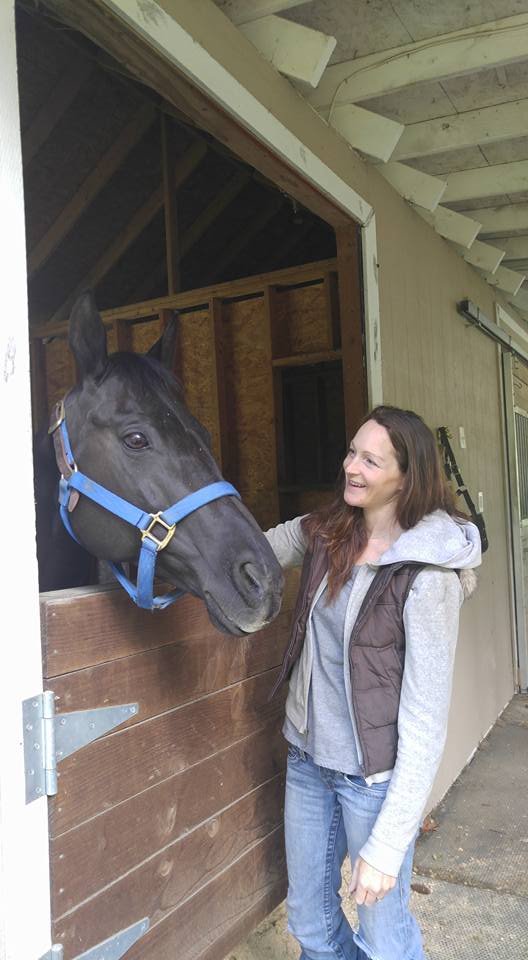 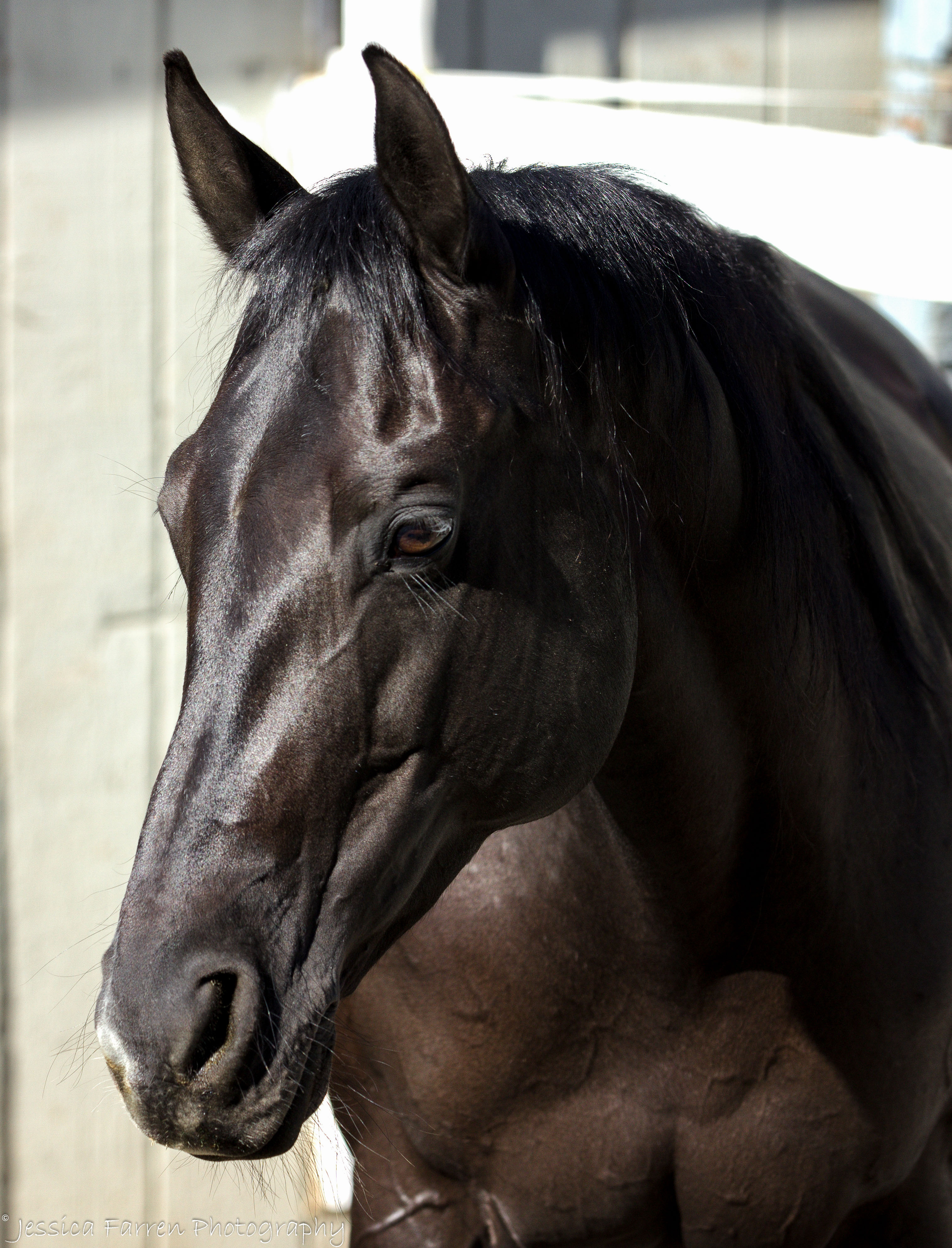 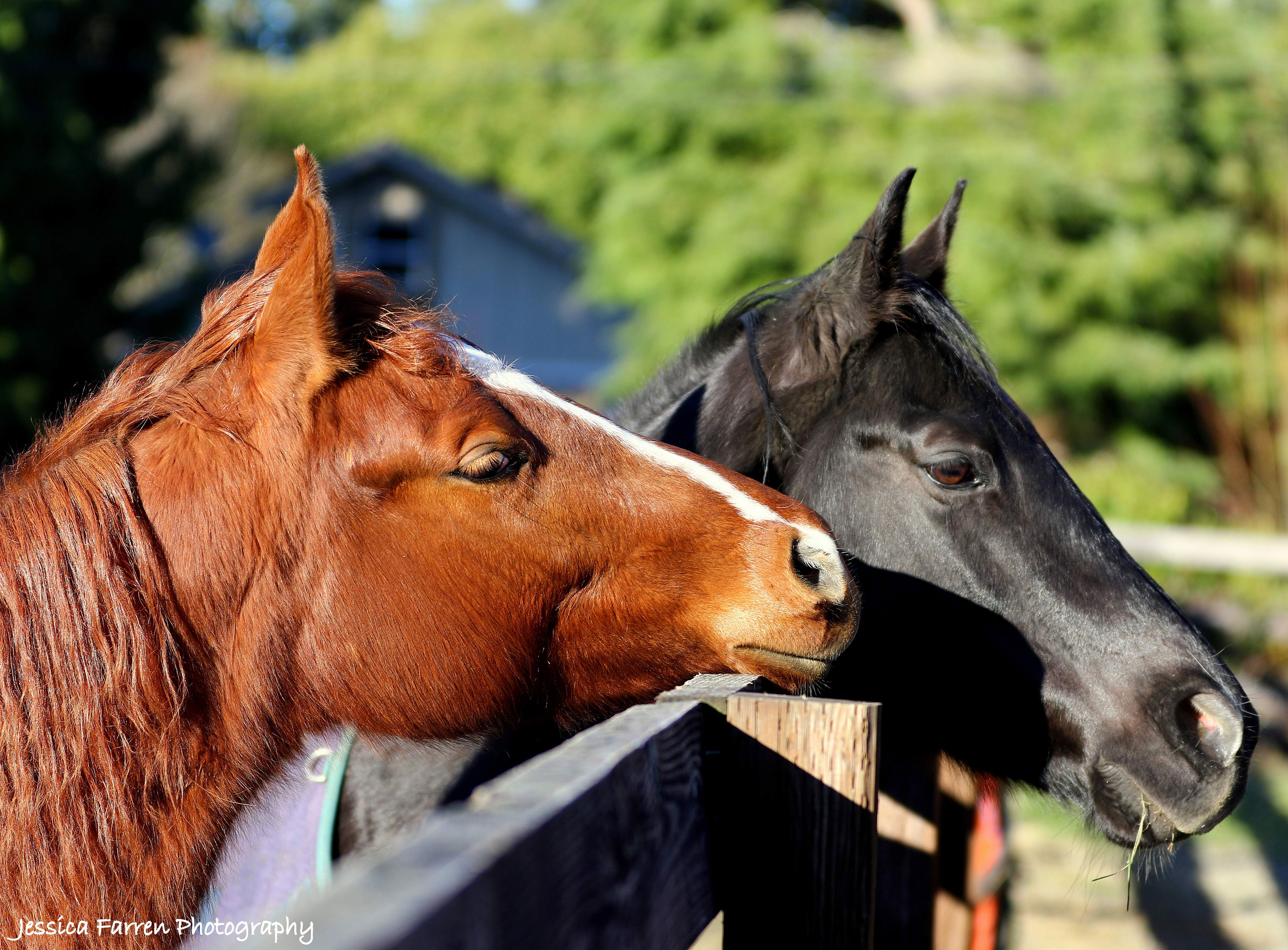