breed:2001 chestnut Arab mare
registered name: O Bahira Magidaa
type of rescue: SCAC seizure
intake date: 3/3/2008
adoption date: 5/21/2010
length of time with SAFE: 2 years, 2 months
Amber’s story: Amber is one of a large group of horses that were seized from their breeder in February 2008 due to serious neglect. Amber was one of the broodmares, an Arab mare with valuable Egyptian bloodlines. She was timid and extremely flighty but thankfully she was wearing a halter, so we were able to catch her and begin to treat her lice and rainrot. She had huge bald areas on her back, knots in her mane and tail and if at first she did not appear as thin as the other seized horses, it was because she was heavily pregnant. Ten days after her rescue, she gave birth to a chestnut filly. Remarkably the foal, who we named Ariel, was born healthy and strong.

Amber made a slow and steady physical recovery, but it took a lot longer to gain her trust and help her get accustomed to regular handling. Everything was new to her: brushing, getting her feet trimmed, wearing a blanket. She was very head shy, and wary of being touched, and it took some time to convince her that we did not intend to hurt her. Her natural curiosity helped a lot, and if you didn’t try to pet her or catch her, she’d approach on her own and cautiously check you out. About a year after her rescue, she was started into training with Andrea Lucianna at Half Trak Farms. Training helped Amber gain confidence, and she did quite well. She was adopted in May 2010 and has a fairy tale life with SAFE Board Member Lara Lutz and fellow SAFE Alumni Louie. 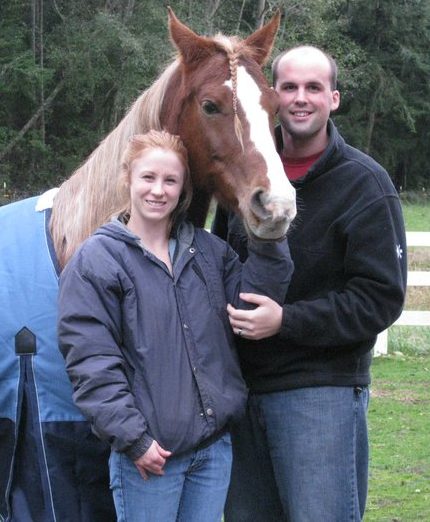