Redmond was purchased from an Eastern Washington back in 2005. The story of his rescue is long, but to really understand how this horse saved his own life, it’s worth reading (click here to view it.). Redmond was adopted by a long time SAFE volunteer and supporter, and he was loved and cared for from the day he arrived home to the day in 2021 when he passed away. To say that Redmond was adored would be a complete understatement. He lived a glorious life, in beautiful surrounds, with good friends. And no one who ever met him could say he deserved any less. Redmond passed away at the age of 32, which is a very advanced age for a Thoroughbred. His adopter and her vet monitored him closely in his last years as his health began to fail, and when the time came to let him go, he was humanely euthanized and passed with dignity and grace. As one of the earliest SAFE horses, he will always be remembered, not only for him history, but because of the remarkable individual he was. Rest in peace, Redmond. You are loved. 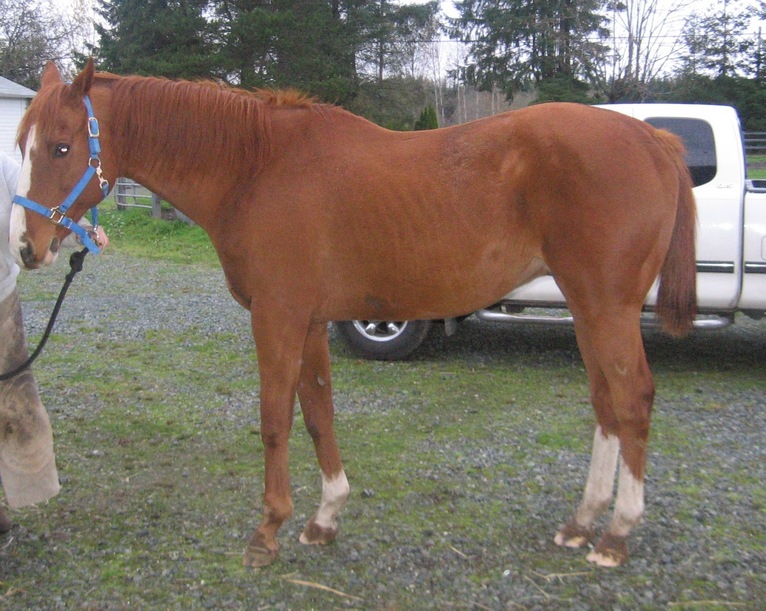 Ask and Ye Shall Receive: the Story of Redmond 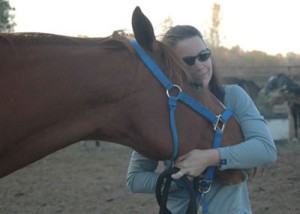 Jaime & I went to the Yakima feedlot in Oct 2005 to help CBER evaluate a large group of new horses. Because there were so many horses at the lot, CBER had to focus on the sound, rideable horses that would be the easiest to find home for. There was a chestnut gelding at the lot that day with a hugely enlarged ankle — clearly unsound — who was not going to be listed. I will never forget the way this horse politely but persistently followed Jaime and I around the lot while we worked with the other horses. Each time we went into the arena to ride and photograph another horse, “Red” would stand outside the gate and wait for us to come back out. It was totally amazing, like he knew exactly what was happening to him and figured out his best chance to be saved was to appeal to us to help him.

When it came time to leave, we petted him and loved on him and took some photos of him and sadly said goodbye. But once we got back home, neither of us could stop thinking about him. A day or two later, we pooled our money along with a generous donation from Jaime’s friend Stephanie, and I headed back to Yakima to buy him. We didn’t even have a place to keep him yet, but since he wasn’t going to be listed, we knew he didn’t have a chance…and there was something about him that made that completely unbearable. Even if his lameness meant that he would have to be put down, we felt it was far better to spend the money to do that, rather than letting him die a cruel and terrifying death in a slaughterhouse.

So as I was trailering him back over the mountains, Jaime was frantically trying to arrange a foster home for him and set up an appointment to have his lameness evaluated by a vet. Within days of arriving at his foster home, he began to move more comfortably. X‑rays showed that Redmond’s fetlock was completely fused, and therefore mostly pain-free. His “lameness” was the result of walking on an ankle that could not flex. Euthanasia was not going to be necessary for Redmond, much to our huge relief.

Redmond found his forever home a few months later with Valerie in Monroe WA. He shares his barn and pasture with his partner-in-crime: another chestnut Thoroughbred gelding named Chewy. He is loved and pampered and adored. Like many people who own rescued horses, Valerie has strong feelings about the ordeal that her horse went through. “If I were to describe the feeling I get when I look at Redmond…I would say it is bittersweet. From the moment I saw him, I knew I wanted him in my life, and words cannot begin to describe the love I have for this horse. Bittersweet comes into play because were it not for this fused fetlock…I doubt very much that Redmond would have ended up going to slaughter.

“This horse knows his way around a barn — he can open barn doors (the big ones — not just the stall doors) and clearly has been stalled a good bit of his life. He is absolutely bar none the smartest horse I have ever met. He closes barn doors when he doesn’t want to be bothered by my other horse, exaggerates his limp when he doesn’t want to play (will walk sound when not being bothered to play) and many other actions that are absolutely intended to communicate with human and horse alike. He is nothing short of amazing. To watch him move — even on a fused fetlock — a high level dressage horse exists in that body. He is a gorgeous mover. Someone just didn’t know what they had.

“Redmond will never want for anything again. All that is required of him is to never worry that he must convey his message clearly in a short period of time to save his own life. I am so lucky to have him — shame on those that abandoned him when he needed them most.

Redmond would not be here today if he hadn’t literally asked us to save him. You could almost say that Redmond saved himself. A very smart and perceptive horse to be sure. But my heart skips a beat when I think about how close he came to death. 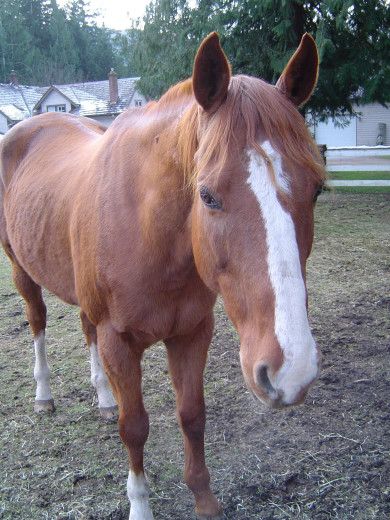