ADOPTED!! by Kelly A of WA

Tess is one of three mares seized by animal control in Snohomish County after they were discovered hidden in a barn, locked in filthy stalls, and starving. Tess was severely underweight when she was seized, with bad feet from lack of hoof care and from standing in her own waste. The horses were signed over to SAFE in late December, four months after their seizure. Tess made a great recovery and with some refresher training, she was ready for adoption. She found a great home with Kelly and her family, and the pair recently won Champion SAFE Alumni Horse at the 2016 SAFE Show!

and the Champion SAFE Alumni Horse for 2016 is…

We were thrilled to have Tess (now known as Purty Girl) and her adopter Kelly competing at this year’s SAFE Benefit Horse Show! Out of all the SAFE Alumni who competed at the show, Tess and Kelly earned the most points, competing in Western, Ranch Riding, Trails, Agility, and even the Gambler’s Choice Trails Challenge. Here are a couple of photos taken of Tess and Kelly by show photographer Karen Wegehenkel: 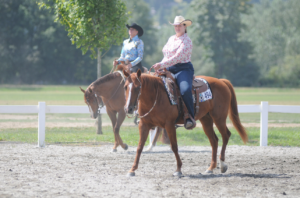 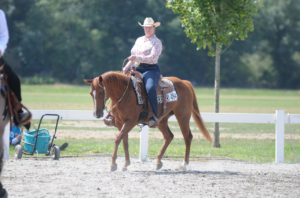 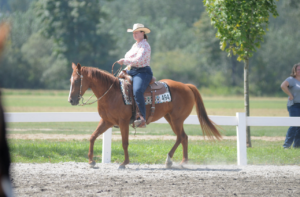 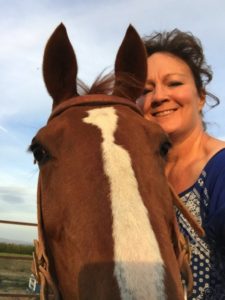 When a new horse arrives at SAFE, we never know what we might have on our hands. So we take time to get to know them and we give them time to heal and recover from their past neglect. Watching these horses transform is one of the joys of working with a rescue!

When three skinny Quarter Horse mares arrived at SAFE at the end of December, it hurt to see how thin they were. As they stepped out of the trailer, you could see the worry and pain in their eyes. The strong bond between the three girls played a large part in their survival. What they didn’t know was now they had all of our volunteers to support and help them into their new life.

Over the next few months they were given what all horses deserve: food, clean water, a dry safe place to rest, vet care, farrier visits and a ton of TLC. As their personalities emerged, one of the three–Tess–became a volunteer favorite. Hands down one of the sweetest horses we have had at SAFE, Tess loved attention and being with people.

Over the next 3 months, Tess and her friends grew healthy and strong. Once she reached a good weight, her teeth were floated by Dr. McCracken from Rainland Farm and our farrier, David Barron from Olympic Forge, began work on her hooves. All three of the horses had soft hooves, which made walking on gravel very painful. With good consistent trims and applications of venice turpentine to harden their soles, they all improved — especially Tess, whose soft hooves caused her the most pain. We knew things has turned a corner when turnout became playtime and the girls began running and bucking for joy on sunny spring days.

The next phase was to see if Tess wanted to be a riding horse. From what we had been told about them, we knew the two older mares were nicely breed with a ton of show experience. But it had been a number of years since they were ridden, so we decided to send Tess to Joel Conner for a 30-day restart. A month with Joel and Tess would be ready for a great new home.

Two weeks into her training, Tess was ready to start meeting potential adopters. Kelly visited Tess in training to watch Joel work with her, then tried riding Tess herself. Kelly is a beautiful balanced rider who seemed to click with Tess immediately. When she told us that she wanted to adopt her, we were thrilled. Kelly and Tess appeared to be a perfect match!

Tess spent 30 days with Kelly and her family during her adoption trial and everything went smoothly. Tess has settled into life on the farm and has even accepted the farm pig, who on first introduction she though was the strangest thing she had ever seen!

Here is an update note from Kelly on Tess’s adoption:

“I wanted to tell you how happy I am with Tess, aka Purty Girl. I was involved in a bad horse accident in 2010, I was lunging my horse when another horse being lunged got loose and ran into me, knocking me out and requiring multiple surgeries. Since then I have been using my daughter in college as an excuse as to why I haven’t been riding, Truth is — I was afraid. Any time a horse, mine or someone else’s, would act up, it reminded me of being hit by the horse and I would get panicky. I became less and less active with our horses.

Since getting Purty Girl, I have been riding almost every day. She has some spirit but has never made me feel unsafe or jittery. She loves to be petted and brushed as you know and that’s the best part, I can love on her all I want and she just asks for more. We have gone to a horse show to hang out with friends and this week we went to a Team Sorting practice. I am so happy being back in the saddle. Knowing that she needs / deserves that daily hug with her dinner has helped me immensely, if she can be so sweet after what she went through, then I can be around horses with less fear too. Thanks for all you do for these wonderful creatures. –Kelly”

Now with a home of her own and a family to love her, Tess has the life she has always deserved! It makes us happy to know that Kelly and Tess have both faced a tough road in life but together are stronger and can support each other. We love you, Tess, and are so happy to know you are now forever safe! 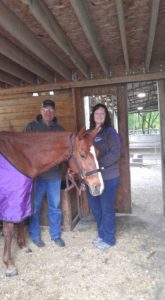 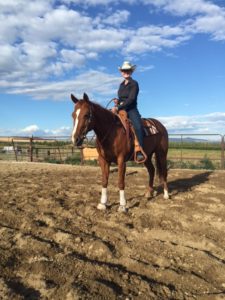 Getting to know Tess

We are happy to have three sweet new mares in our care: Tess, Bean, and Jessel. They were rescued from a very tough situation of neglect and starvation, and it’s going to take some time and TLC before they are ready for adoption. At the moment, we are letting them setting in to their new lives at SAFE. They are at a stage in their re-feeding program where they can have as much hay as they want, so that keeps them happy most of the time.

Of the three, Tess is one we are most concerned about. She’s still thin, and probably needs to gain another 50 pounds before she’s back to healthy weight. She also has very tender hooves and swollen back legs. She loves her mashes and finishes her hay but it takes her a long time. We have noticed she will spit up wads of half chewed hay; this is called “quidding”. A horse may start quidding when it does not get proper dental care. Teeth can wear unevenly, leaving sharp points that cause sores and ulcers on the sides of their cheeks or tongue, and that can make chewing very painful. So first up for Tess and the two other girls is some much needed dental care.

The swelling in Tess’ back leg goes down with turnout but with the cold and rain she isn’t moving around that much. We’ve started hand walking her to help the swelling. (See below for video, it’s pretty cute!) If we need to, we will start wrapping her hinds at night. All of her heels are soft but the worst is her left hind. The frog and heel are very soft and when she arrived it was painful for her to have it picked out. We have been treating it with a product recommended by our farrier and in just a week it is already showing signs of improving. It looks like she has also had a few old abscesses that have already ported. We could see more abscesses pop up as her hooves and immune system correct.

Tess is a very sweet girl, who seems to know that she’s arrived in a SAFE place. Hopefully in another couple weeks, she’ll be looking and feeling a lot better. 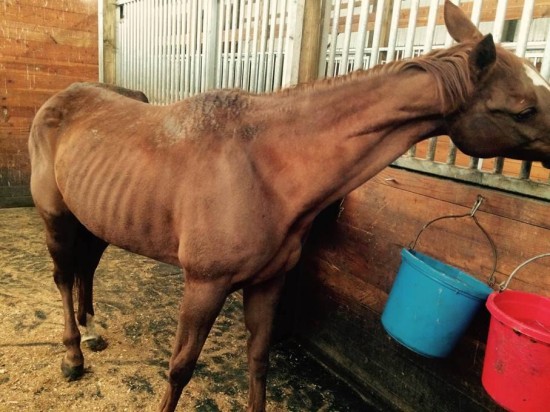 Tess, prior to seizure 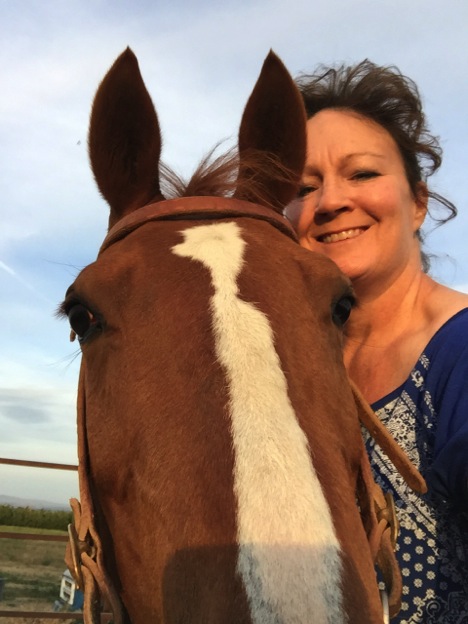