Pogo was surrendered to SAFE by his owners who were not able to keep him or successfully rehome him as a stallion. SAFE had originally arranged for Pogo to be gelded at home, but the vet was concerned that his owners didn’t have the skills or the space to provide him with necessary after care. So in the end, we felt we had no choice but to take him in.

Pogo is cute as can be, but prior to being gelded and handled with consistency here at SAFE, he was very nippy and attempted to bite several volunteers. He’s a silver bay with a dark body and a long flowing flaxen mane.

Pogo brought his stallion attitude with him to SAFE. Before being gelded, he made a name for himself around the barn (specifically “Hannibal”) by being very nippy and attempting to bite several volunteers. His bowl cut didn’t help either: his thick forelock was bluntly cut off just above his eyes. It looked pretty silly.

In March 2019, we heard from Julianne in Snohomish, who was interested in adding Pogo to her herd as a driving horse and family pet. SAFE’s Joel Conner clinic was just around the corner so she took Pogo to the groundwork portion. After just three days of the clinic with Julianne, we saw a huge transformation in his demeanor.

We are thrilled this little cutie has found a forever home where he’ll continue to progress–and his forelock will have a chance to grow out! 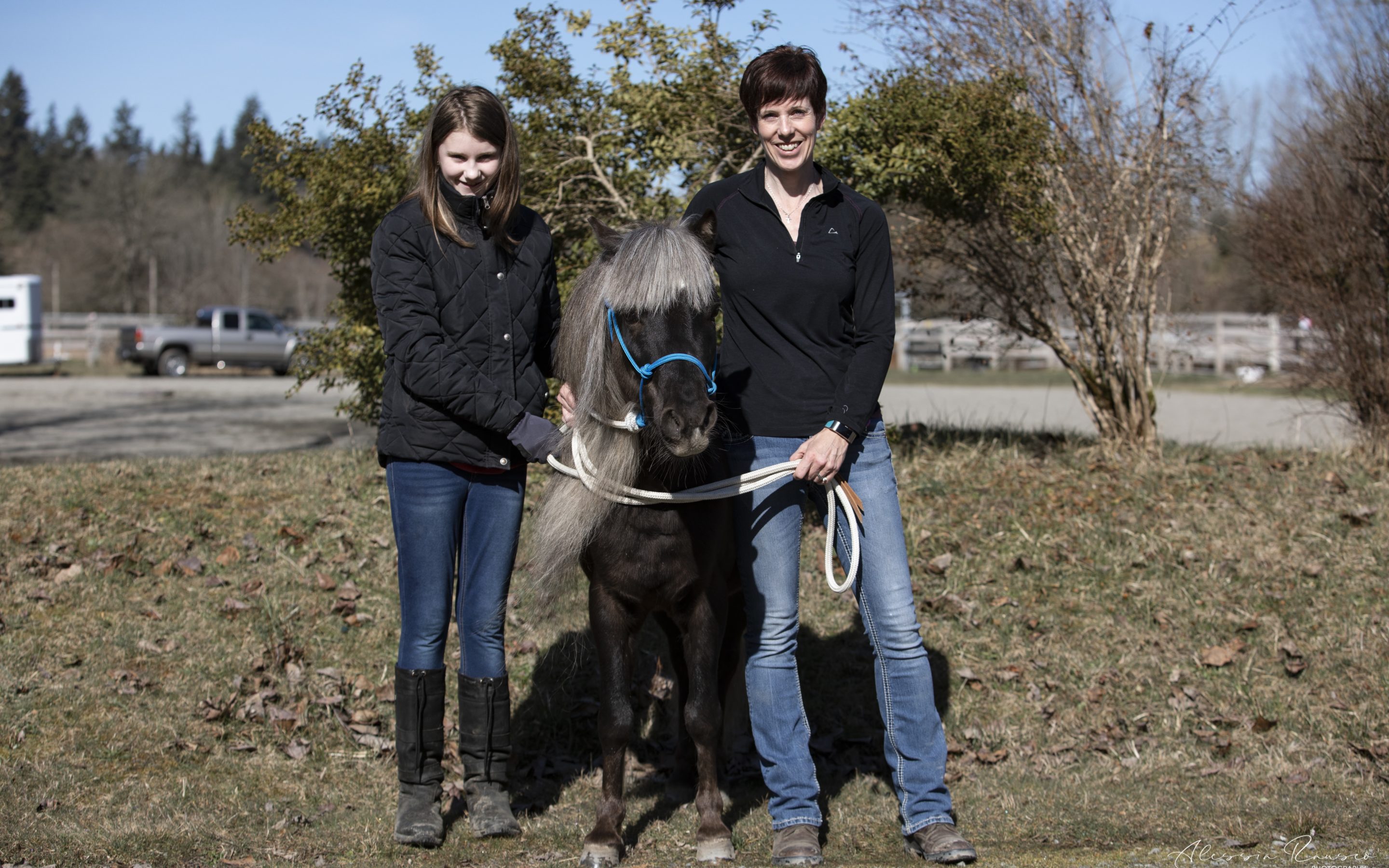 Pogo has been adopted!

Small but mighty Pogo has found a home! Julianne reached out to SAFE interested in adding this pint-size cutie to her family as a driving horse and family pet. She and her family came to meet him and were fully informed of his current behaviors and the progress he’d made, but that he still needed some work. Having some experience with manner training, Julianne took the lead and worked well with Pogo. She gave him fair corrections and it was clear that she could handle him and keep him on the right track for training.

Right around the corner was SAFE’s Joel Conner clinic. We asked if Julianne would like to take Pogo into the groundwork portion of the clinic before taking him home and she agreed. Within the three days of the clinic we saw a huge transformation for Pogo. By Sunday he was calmly walking around near the other horses, respectfully listening to Julianne and acting like a very sweet gentleman!

Reports from his new family all have been well. He likes playing along the fence with their 16H gelding and has relaxed about the mares even when they are in season. SAFE is excited to see the progress this cutie makes with his new family and proud to say he is successfully placed with a loving forever home! 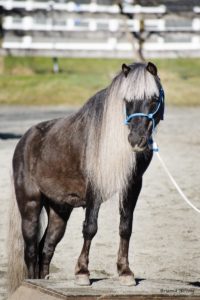 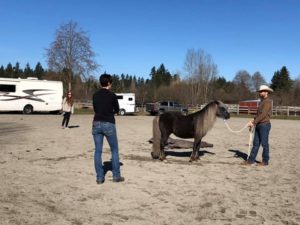 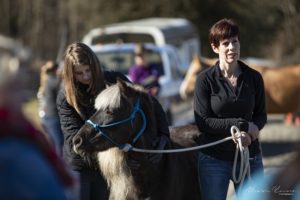 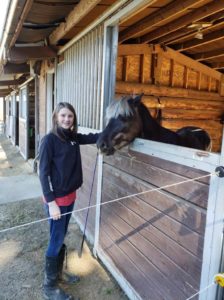 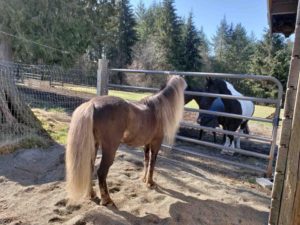 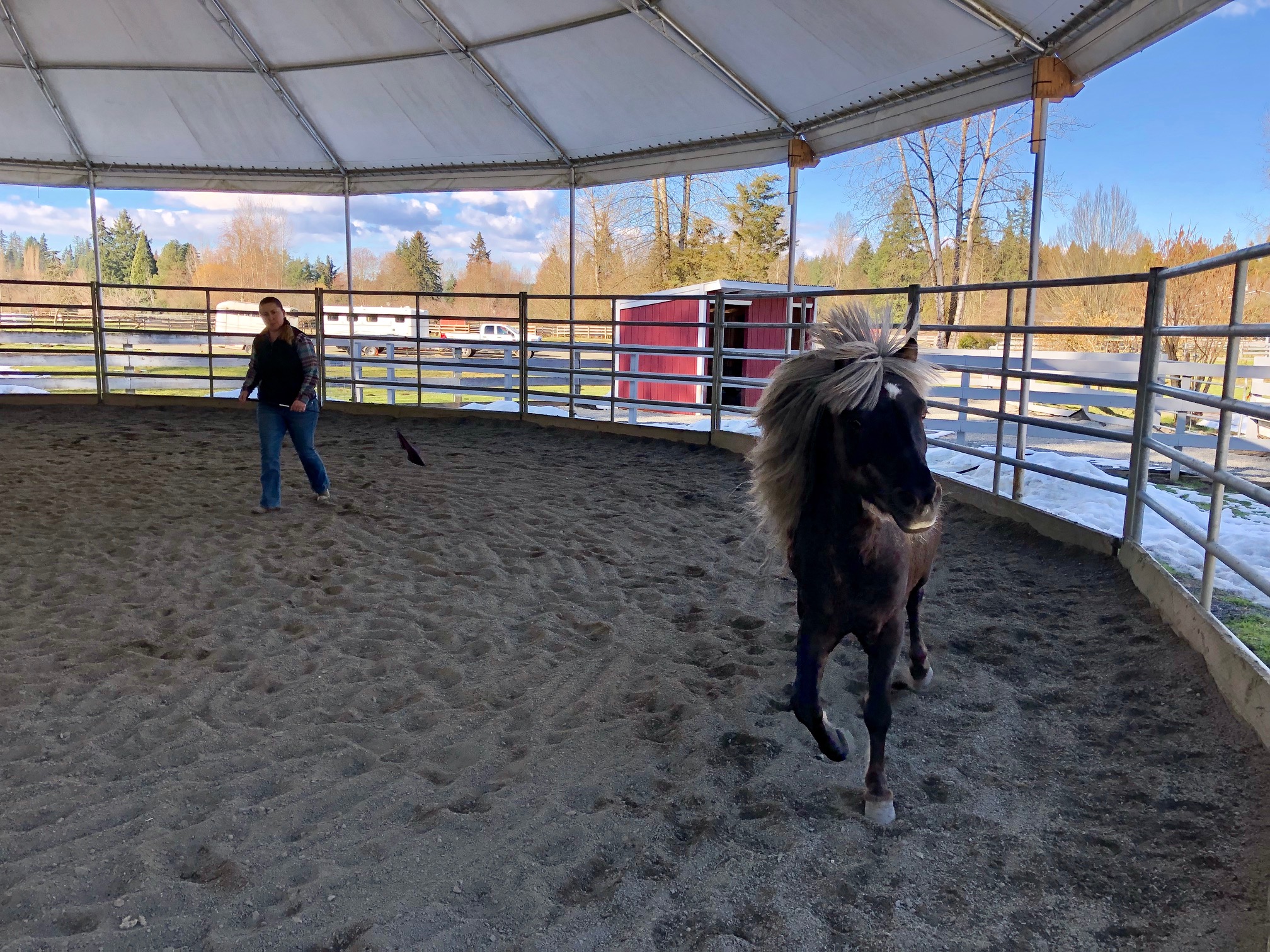 A Happier Outlook on Life for Pogo

It has now been a few weeks since Pogo’s castration. Before the procedure, the testosterone in his system gave him a very large personality in a tiny package. Sassy would have been a huge understatement, and he seemed to be in a constant state of angst. Thanks to his small size he was still relatively easy to handle, but his go-to reaction to people was to lash out and bite.

Fast forward to today, and Pogo is well on his way to becoming a new horse. Every day he becomes a little more pleasant to be around. We have started doing some groundwork with him, and we are diligently working on resolving the biting issue. He has been placed on Regumate, a synthetic hormone medication, to help improve his behavior during this transition period while the testosterone gets worked out of his system. Now that his sweeter side is starting to peek through, he’s really growing on us. He loves being brushed, and will stand still for hours to have his mane braided (once he’s had the chance to burn some energy off). Pogo still has a few weeks before we can expect him to act more like a gelding after coming off the Regumate. But each interaction with him gets a little more enjoyable–for the staff and Pogo both! 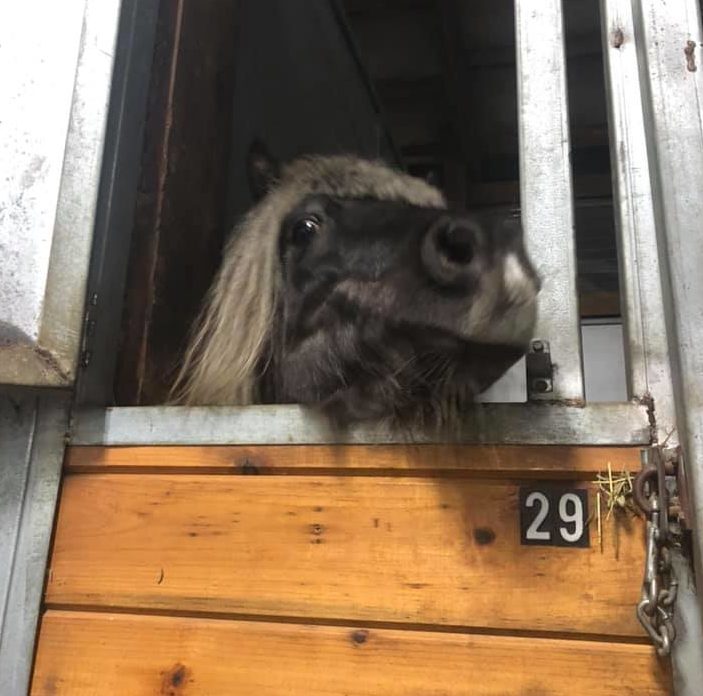 We have a new horse to introduce…a little horse…his name is Pogo and today he is a pony stallion, but that will change this Friday when Dr Fleck arrives to transform him into a happy gelding.

Pogo was surrendered to SAFE by his owners who were not able to keep him or successfully rehome him as a stallion. SAFE had originally arranged for Pogo to be gelded at home, but the vet was concerned that his owners didn’t have the skills or the space to provide him with necessary after care. So in the end, we felt we had no choice but to take him in.

Pogo is cute as can be, but he’s very nippy and has already attempted to bite several people here at SAFE, so we are handling him with caution. He’s a silver bay with a dark body and a long flowing flaxen mane. Sadly, his striking appearance has been downgraded a bit because someone gave him a terrible haircut: his thick forelock has been bluntly cut off just above his eyes, and it looks pretty silly. Pogo needs a hairdresser who can fix this bowl cut until it grows out!

We’ll have more to report about Pogo in a few days after his gelding procedure. In the meantime, he’s in quarantine at SAFE for the next three weeks. 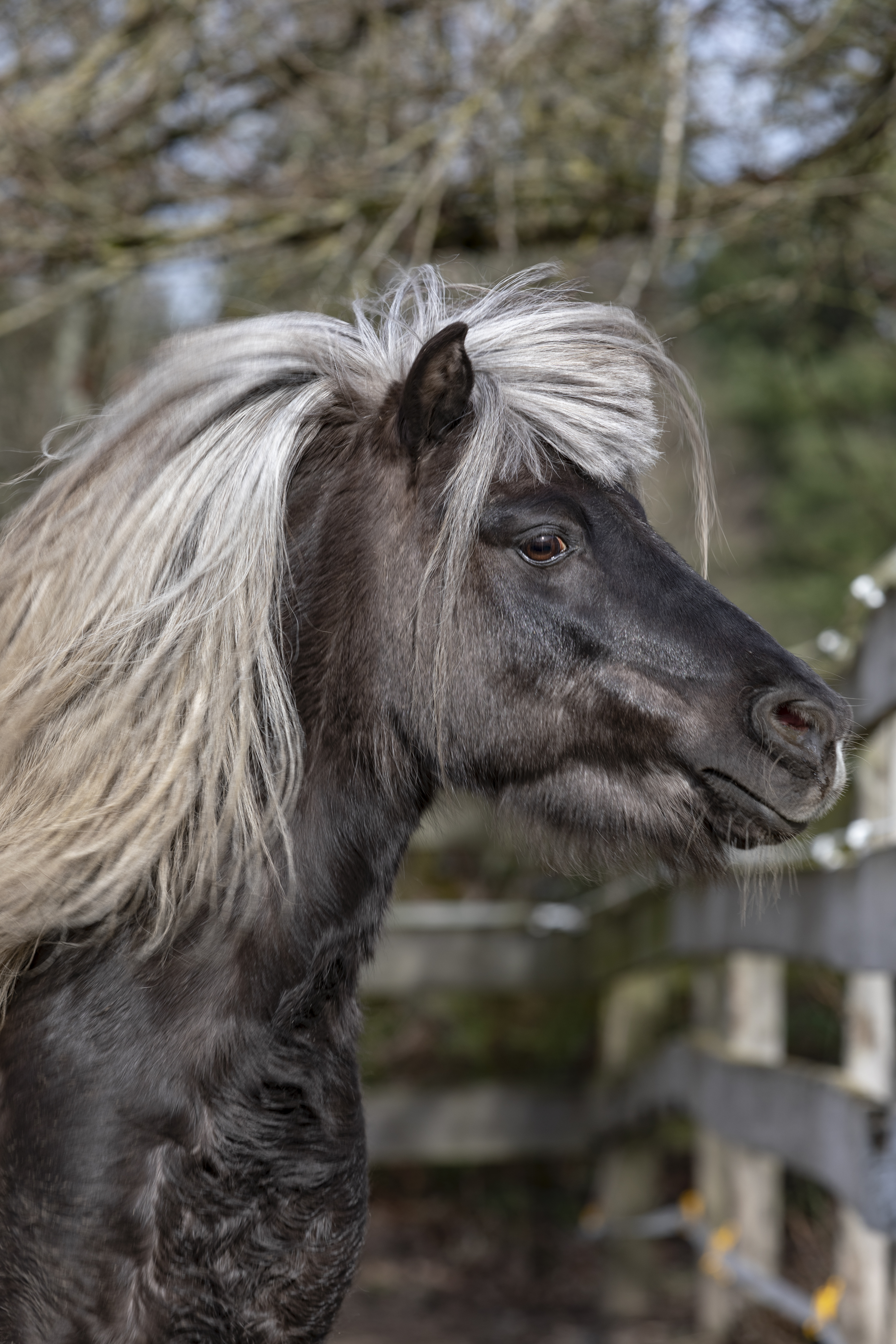 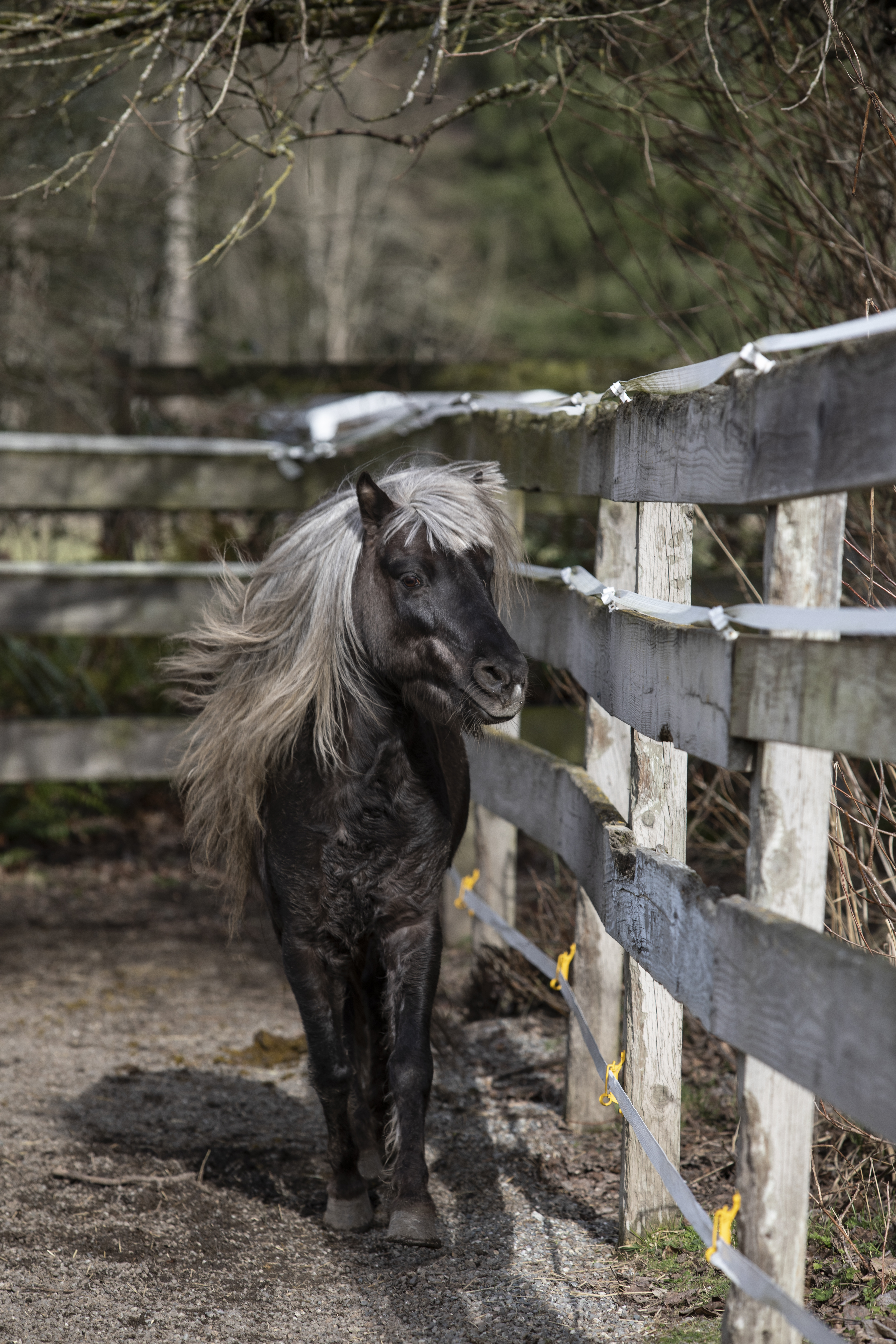 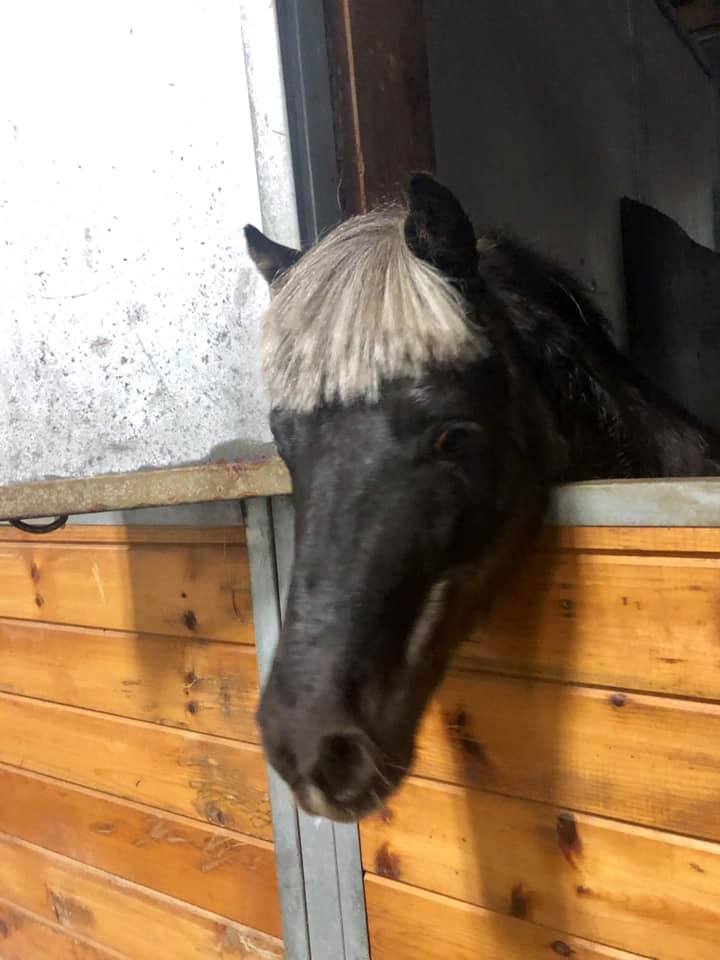