Sierra was originally rescued by SAFE in 2006 when she was just six months old. She was adopted later that year and spent 10 years in a good home where she was well cared for. Unfortunately in 2016, her adopters were no longer able to care for her, and she was returned to SAFE. She was in perfect condition but she has not had any formal training in her life, and was not started under saddle. SAFE volunteers prepared her for training with plenty of groundwork before sending her to Joel Conner to be started under saddle. Sierra became a favorite of Joel’s who nicknamed her Sweet Caroline because of her sweet disposition and willingness. Sierra caught the eye of a SAFE supporter name Donna C who went to Ellensburg to see her and began working with her regularly once she returned to SAFE. Donna boards Sierra close to Safe Harbor Stables at the same barn as Dyna, so we will see the two of them at the park and at future SAFE events and clinics. Sierra loves her new mom, and we could not be happier about how this adoption turned out for this sweet mare!

A Perfect Match for Sierra 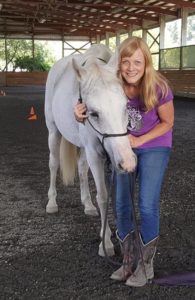 Nothing delights us more than to write these types of announcements and this one is very near and dear to our hearts. Donna came to SAFE like many other people do…by filling out the application for a horse with a pretty picture. After talking with her on the phone Terry knew there was a very good chance that Sierra would fit the bill for Donna. But there was one problem…Sierra had just barely been started under saddle! She would need a few more weeks in training and then a few more weeks before Donna could ride her. Luckily Donna trusted us and was open to the idea of waiting until Sierra was ready.

Donna started volunteering at SAFE weeks before Sierra came home from training! She helped Terry with other horses and we talked a lot about green horses and how she needed to prepare for Sierra. When Sierra came home Donna visited her four times a week. She helped groom her, do ground work with her, and began riding her. She was happy to start slow at the walk and before long she was riding at all the gaits. This gave the pair a great chance to bond before leaving SAFE and a little more time for Sierra to get confirmed under saddle and even out on the trails!

There is so much we love about this pair and we look forward to many great updates on their journey together. Donna had this to say about working with SAFE and adopting Sierra: “I want to thank you all so very much for all of your support during my time there these past 3 months getting to know more about Sierra and about SAFE! You have all been so helpful and friendly and I feel extremely grateful for all you have done for me. A special thanks to Terry for all you have taught me and your patience and very calming, always consistent presence as I muddled through my many hours of learning and re-learning. You are the absolute best!”

Little Sierra is settling in well and beginning to make friends with her new family. She is doing some vocalizing (surprise) and has made many new people friends as they go to pet her to let her know she is OK. (She may be hollering because she has learned that when she does, she gets lots of petting!) We all know that Sierra can easily wrap you around her little hoof with those big sweet eyes. Be warned Donna, she is a charmer! All our love and hope for you both on the wonderful adventure ahead!

Here are some fun photos of Sierra and Donna at the Joel Conner Clinic. This was her first days back at SAFE and Donna’s first ride on her. 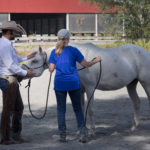 Getting some love from Joel! 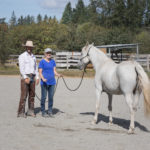 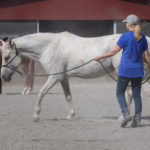 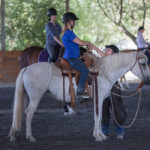 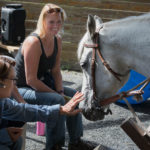 Visiting with the auditors 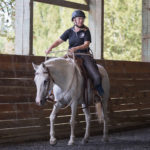 Terry riding Sierra in the clinic 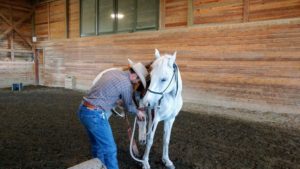 FINALLY!! This pretty little mare is off to get started with Joel. Since we moved to the new facility, I have preparing Sierra for her start. She did really well transporting over to Ellensburg to Joel’s facility and settled quickly. It was great to watch the first work with Joel and to see how well she accepted a rider.

Here are a few photos of Joel working with Sierra — you can see how great she did these first days. Since dropping her off, Joel has let us know she continues to do well. He said she is going to be an easy horse to adopt out and is “a sweet little thing”. Always good to get glowing reports from the trainer on our horses! 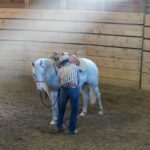 1st time with a back cinch. 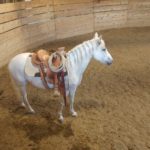 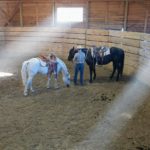 Relaxed and ready to work 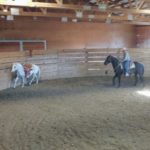 Learing to move around the arena. 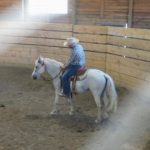 1st time with a rider. 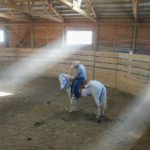 Learning how to bend. 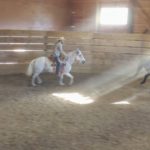 Having another horse in the pen help encourage her up into the lope. 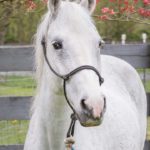 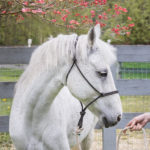 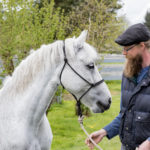 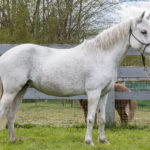 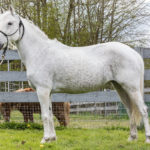 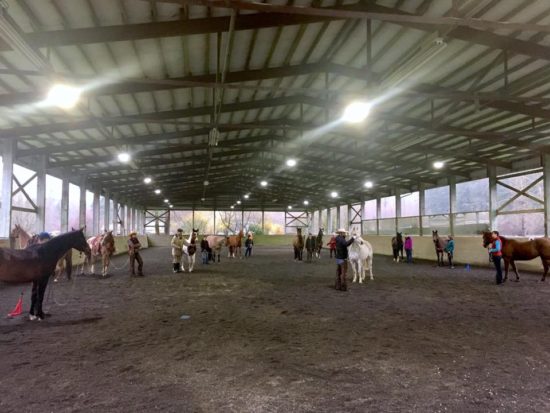 Horses never cease to surprise and amaze me, both in their adaptability and intelligence. For the past 10 years, Sierra lived at the same farm with the same people and the same horse friend. So bringing her back into the rescue was undoubtedly going to be a bit of a shock to her world. However everything I thought she might have trouble with, she has been able to cope with and carry on.

She first shocked me when we went to pick her up and she jumped right in the trailer, really by accident. I was getting the dividers ready and talking to Lori who had come along to help load her. While we were chatting, Sierra jumped in the trailer! It’s like she said, hey I think I should go check this thing out. She traveled well and when we got home she took just a little while to settle in and hook up with Nala, her soon to be turnout buddy.

The move to the new facility was easy enough, but we had two mare groups that became herd bound and began calling and panicking when they couldn’t see their friends. Sierra was one of these mares. For the first few weeks, we had to work on ways to help ease these bonds and replace them with more independence, self confidence, and looking to humans for guidance.

Here is where the biggest transformation happened for Sierra. Helping her overcome her herd-bound issues might be the single most important thing that happened in her training. The foundation laid in the last few weeks has changed so much about her. She is happy to be working with me, not panicking when alone, and likes to be joined up with humans now and not just horses.

A few things made this happen. One was the help that Joel gave us at the March clinic. When Sierra would begin to call out to the other horses, he had me simply ask her to do a little work. The key here was not to come at it with any aggression or reprimand but rather just a request to pay attention to me. If she didn’t want to stand with me quietly then we would just do a little work. Nothing over the top or big, just a little hind quarter, front quarter yielding, then back to quietly standing. It was even better if I could ready her energy and if I could catch it right before she called out. This improved greatly in just that one session.

The second thing that helped was preparing her to be tied and working her while being tied. This might be easier to see than explain but I will try to do my best. After I knew that she would give to pressure and come forward off the lead, I tied her. Then I asked her to yield her hindquarters and immediately release my pressure by turning away from her. This helps her know that she is not trapped and that she can move her feet and turn to look out of either eye. I then could work with another horse while she relaxed and found patience standing. If she would call out or start to paw, I would just ask her to move her feet and yield her hind. After just a little time, she was quiet and relaxed. I then untied her and we did just a little groundwork. She was a completely different horse! She was not pushy, not calling out, and very attentive and soft to work. I immediately gave her lots of low energy praise to keep her relaxed and put her away. Bringing her out the next day, and every time since, I know that we did this right and got a lasting change. I don’t do too much, I end at the right time and put her away in a calm and relaxed state. This is the hardest thing to learn as a horseman, not to go through the good to get to the bad. Ending on a good note can mean the world of difference in seeing changes that carry through to the next session and became the foundation of future work.

Sierra has made some amazing progress since she returned to SAFE. I am excited to get her ready to go to Joel’s to be started next month and look forward to seeing her blossom into a riding horse. I think she is going to make someone an amazing friend and partner! 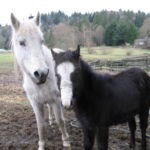 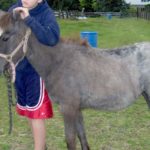 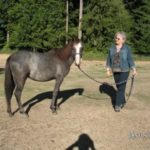 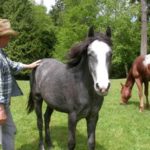 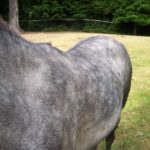 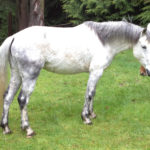 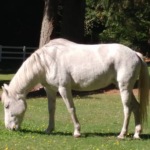 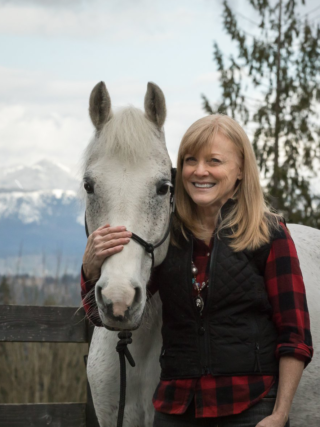