Caramel is one of 24 wild Yakima Reservation horses seized in December 2019 by King County Sheriff’s Office, in cooperation with Regional Animal Services of King County and SAFE. 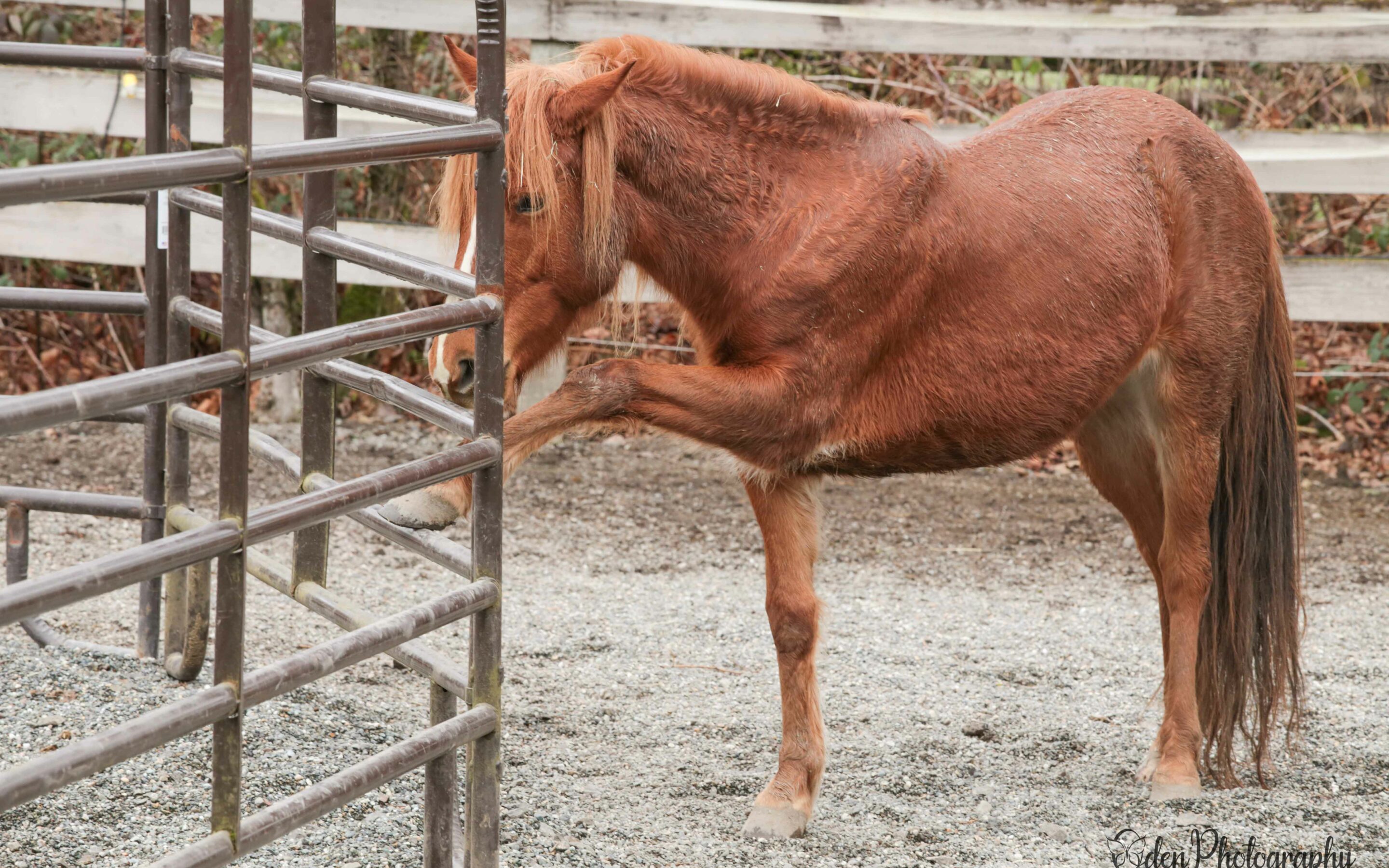 Caramel is working on trusting people to handle her hooves. These videos are the result of a ton of patience and relaxed feel with Trisha lifting her hoof. What amazing progress this mare is having with her kind foster mom! No expectations and no timelines. Everything for the horse and what this special mare needs to find trust as a domestic horse. Thank you Trisha for providing the learning environment that Caramel needs. 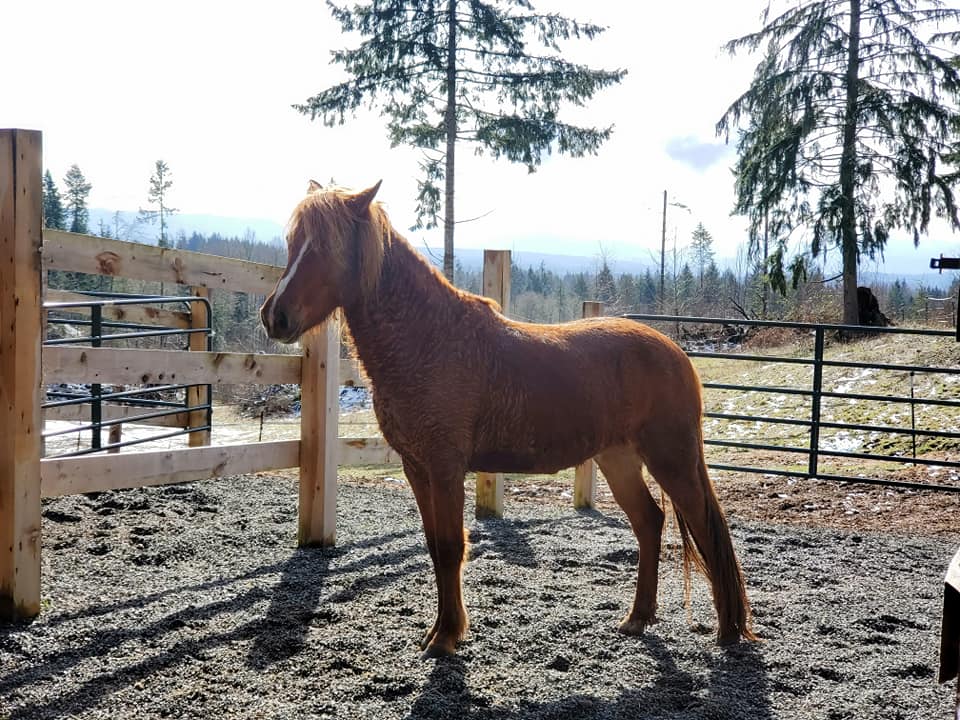 Caramel is off to Foster

Today was a BIG step in the future success of Caramel. She is headed to a foster home where the views are fantastic and she is surrounded by other horse friends. Trisha, who is now fostering Caramel, adopted one of the Fall City 40 horses, Hazel, last January. She did such a great job gentling her that we are thrilled that Caramel will have the same opportunity to learn. Trisha will be able to give her the time and consistency she really needs.

Caramel was a gem for loading and unloading in the trailer and Trisha let us know that she is settled in well. Trisha’s mare, Hazel was living in the same pen in Fall City as Veronica and Caramel. Hazel was surprised to see the little redhead again and quite possibly recognized her. We are hoping that this quiet and relaxed approach will help gentle Caramel. 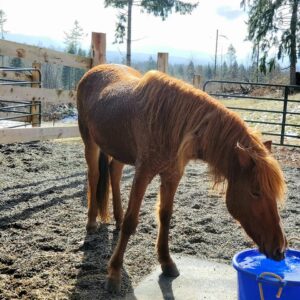 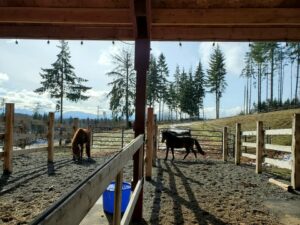 Caramel and her buddy, Hazel 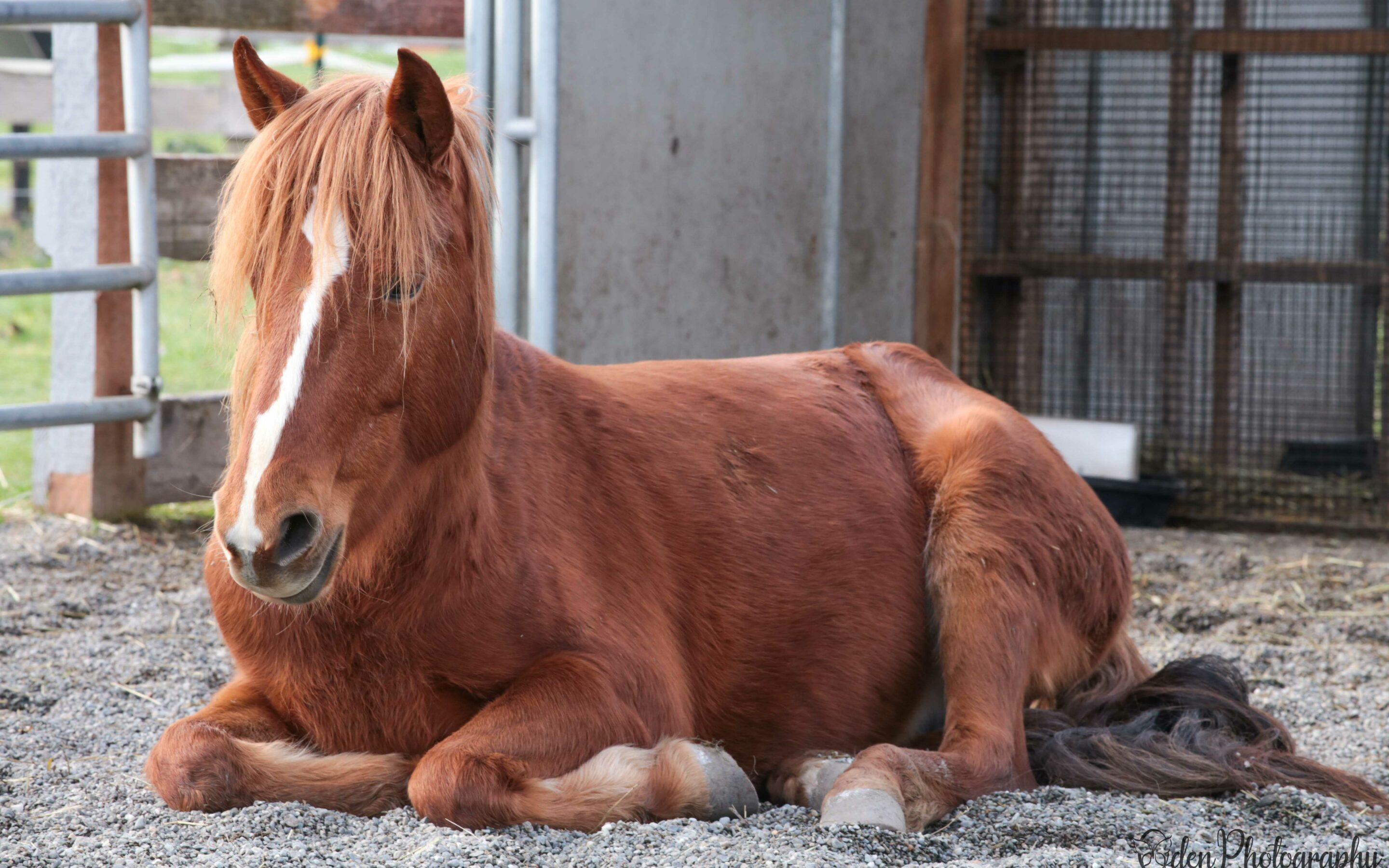 One thing I love about SAFE is that we have no expectations or deadlines that our horses have to fulfill for us. We accept them as individuals and recognize that one size doesn’t fit all.

As we got to know the Fall City 40 horses better, we found there were many different personalities among them. But there were two mares in particular who seemed far more troubled than the rest of the group. Both ended up joining SAFE’s herd when homes couldn’t be found for them right away. They were scared, and we knew that pressure from humans could make them feel like their lives were in danger. So we made a conscious decision to turn the pressure way down and begin their reeducation by just spending time near them.

Over the last year, Veronica and Caramel have been slowly brought into domestic life. Veronica, while clearly a sensitive mare, was a bit more confident and willing accept human’s touch. SAFE volunteer Candi was asked to make Veronica her special friend and to spend time visiting her whenever she could make it out to SAFE. Candi has spent HOURS sitting with Veronica, calmly petting and eventually grooming her. She then starting haltering her and eventually leading her, then began groundwork: freeing her hind and shoulders and walking and trotting on a unified circle. Last Friday I checked in on their progress and I was very impressed. Veronica is SOFT, willing, and gentle on the lead. She allowed me to lift all four hooves and to walk her out of her pen and into the outdoor arena. The other “yahoos” in the paddocks nearby erupted with excitement and Veronica was ready to fly…but instead of leaving me, she listened to my supporting feel as I asked her to stay with me and to drop down the excitement. She was hunting and searching for my support, even in an excited state she looked to me, this strange two-legged human, to give her the comfort she desired. We were able to end the session grazing along the grass of the “yahoos” pens and show them that good girls get yummy grass! HA!

Caramel, is a very inquisitive and smart little mare but her flight response is out of this world. She would rather run as fast and as far away from something that scares her than take a moment to see it really was nothing to be afraid of in the first place. Her instinctual nature to save herself is deeply ingrained. Unlike Veronica, there is a lack of confidence keeps her from checking in before checking out. Nevertheless the progress she’s made is really quite huge. Today when visiting with her, she was very curious and interested in being near enough for a stroke on the face or neck. But make any sudden movement, and she said goodbye. I actually think she really wanted her hind scratched but couldn’t bring herself to getting close enough to be touched without the fence between us. From the other side of the fence, Caramel is pretty open to being touched just about anywhere. The fence gives her the comfort, since she can’t be caught by someone on the other side of it. If she even sees a rope or halter in your hands, she is very unlikely to approach.

We’ve thought a lot of about Caramel to try to figure out why she is so different that other mares in our herd. Many vets and horse professionals have told me that the Yakima Reservation horses are like “Wild Cats”. I’ve seen it in a few of them, and clearly Caramel is the wildest of the horses we kept from the Fall City 40. She might be like this because of inbreeding, missing important nutritional elements in her early years, or being traumatized by living on such a small property with multiple stallions fighting for herd position and limited food.

Bonnie sent out numerous letters to wild horse sanctuaries on the west coast in hopes that one might be willing to take her. They all declined. But even if they had said yes, it still didn’t feel like the right answer for Caramel. She was born in captivity in Fall City, not on the open plains of some romantic western scene we want to dream for wild horses. In a sanctuary herd, her basic needs as a domestic horse might not be met. She would have no one to take care of her if she was injured or needed medical assistance. It just isn’t the life we would want to give her, nor would it keep with our promise to provide her a lifetime of safety.

Where do we go from here? How do we help Caramel reach a point in her gentleness that her basic needs like farrier, dental and emergency care are able to be met? Time and a slow approach is making progress. It is also allowing her to not be hurt in the process because when her flight response is triggered she could literally kill herself in trying to flee. She needs someone with a quiet place to let her absorb natural life along with a small herd that is constant and relaxed. She needs daily consistent interactions with one person so she can gain trust and eventually learn to trust other humans. In order to make it to the other side of this, she needs a very special friend.

When we first visited the Fall City horses in July of 2019, Trisha was a volunteer that came to help. She was drawn to the herd, their plight, and how she might be of service to them. Trisha had connected with a beautiful dark bay mare that was originally on the side of the property with Veronica and Caramel. She was a very skittish mare, similar to our two, constantly moving and “leaving the scene” whenever approached. Sadly, we had to walk away from the Fall City 40 for several dark months before we were able to get them seized by Animal Control. But in December of 2019, when the rest of the horses were ours, I reconnected with Trisha and asked if she was willing to take the mare. She wholeheartedly agreed and has done a wonderful job gaining her trust and gentling her.

When the sanctuaries unanimously turned Caramel down, I felt a bit deflated. I was losing hope that we’d ever get her over her fear. I decided to call Trisha and get her thoughts. Her Fall City 40 mare was a lot like Caramel and Trish had successfully brought her through it. Trisha was open to meeting Caramel.

Caramel really turned on the charm for their first meeting. She was very interested in us and especially in Trisha’s mask. We talked a lot about our hope to give her time and consistency in a calm and quiet environment. We agreed it was important to not the pressure of a timeline or expectations on Caramel. We are so excited that Carmel will be moving to Trisha’s farm as a foster some time next week! This will be a great chance for Caramel to grow her trust through dedicated one-on-one handling. We are optimistic for Caramel’s future and grateful that Trisha and her family are willing to give her this opportunity. 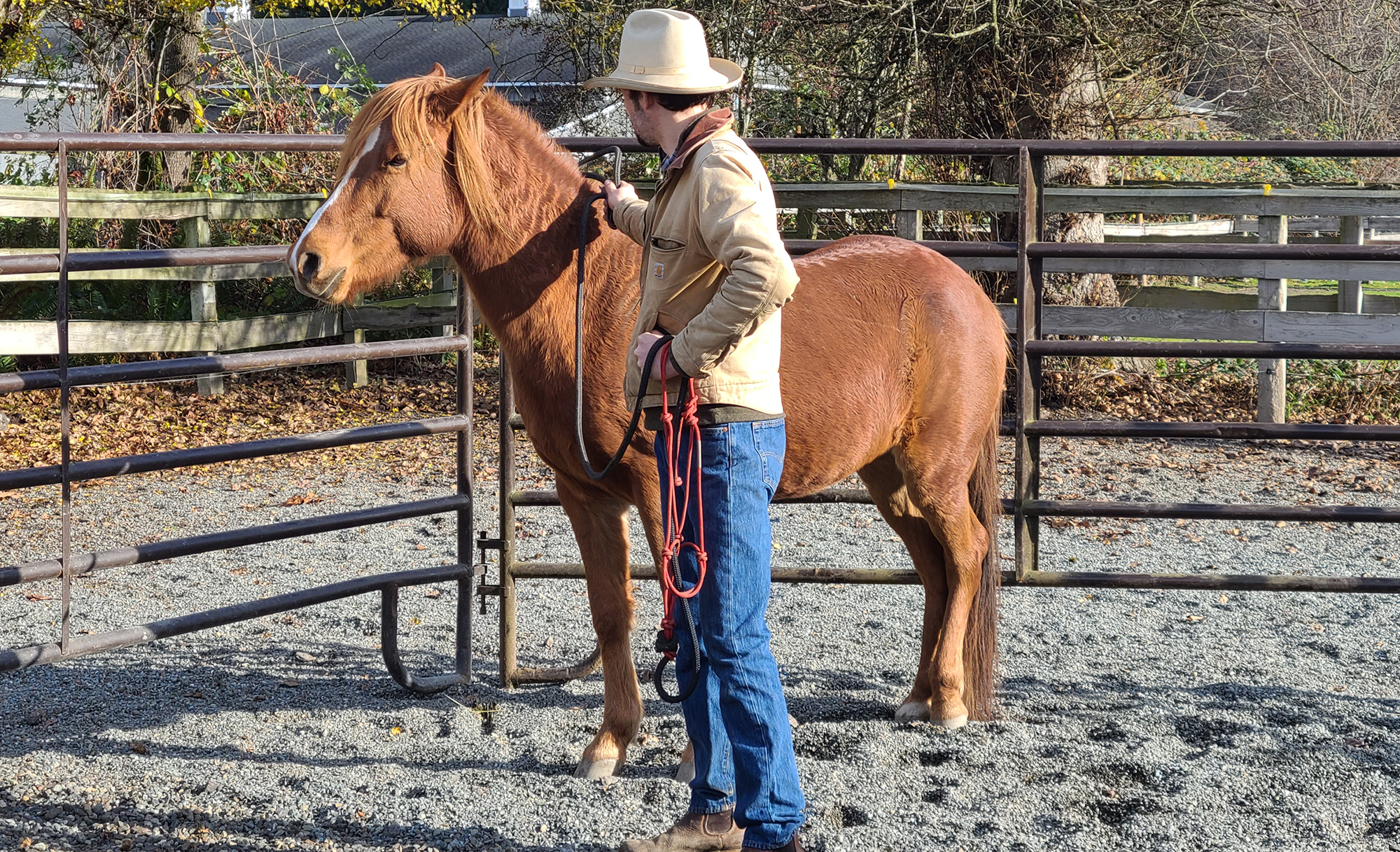 Caramel is Coming out of Her Shell

Caramel was one of the Fall City 40 horses, but she is really becoming her own beautiful self. She is very independent and is slowly learning to trust people. She has put on weight, her coat is shiny and full, and that mane of hers is beautiful too! 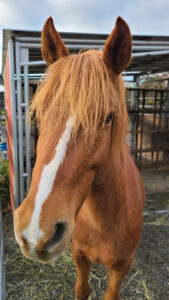 Caramel is still fairly timid. Over the summer we have been able to help her build her trust and confidence. She will now allow us to rub her forehead, ears and neck. We are working on rubbing her shoulders and back but she is still not completely comfortable with that yet. She has figured out that the brush and the curry comb are pretty amazing, so she will let herself be groomed for a little bit of time. She does love to have her butt scratched but only if the scratcher stands on the other side of the fence. She will stand there for quite a while and close her eyes.

Dylan has been working on moving Caramel around in the round pen. He has also been introducing her to the halter by touching her with it. We will take it slow in order to halter her successfully.

Caramel is a sensitive soul, and deep down inside she seems to want to please. She just needs encouragement and patience to come farther out of her shell. Once she knows she can trust, a whole new world is going to open up for her. 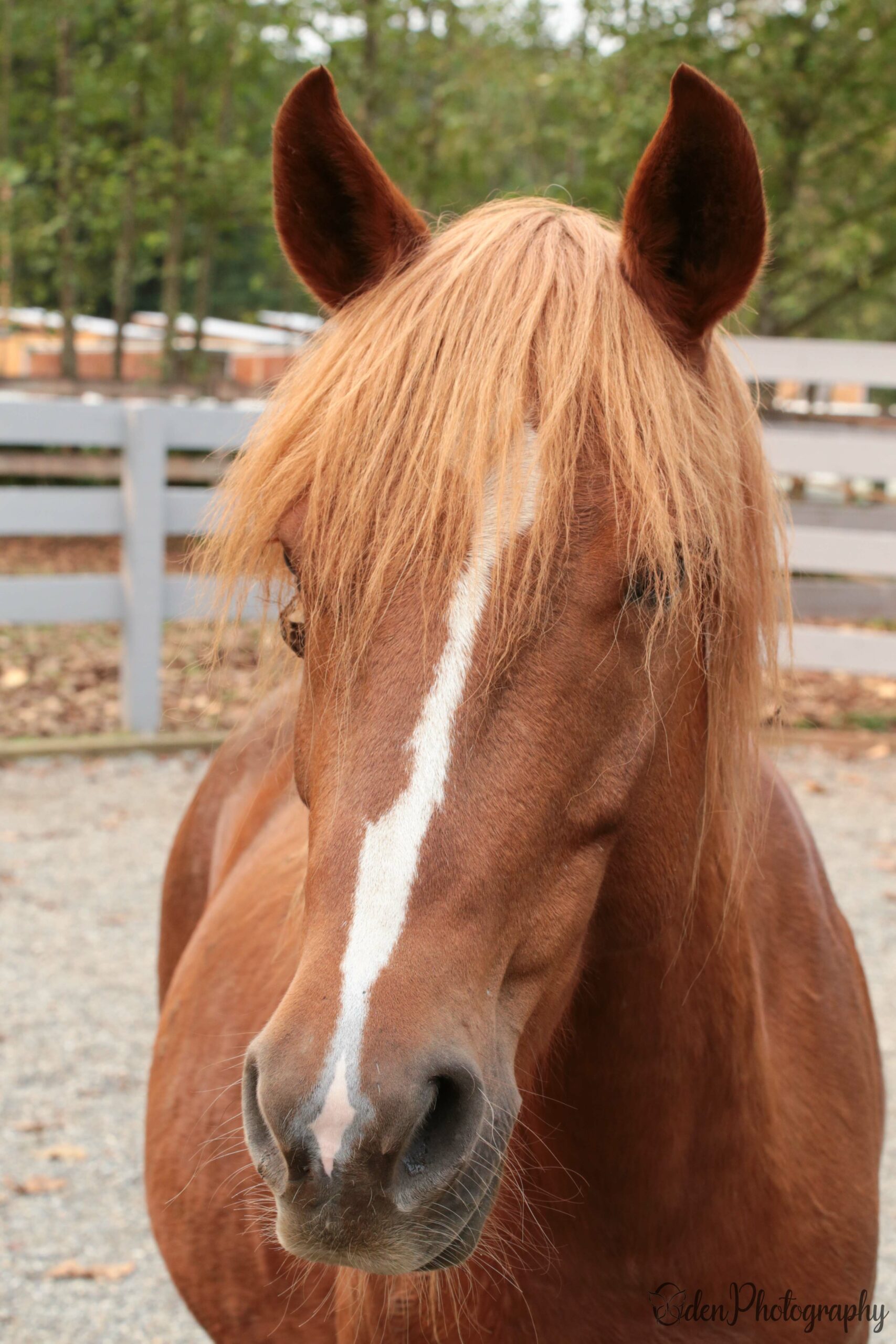 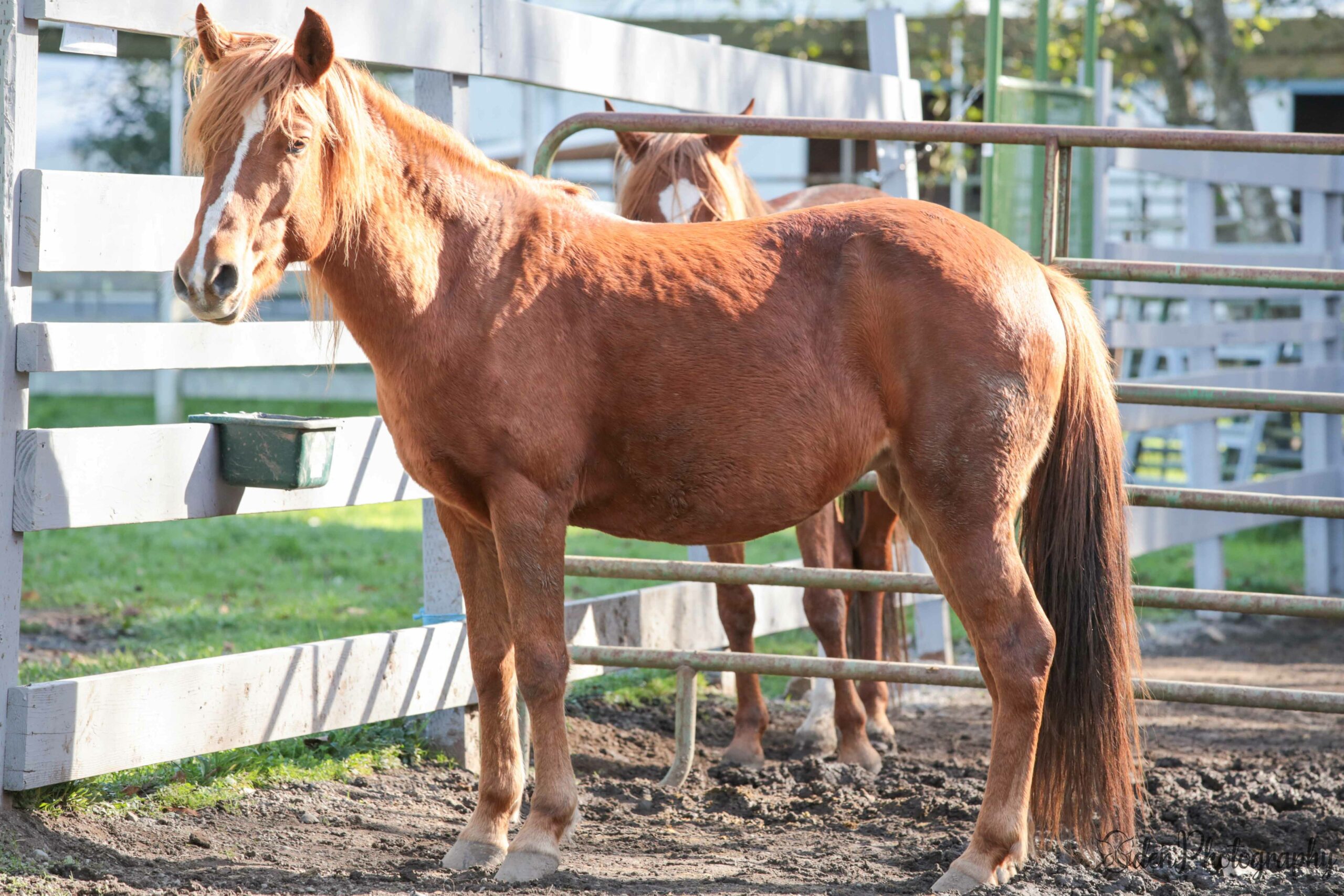 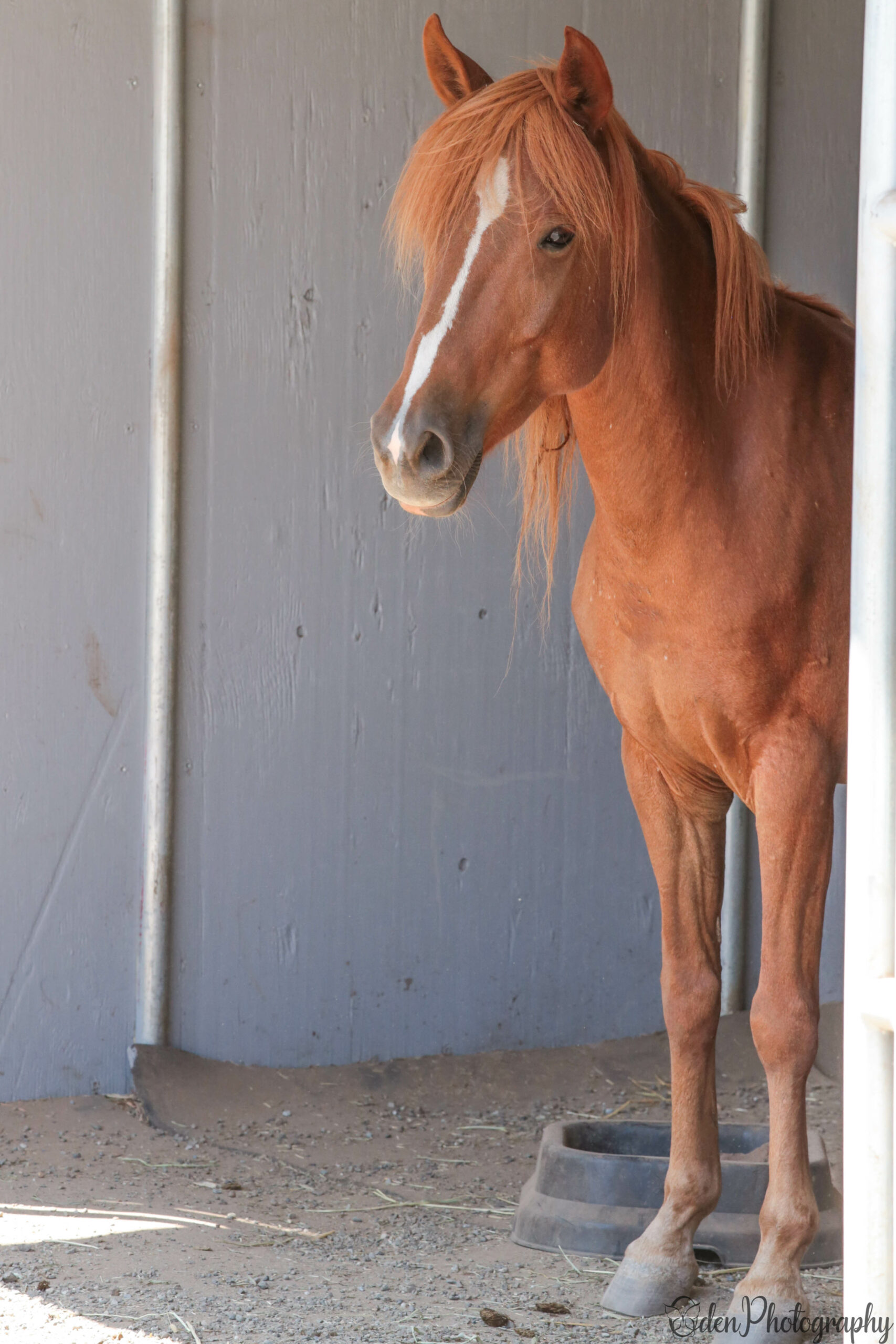 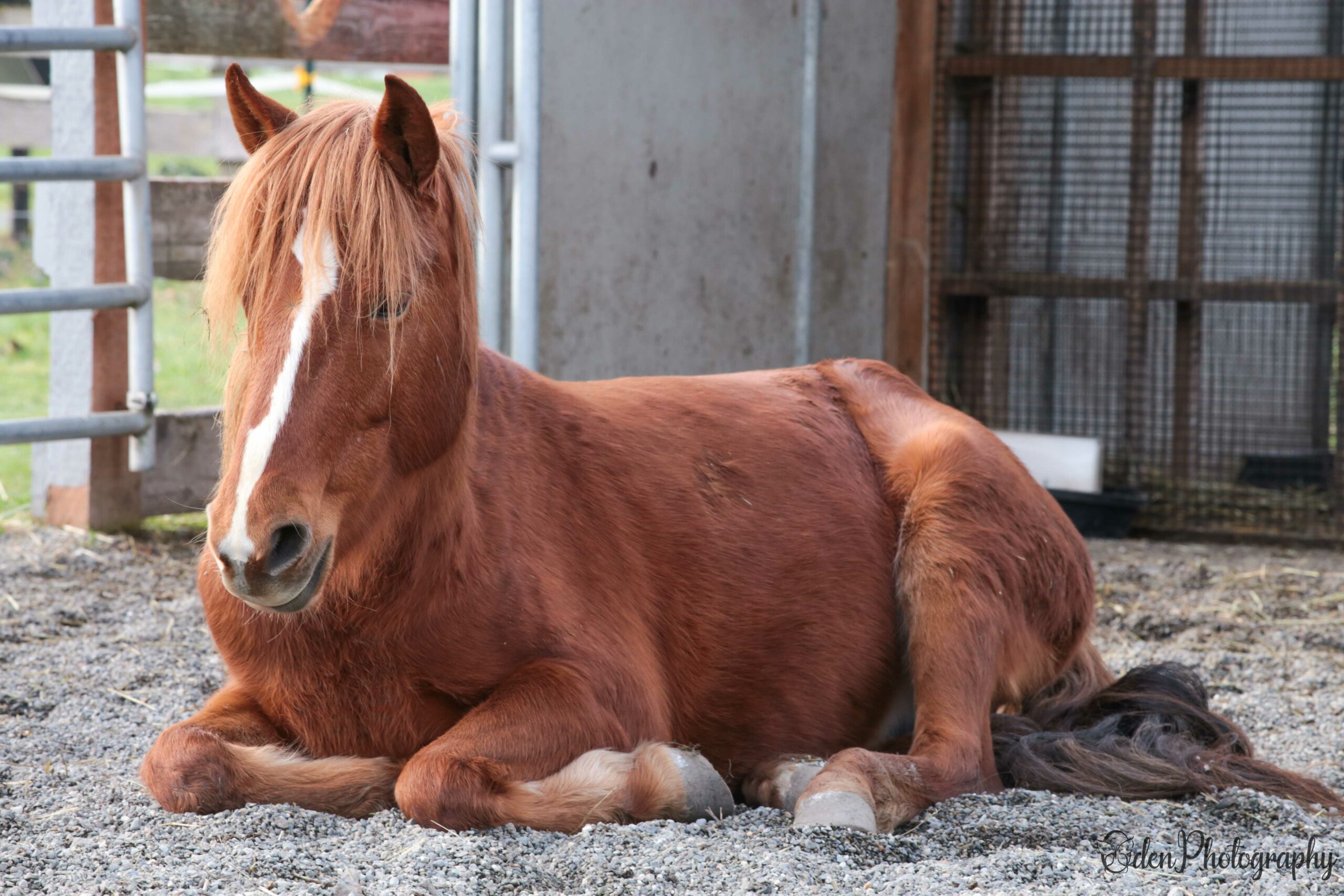 Every horse deserves at least ten friends! Even a small monthly donation can make a difference.