We have been working on strengthening Emmy’s stifles for the past few months. There have been a few small setbacks but we have been slowly working her up to weight of a rider. Her training currently is a combination of lots of walking both on the ground and with a rider and trot poles on the ground. We have also been seeing some results by keeping her on a small dose of Previcox anti-inflammatory medication once a day. We are currently trying to add a Turmeric Paste and then lowering the Previcox and hoping to see continued improvement. Happily, Emmy was able to participate in the Joel Conner clinic with the help of SAFE volunteer rider Sara S. Here’s what Sara had to say about her ride: 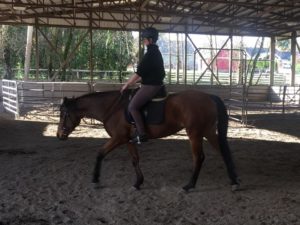 I rode Emmy in the Joel Connor clinic on Sunday afternoon. As far as I know this was the longest (nearly 3 hours) that Emmy has been under saddle in quite a long time, and she did wonderfully.

Erika and Tess and I (and probably others) have all been working on Emmy’s rehabilitation since she returned to Safe Harbor after her surgery and recovery. Both in ground work and under saddle, she has so much “try” and is always paying attention to her handler/rider, very responsive to cues. She was great at moving her front end out and back on cue when backing circles, and she also did well leg yielding at a walk. I was being careful not to ask to turn too tightly because of her injury, so we focused on this exercise in larger circles instead of a pivot on the hind legs. I was also able to get a “soft feel” and “thread the needle” from halt to walk and walk to trot, and also come back down to a walk or halt.

She does need more work to learn the cues from our seat/weight shifting when asking her to halt and back up, and also bringing her head in a bit more when we ask for a soft feel, so I tried to focus on these during the clinic.

Overall, I love working with Emmy and it makes me really happy to see the change in her disposition compared to when she first returned and was so nervous and flighty. She’s (re)turning into such a sweet horse, who will hopefully continue to heal and strengthen as we work with her toward finding her an owner who loves her as much as we do.

Here are a few photos of Emmy taken by volunteer Jessica Farren: 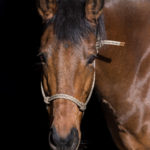 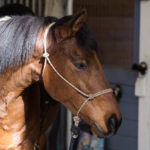 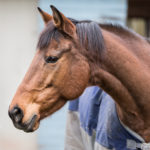 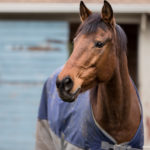 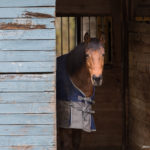 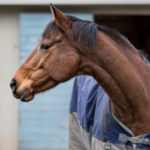