Who saw this coming? 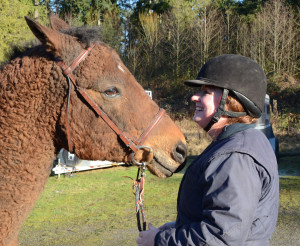 Owen has been adopted, and it will probably come as no surprise to anyone that his adopter is SAFE Executive Director Bonnie Hammond.

It was never our intention that Owen would end up spending his first spring and summer as a SAFE Horse on Bonnie’s farm in Silverdale, but we didn’t know when we accepted him into our program that the young Curly Horse stallion was not only untrained, but completely untouchable. And Bonnie will be the first to tell you that she’s the last person SAFE would choose to tame a stallion! But she and Owen made it work, and Bonnie credits Owen’s kind and willing nature as the reason she was able to slowly gain his trust. Fortunately they weren’t on a timeline, so they were able to make slow, steady progress. Owen was never studdish or aggressive in Bonnie’s care — he was simply afraid. So with calm, patient, consistent handling, eventually Owen learned to wear a halter and walk on a lead. He was gelded about three months after he came to SAFE and since he didn’t know how to lunge, Owen did all his post-gelding exercise at liberty, catching on immediately to Bonnie’s hand signals and voice commands and dutifully trotting in large circles for 15 minutes twice a day.

Owen made amazing progress, but he was still fearful and difficult to catch when trainer Matt Olson entered his life. Matt may be young but he has a gift when it comes to working with young horses. After just a couple of training sessions on the ground, a brand new Owen emerged…one that was social and friendly and easy to catch. It was amazing how learning boundaries from a trainer like Matt changed Owen’s interactions with the world, first with Bonnie, and then with everyone he met. Owen would continue to make friends wherever he went, but it was Matt’s work that started him in that positive direction.

After a month of groundwork, Matt stepped into the stirrup and sat on Owen’s back for the first time. He was prepared for fireworks, but none came. Instead Owen seemed stunned at this new development, but willing to give it a chance. As he gained confidence as a riding horse, he did eventually throw out some resistance to being ridden, but it wasn’t bucking or bolting…Owen just refused to move forward. As bad behaviors go, this was one Matt could work with. Soon Owen was going nicely at the walk, trot, and lope, and he graduated from training at the end of January, less than a full year from the day we met him and realized we couldn’t even touch him. 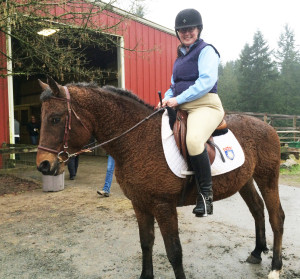 At the Sandamar schooling show

Along the way, we learned a lot about American Bashkir Curly Horses — a fascinating breed that descended from curly haired wild horses in the American west who were crossed with a Morgan and an Arabian foundation sire in order to produce the perfect ranch horse: hardy, versatile, smart, and sensible. Owen embodies the best of the Curly breed — he’s built solidly and he’s smart as a whip, very teachable and very good natured. Owen is an extreme Curly who grows a coat of curly hair in the winter (right down to his curly eyelashes) and sheds out to a smoother coat in the summer. He also sheds his mane and tail, an oddity that is common to extreme Curlies, and raises a lot of questions (like “what happened to his tail?”)

Bonnie took an amazing journey with this horse, and the bond they created was one that she was unwilling to break. So for the first time in nine years with SAFE, Bonnie adopted a SAFE horse. The two are now learning Dressage with the help of a familiar friend: trainer Brittney Stewart. Brittney loves Owen and admires his willingness to learn. He’s already reaching for contact and learning to carry himself correctly like a dressage horse, and he’s got terrific, forward gaits too! Bonnie and Owen also enjoy trail riding in the Redmond Watershed with their good friend Teddy, a big Morgan gelding who looks a lot like one of Owen’s famous ancestors!

Because of Owen’s unusual appearance, he will probably always be an ambassador for SAFE Horse Rescue — he makes friends wherever he goes and people find his story fascinating. From untouchable stallion to a talented young riding horse, Owen’s transformation wasn’t physical, but his entire life changed because of SAFE.