Chance is a Thoroughbred cross gelding that was one of the first horses rescued by SAFE in early 2005. He was supposedly a failed bucking stock horse who was so sweet and friendly that no one wanted to see him be sent to slaughter. SAFE paid his feedlot ransom, and the Exceller Fund stepped up to pay for a couple of months of training for him. He was soon doing very well under saddle, as he was apparently very uncommitted to being a bucking horse.

Chance’s owner was no longer able to keep him, due to financial reasons. His previous owner, who also rehomed him through the SAFE-Assist program, had this to say about him:

He was bred as a bucking horse, and I can only assume the unpleasant way in which he was handled/treated and “started”. Once they figured out he didn’t have the heart to buck they sent him off to slaughter where he was rescued by SAFE. As a result of his tough start in life, he has some trust issues. But once you build a relationship with him, he bonds deeply.

I adopted him so that my daughter and I could trail ride together. We had a summer of excellent fun riding. He has been all over Bridle Trails, Lord Hill, and the Redmond Watershed. He was a great trail horse. Will lead or follow, doesn’t mind water. Then my daughter was injured in a skiing accident. After surgery and physical therapy, the doctor recommended no more riding. *Sigh*

Chance needs an intermediate rider because he is a typical TBx…he is big, strong, and fast. He can sometimes get a little unconfident/worried. He needs someone who can stay centered and calm and insist that he keep his mind focused on what he is being asked to do. A confident rider with a good seat will have no trouble. He is ridden in a snaffle if that tells you how easy he is. I have never seen him buck under saddle. The one time I saw him spook under saddle was at a four wheeler going fast and loud. Couldn’t really blame him for that one.

Chance has mild fibrotic myopathy in both hind legs. Essentially, it is scar tissue in the hamstrings. Possibly due to an injury while at bucking school. It is a mechanical issue, which means he has less than perfect movement (drags his hind toes just a bit at the walk). It is not a soundness issue…he is never lame and it does not cause him any discomfort. Again, it does not prevent him from being ridden, and in fact he jumps a little as well. Probably not a good candidate for dressage.

He has one big quirk…his ears. He cannot tolerate them being handled. In fact, we unbuckle the bridle to put it on. I worked with him for over a year, patiently and quietly and got to the point I could touch them, but you cannot bend them to put a bridle/halter over them. It may be he was ear twitched. It is more likely because he has ear plaques that are tender. There is much discussion/debate about treatment for ear plaques. My vet prefers a hands-off approach and we have opted for the compromise of unbuckling the bridle/halter rather than battling over it

When I acquired him, he was barefoot. We put shoes on the front because we wanted to trail ride. After a couple instances of hind hoof abscesses, I opted to put shoes on behind as well. Not a single abscess since the shoes went on, so they have stayed on.

Chance has no vices…no cribbing, chewing, weaving or anything obnoxious. He respects hot-fence. He is submissive (bottom of the pecking order here) so doesn’t stir up trouble with other horses. He trailers well, rides well on the trail with other horses, etc. He is a relatively easy keeper for a TB, he eats 2 flakes timothy 2x day plus about 5# of Strategy. He is a tiny bit chunky right now due to less work. When he is being ridden regularly, this amount of food keeps him at a nice weight. He does not do well on grass hay, gives him the runs. I haven’t tried him on alfalfa.

He is easy to catch and tack up (with the bridle taken apart as described). He stands for the farrier, and the vet. He is UTD on all vaccines and currently does not need floated. He is shod every 8 weeks. He does not bite, although if you scratch him he will offer to “groom” you as though you are another horse. It is humorous, but can cause alarm to someone who doesn’t understand.

Chance is too young to be retired and deserves better than standing around in a paddock. He will be a great horse for someone who doesn’t mind working through his baggage and getting to know the kind, sweet, gentle soul that he is.

We have photos of Chance taken way back in 2005 when he first became a SAFE horse, and more photos of him taken over the years since then. 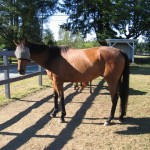 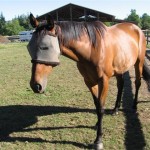 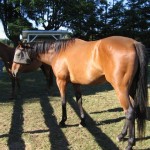 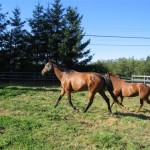 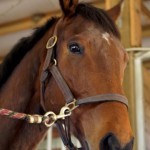 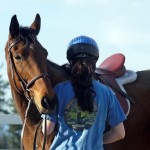 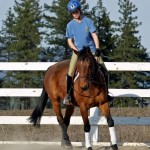 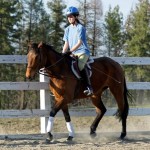 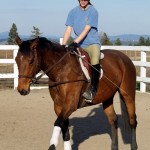 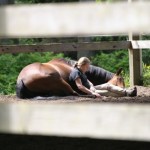 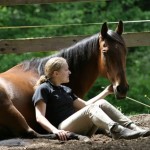 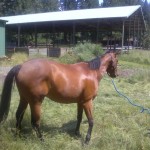 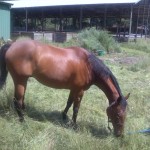 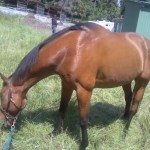