Sunny & Shasta, along with SAFE Board members Victoria and Sharman, made an appearance at Woodinville’s 35th Annual Parade & Basset Bash last weekend.

Shasta was totally in her element and when she figured out that Victoria was trying to guide her to the side to talk up SAFE and let the little kids, seniors, and people who had never pet a horse before, she starting taking her towards groups of people. She was a Rock Star and somehow picked up several strings of Mardi Gras beads along the way. (Victoria did not ask what she had to do to get them!) Sunny was a little less enthusiastic but still a good sport. The two horses got to visit with a few King County Sheriff Officers on bicycles and took the opportunity to thank the officers for getting them out of a bad situation (back when King County Animal Control rescued Shasta & Sunny from starvation. Neither of the horses had a problem when they encountered a gymnastics school flatbed sporting a crew of gymnasts turning flips 20 feet in the air. They were also completely unfazed by hoards of Bassett Hounds participating in the event. The ponies and their handlers gave out purple candy and made lots of new friends. They both looked spectacular after the grooming they received from the team of little girls from Charlottewood Stables in Woodinville prior to the parade! 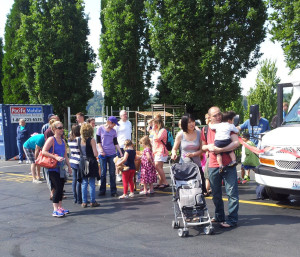 Somewhere in there is Sunny D

We’d like to thank Lori and Janet of Charlottewood Stables for arranging trailering and to Centerline for letting the SAFE ponies walk with them at the parade.