A Big Day for Owen

Today was full of new experiences for our man Owen. As you know, Owen is a stallion, and it has always been our intention to change him into a happy gelding, as we do with all intact male horses that end up in our rescue program. When we agreed to take Owen in, we were unaware that he was not only not halter broken, he was untouchable, and so gelding him immediately was not possible. Fortunately Owen is a very mild mannered fellow who doesn’t act studdy, and may or may not even be aware what those rather large things hanging between his legs are for. And living with a gang of geldings without a mare in sight, his behavior has remained pretty manageable. So we’ve been able to take our time and work out a plan for his future gelding.

Since he came to us without medical records or a vaccination history, we were advised that the best and safest way to proceed would be to give Owen a tetanus shot, and then follow up in a month with a tetanus booster. His gelding procedure could take place on the same day as the booster shot.

So today Dr Hills of Sound Equine came out to the farm to see Owen for the first time and, hopefully, administer his first tetanus shot. When he arrived, I had Owen waiting,  standing calmly in his stall. To get an initial dose of sedation into him, Dr Hills loaded up a pair of special syringes with an IM sedative, placed one of the syringes (which had a feathered end just like a dart) into a hollow tube, pointed the end of the tube at Owen’s hind end, and from a distance of about 3 feet away, he blew into the end of the tube and shot the syringe/dart right into Owen’s bum! It happened so fast that Owen barely had any reaction at all, and I could not help but laugh at the sight of him standing there with a surprised look on his face and a dart sticking from his butt. 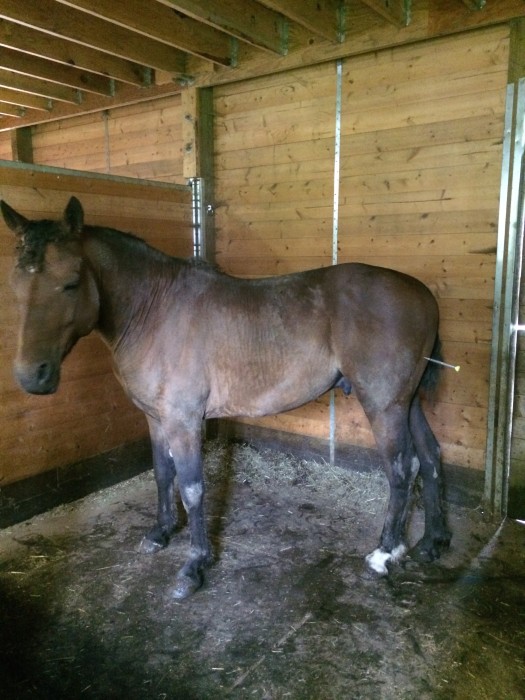 After a second dart in the butt, it was time to wait for the sedative to take effect. After sufficient time had passed, Dr Hills entered the stall and carefully looped a lead rope around Owen’s neck. He then was able to put a leather halter on him, and administer his tetanus shot. Owen was doing so well that we decided to proceed with giving him a dental exam, and then he was even able to have his first dental float! Dr Hills reported that Owen’s teeth were in decent shape with just a few sharp points that were causing ulceration in his mouth. Owen remained in a drugged stupor that allowed Dr Hills to take care of those sharp points with a power float, the first of many that Owen will have over the course of his lifetime as a tame and well-cared-for horse. 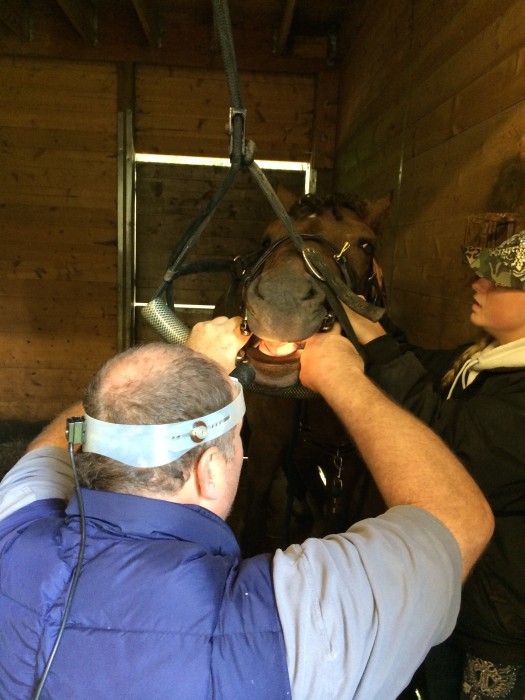 Owen is scheduled to be gelded on Tuesday June 3rd. In the meantime, he’s now wearing a halter which will hopefully help with the process of gentling him. He’s still very curious and interested, but any attempts to touch him result in him moving away. Gaining his trust has been a slow process and he’s done very well, but he has a long way to go!