A Lesson From Luke 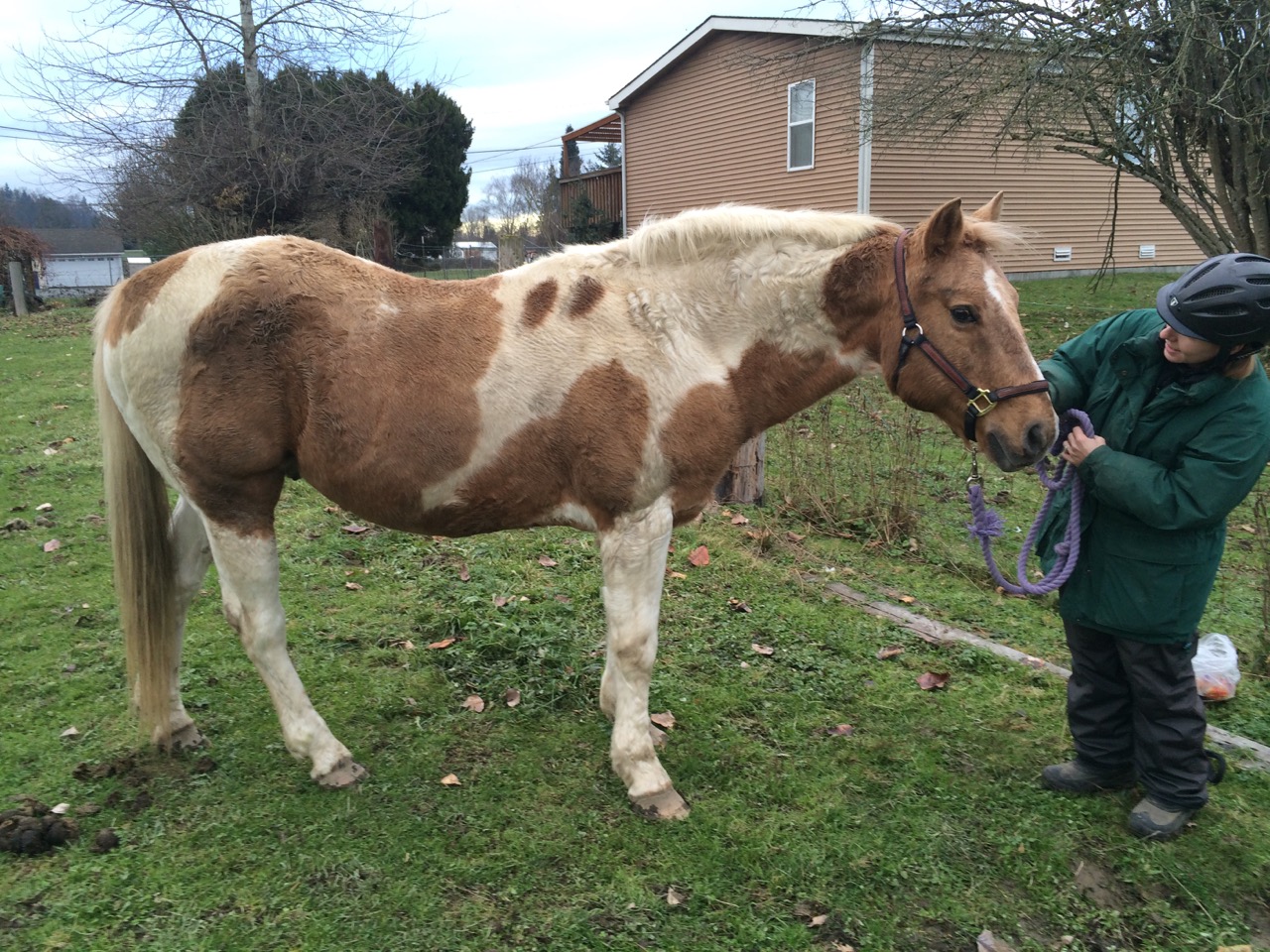 Luke was an old draft cross gelding, living alone in a field in Snohomish. I say he was living alone because he really was: his owner had gone into assisted living, and there was no one left to care for him. The remaining members of his owner’s family lived about three hours away, and they knew nothing about horses. So they called SAFE and we drove out to meet Luke. He was a sad old guy with no front teeth and a very poor quality of life, so we made the necessary arrangements to help him pass with dignity.

This is not the first time we’ve dealt with a situation like this. In fact, SAFE has taken in several horses over the years who unexpectedly found themselves without owners. But Luke was the one who got me thinking about what would happen to my horses if I were to suddenly pass away.

My parents had been after me for years to make a will. Logically I knew that if I were to die without a will, there would be problems. But I never seemed to find the time or the motivation in between all my other problems to do anything about it. Truthfully, I preferred not to even think about it.

I am the lucky owner of two horses. One is a 29 year old Thoroughbred named Jay; the other, a 13 year old Curly Horse named Owen. I had always said that I wouldn’t want Jay to be sold or given away if I were to die, because although he is handsome and full of personality, he doesn’t really have any value to anyone but me. I’ve seen too many horses in bad situations, and I couldn’t bear to think of anything happening to him. So if something were to happen to me, I reasoned, I would want Jay to be humanely euthanized.

Trouble is, how on earth would anyone know this if I wasn’t there to tell them?

If Owen wasn’t mine, I would want my close friend Jenny to have him. She’s known him as long as I have, and she loves him dearly. She’s a great horseman and a great rider, and I know the two of them would get on well together. Also, I trust her decision making skills and I know that Owen would be well taken care of for the rest of his life.

Trouble is, Jenny can’t afford a second horse! How could I expect her to suddenly start paying for Owen’s care for the rest of his life?

So that was my situation, and those were my troubles.

But then I met Luke, and something about this poor old fella made me realize that I had to take action. I couldn’t bear the thought of the same thing happening to Jay and Owen. So I put on my big girl pants and set off to create a pet trust for them.

Spoiler Alert: Creating a pet trust was not as difficult, frightening, or expensive as I’d thought it would be! I did it in just 5 easy steps!

Disclaimer: This article is not meant to provide financial or legal advice to anyone. I am just explaining the process that I went through to create my pet trust. You will need to seek out the advice of trusted professionals to work through your own situation!

Step One: Advice and How to Get It

I made an appointment to talk to a financial advisor I know, someone who works for the firm that manages the IRA I built when I was self-employed. I explained to Adam* that I wanted to leave Owen to my friend, along with enough money to pay his expenses. Adam told me I needed to set up a pet trust, a legal arrangement that would tell people what I wanted done with my pets were I to die suddenly. I could fund my pet trust by purchasing a life insurance policy.

Adam told me that I could probably get a life insurance policy that would pay out $500,000 for a monthly premium of around $100. That seemed so reasonable that I decided I would thank Jenny for taking my horse with an additional stipend of $500 per month, to be used at her discretion. That brought my total up to $285,000…still well below the payout of the life insurance policy. I decided to leave the remainder to a rescue organization near and dear to my heart (i.e., SAFE) so they could continue doing good things for horses after I was gone. How cool is that?

I had expected it to be morbid and sad to contemplate my own death, but actually, handing out all this money was kind of fun!

This was something that Adam could also help me with. It took very little time to draw up the paperwork for my application and start things in motion.

The premium for my new life insurance policy — $110 per month — was based on the fact that I was a 54 year old woman. To get approved for a policy, I would have to allow them access to my medical records and I would have to have a medical exam. The exam would be done by a nurse in my own home, which seemed pretty easy. An appointment was set.

The nurse arrived at my house with a small carrying case the size of a toolbox. We sat down at my table and she asked me some questions. She measured my blood pressure, height, and weight, and I had to pee in a cup. That was it. The whole thing took less than 30 minutes.

I belong to a credit union and for years they’ve been sending me offers to join their Group Term Life Insurance program. Mostly I’ve just thrown these in the recycling, but recently I did open one up and look it over. I discovered that I could get a $75,000 policy for just $21.31 per month. Were I under 24, I could get the same policy for just $3.38 a month! And there was no medical exam required. The point I am trying to make here is that there are opportunities all over the place to obtain inexpensive life insurance, and this could make a world of difference for the pets you might leave behind.

Step Three: Draw Up a Will

Before I go into detail here, I’d like to point out that it cost me just $400 for all of the services provided by the lawyer I used.

The lawyer who drew up my paperwork was recommended to me by Adam the financial planner. I set up an appointment and met with her in her office. For the pet trust, I had to figure out who would be called upon to care for my horses if I were to pass away. First I had to name their Custodians, that is, the people who would become their new owners. Then I had to name someone to act as the Trustee for my trust. The Trustee would manage the money in the trust, and take responsibility for paying my horses’ expenses out of the trust. Finally, I had to name a Trust Protector, to whom the Trustee would report to on an annual basis to ensure that the funds were not being misused.

The directives for my pet trust are part of my Last Will and Testament, so I now have a legal document that says who I want to leave my possessions to. At the same time, my lawyer drew up a Health Care Directive for me, which is essentially a Living Will, and a Durable Power of Attorney. So it’s not just my horses who are protected, I’ve also protected myself, and I’ve taken steps to make things easier on my family if I were to pass away suddenly.

It didn’t take too long before I needed to make changes to my will. Specifically, I moved Jay to a retirement farm where he is adored. I want him to remain there so I asked the owner if she would be Jay’s custodian if I passed away. She was more than willing to accept that responsibility, and so I changed my will to name her as Jay’s custodian. To do this, I had to tell my lawyer what I wanted changed on my Last Will and Testament, and then return to her office to resign the document. I was billed an additional $100 for this service.

Step Four: Name the Beneficiary of your Life Insurance Policy

You do need to make sure that your life insurance policy will pay into your trust. This is usually just a matter of filling out paperwork that your financial advisor supplies.

The custodians of your animals will surely appreciate any information you can share about your pets while you’re still among the living. So it’s a good idea to write it all down! Create a document that outlines specific care instructions, vet history, likes & dislikes, and whatever else you would want known about your pet. Be sure to keep the information updated by periodically revisiting your document.

And that is how I created my pet trust for Jay and Owen. Your experience will likely be different, but the point I wanted to make was this this was not scary, not difficult, and not expensive. If I can do it, you can totally do it.

I feel far more secure knowing that my horses will not end up adrift in this world with no one to look out for them if something happens to me. So thank you, Luke, for motivating me to make these relatively simple changes. I will think of you fondly for a long time.