A Long Overdue Update for Bucky B Lucky… 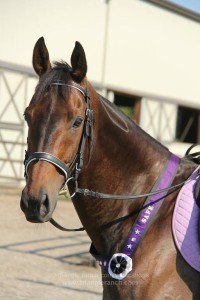 Lucky has been on medical hold for a while now, while we worked to sort through a couple of issues. We now have more information to share regarding this handsome gentleman.

First and foremost, Lucky’s behavior has been fabulous during his time in foster at White Birch Farm. Melonie reports that he is a joy to work with. In fact, he caught the eye of one of Melonie’s clients who applied to adopt him.

During the course of the Pre-Purchase Exam, Lucky flexed and moved sound on all four legs. It looked like he was headed for a forever home. But we were all shocked when an X‑Ray of the fetlock joint (where surgery was performed in 2011 to remove bone chips) revealed a new chip. It is impossible to say if this is a new chip from the fetlock joint, or if it is a calcification that formed due to the prior injury/surgery. Either way, there is currently a chip present in the fetlock joint. We consulted with Dr. Bryant, who did the initial surgery, regarding prognosis and treatment. He indicated that since he was moving sound, it was fine to continue Lucky in light work (W/T/C). Continued light work will help him stay sound as long as possible. If at some point in the future, the joint becomes symptomatic his working-life may be extended by surgery to remove the chip.

A separate question was raised at the Pre-Purchase Exam regarding the cloudiness in Lucky’s eyes. Although this cloudiness has been present since Lucky’s intake and has not gotten worse, the examining veterinarian was concerned that it might indicate he was at increased risk for possible future loss of vision. Based on these two issues, the potential adopter decided not to move forward with the adoption, and Lucky was placed on medical hold to give us time to investigate further. 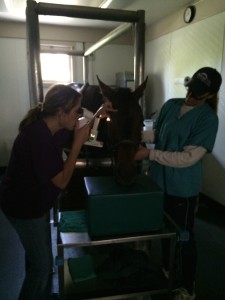 A few weeks ago, Lucky underwent a thorough eye examination, performed by an Equine Ophthalmologist, Dr. Victoria Jones of Northwest Animal Eye Specialists. Dr. Jones’ report brought good news for Lucky’s current and future vision status. The exam and diagnostics confirmed that Lucky’s cloudiness is scar tissue from two separate previous injuries. It is not currently affecting his vision, and there is no reason to think that he’s at increased risk for future vision loss. This was a huge relief!

Lucky has been removed from medical hold and is once again available for adoption. Currently, he continues to be worked lightly and is moving sound. He does exhibit some occasional stiffness behind, and a generous donor has offered to fund a trial of Pentosan injections.

Lucky has been discarded by his owners twice in his short life. But since his return to SAFE, he has proven himself to be a solid citizen who is happy to work for a living. He put in a very solid performance at the 2014 SAFE show, where his behavior was exemplary and he earned ribbons in halter, under saddle, and dressage classes. Everyone who works with Lucky has nothing but glowing things to say about his behavior and his work ethic, not to mention his stunning good looks! He deserves a loyal adopter of his own, and a forever home. His ideal adopter is a confident rider who is willing to keep him in steady work and training, and monitor his comfort and soundness as time goes on. Are you ready to get Lucky?