A Visit with Phoenix

Phoenix continues to improve every day, and is becoming a bright, curious and loving foal who thankfully now only seems to be lying down when he takes a snooze. He is maintaining a normal body temperature now too. He loves attention…he nickers when he sees you coming towards his stall and he enjoys the praise and petting he gets as he sticks his little head over the door. When you see this little guy, and look into his big eyes, you cannot help but breathe a sigh of relief that he is recovering, because had he not, there would have been a long string of broken hearts left behind. He is that special. Everyone loves him.

He is a good boy who submits to his three-times-a-day administration of yucky medicine as best he can. He enjoys a half hour a day of grazing with his two friends, Sinatra and Kokomo, and while he’d be happy to stay out a little longer, he is easy to catch and lead back into his stall. In his mane and his fluffy white fur are bits of fresh shavings from his deeply bedded stall; Jaime and her faithful volunteers keep his stall immaculate and comfortable at all times. He is fed small piles of hay continuously over the course of the day. He wears two blankets to keep him warm. Rest assured that Phoenix could not be cared for any more carefully, lovingly and diligently that he is being cared for now. 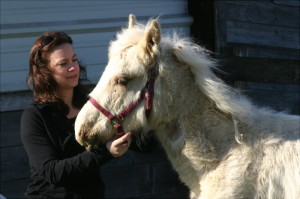 Looking at him, it is unfathomable that anyone could have neglected a foal to the extent he was neglect. Human beings, like most mammals, are wired to nurture and protect babies when we are faced with them…and yet somehow…he ended up on the brink of death due to the inaction of the person responsible for bringing him into the world…we ALL need to work together to make sure that things like this stop happening. Now.

An enormous thank you goes out to REDMOND!, who is there every morning at 8am to clean the stalls and paddocks of these mares & foals. Her help has been invaluable and crucial during this time. Which should come as no surprise to any of us.…she is always the one who can be counted on to jump in and help whenever help is needed. So take a moment to say thank you to her…hey, send her a PM…she loves PMs! ;D

And what can I say about Jaime that would make you all understand what she is going through to help these poor horses recover? Three times a day she grinds pills, mixes up syringes, and patiently goes out to gently catch each one of the foals, and squirt the yucky mixture down their squirming little throats. That is tricky enough for the three foals that are in stalls, but little Lily who lives in the small pasture with her mother, has medicine to be administered twice a day, and she isn’t so eager to be caught either. Jaime kneels down and coaxes her over to her with a soothing voice and a handful of hay, and when Lily gets close enough.…no, she doesn’t reach out and grab her!…she gently snaps the leadrope onto her halter and Lily never even seems to notice she’s been caught. A quick squirt of medicine and the little girl is free again. And Jaime does this even when she’s in a hurry. She may be running full tilt to get everything done, but the horses would never know it. She’s patient, gentle and encouraging with each and every one of them. And they adore her.

She also administers eye ointment to Kokomo three times a day (which is not easy to do to any horse, least of all a squirmy baby. Because of Hope’s diarrhea, Jaime mixes up four syringes of Miracle Clay…twice a day…and feeds that to Hope…let’s just say that her parka she wears out to the barn looks as if she’s been mud wrestling in it…it’s a messy messy job! But again, there is no impatience, no frustration, just calm encouragement for the poor mare who has to swallow all this stuff, and hearty congratulations and praise for her when she’s done.

On top of all of this, there are multiple small feedings per day. There is dusting for lice and rainrot treatment to be done. This week they will start carefully worming the horses, and that will mean constant vigilance for signs of colic. Work starts this week on the horse’s badly overgrown feet, so she will be there holding them for the farrier, trying to keep these relatively unhandled horses still while the farrier works. The there are her own horses, who are regulated to a safe corner of her property while the new ones are in quarantine, but still need to be fed, watered and cleaned up after. The looks they give her — when she is unable to even touch them for fear of infecting them — make her feel terribly guilty. And when all the outdoor work is done, she comes inside to face a full email inbox, a phone that never stops ringing, and, oh yeah, a son and boyfriend who want and need her time as well. It is no wonder she is exhausted. But she does it all with as much cheer as she can muster. She’s truly amazing.