For SAFE horse Maggie, the road to her forever home has been a long one.

This mustang pony mare was gathered out of a Nevada BLM roundup in 1995, so by our estimation she’s about 22 years old. We know very little about her life before coming to SAFE but there’s pretty clear evidence that she was not always treated well. She was seized by animal control due to neglect, but we’ve seen signs of physical abuse as well, possibly at the hands of a farrier. Maggie was initially adopted to a young girl who rode her over fences, but sadly the adoption did not work out. When Maggie returned to SAFE, she was very scared and nervous around people she didn’t know. Terry began slow but consistent horsemanship training with her, and was able to restore her trust and confidence. Along the way, the two formed a close bond. “I have to be honest,” Terry remarks, “I love this horse very much. I tried to describe it to someone and all I could think of was to call her my heart horse because of the bond I have with her. I don’t know if it is just her story, the heartbreak of being returned to SAFE or the trust she has given to me but it is something that I can’t adequately put into words. I have thought about adopting her myself so I can watch over and be part of her herd for the rest of her life. The only thing that stopped me is knowing that I would not be able to give her the time she deserves since I am so busy here at SAFE.”

After giving much thought to a perfect situation for Maggie, Terry had an idea and reached out to Sandy and Tim Matts at Raven Rock Ranch. Located in Woodinville, Raven Rock Ranch is a nonprofit equine assisted therapy center that pairs formerly neglected horses with at-risk youth. At Raven Rock, the instructors, volunteers, and the horses work together to transform the kids in ways that are both physical and mental. Suspecting that Maggie would make a wonderful therapy horse, Terry invited the Matts over to meet her. Raven Rock had recently lost one of their most beloved mares, and there was a hole there that Maggie might be able to fill. Sandy Matts immediately saw the potential for healing that Terry saw in Maggie. They decided to take Maggie on trial. Not longer after, Sandy wrote to us, saying “I was particularly touched by her willingness to trust when she has been betrayed so many times. I think horses represent forgiveness more than any other animal.” When she let us know they would like to move forward to adopting her, we were all delighted and comforted knowing that the best home had been found for Maggie.

Sandy emailed us last week: “She has acclimated very well. She comes alive when she is with children — so sweet! She really trusts them and is only cautious when she is meeting a new adult. I have ridden her twice on the trail. She is not accustomed to these trails enough for me to allow a child to take her out there, but she is wonderful in the arena or round pen. I will just continue taking her out so that she has plenty of time to get used to the new area.

“We have fully committed ourselves to her. Raven Rock is her forever home. Ruby (Maggie’s new name) is so kind and patient with our children and has settled in well with her herd mate, Ruthie, our new Fjord. They are very well bonded. Ruby is the leader (I bet you knew that). I will send updates, and anyone can come visit whenever they need a hug.”

We all wish Ruby, aka Maggie, the happiest of lives and joy in her work with the kids. Her life is complete with a family and community to love and honor her for many years to come. SAFE looks forward to hearing how she is doing, going to visit and get much needed pony hugs! 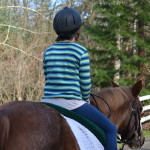 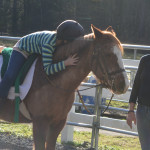 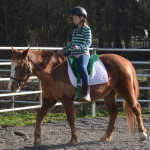 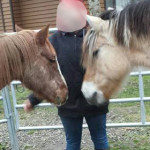 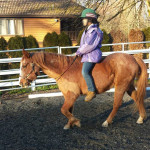 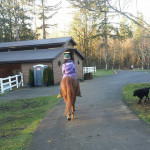