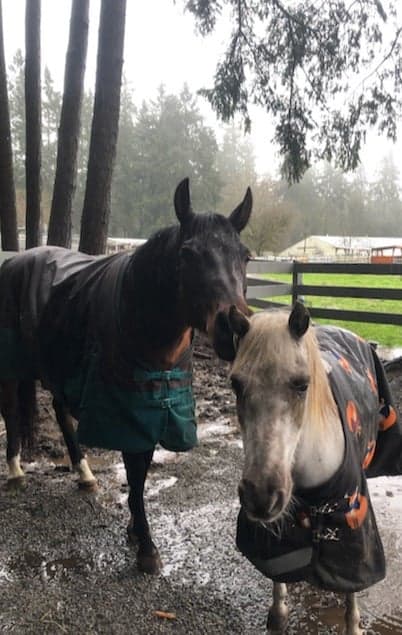 We meet Janelle a few weeks ago when she came to us, looking for a riding horse to join their family. She met Cameo, and It quickly became clear that Cameo and Janelle were perfect for each other. But since Janelle didn’t own any other horses, we were reluctant to adopt her all alone. Cameo loves having friends around, so being alone on a property would not make her happy. Because Janelle wanted to make a perfect home for Cameo, she was open to the idea of adopting a second horse to keep her company, and decided to consider Mara as a companion and friend. But would this mismatched duo live together in peace and harmony? We

We decided to see if Cameo and Mara would get along by turning them out in adjacent paddocks. We then introduced them to each other while in hand, and finally let them out in a big grass area so they could get to know each other while grazing. And to our somewhat astonished and VERY happy surprise, this unlikely pair became buddies! Who could resist Mara’s pint size cuteness and sweet whinnies? Cameo fell in love, and happily accepted her little friend with some nuzzles and chin scratches on her back. Oh, did you not know? It turns out that Shetlands are exactly the right height to get that hard-to-reach itch on the chin… just ask Cameo.

Janelle reports the dynamic duo are getting along well and settling into their new routine at home. We are so thrilled they are safe and happy in their home. They will have a wonderful life and we look forward to many happy updates along the way! 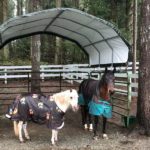 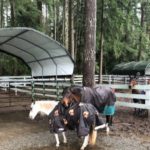 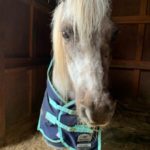 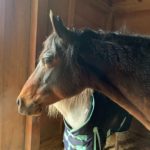 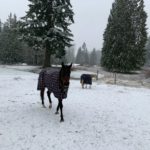