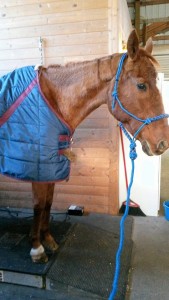 Anakin on the Theraplate

Our boy continues to fight the good fight at Cedarbrook Vet Hospital where he is being cared for round-the-clock. His feed has been increased so that he now has soaked hay in front of him nearly 24 hours a day, which makes him VERY happy! He does have some swelling in his legs and abdomen that has us a bit worried…blood tests done last week show a decrease in his protein levels since his arrival…which could mean that he’s not absorbing nutrients as well as we’d like to see. His diet and supplements have been adjusted to try to improve those levels.

Since he’s stall-bound, his inactivity is not helping the edema. So Anakin’s legs are being cold hosed, polticed, and wrapped twice a day to try to bring down the swelling. Another therapy he is receiving is daily Theraplate sessions. Theraplate provides zero impact whole body vibrations via a large plate that the horse stands upon. In Anakin’s case, we are using this therapy to increase his circulation and reduce his swelling. But there’s another neat side effect of this therapy for Anakin: it actually seems to remind him of the time he spent as a research horse at Cal Poly. So it brightens his spirits and gives him something meaningful to do, which is just the sweetest thing.

So many people have donated to Anakin’s care, and we want you all to know that it is making a difference!