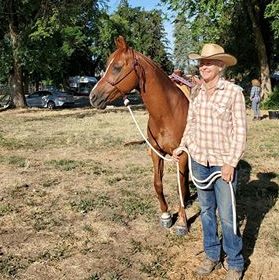 By Phoebe T.:
At the start of the Buck Brannaman clinic in Ellensburg, Anderson behaved like a typical horse in new surroundings but that didn’t last long. He exhibited a calm demeanor (for an Arab), and remained attentive, interested, and responsive throughout the 3 days. Of course, that first day, Anderson, who has been flagged a thousand times by now, decided to get nervous when the flag rapped the saddle so I had to break his hind over about four times before he came back to me. But after that, he was awesome! He became very responsive to both the flag and to my feel. He was a delight to sponsor! This was a great experience for both of us.