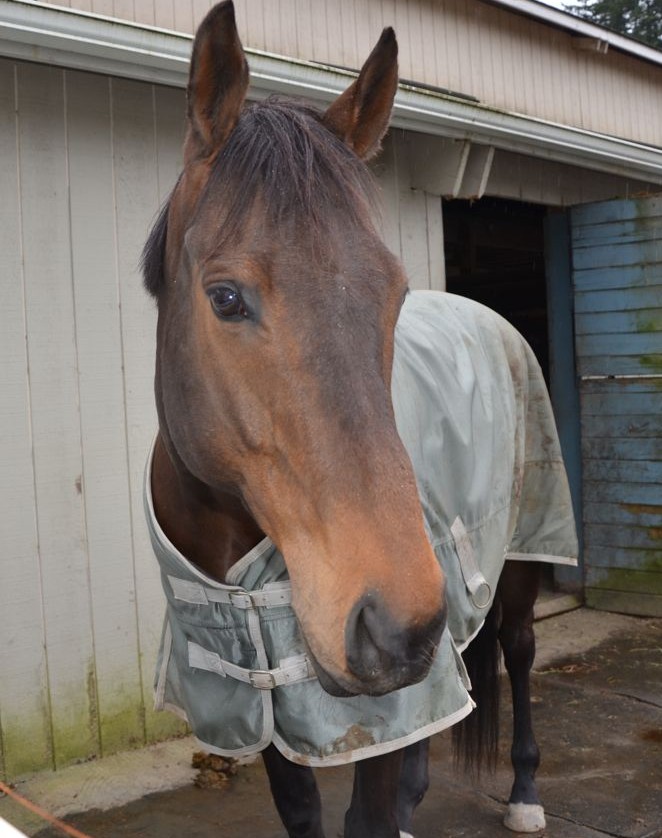 Bucky B Lucky was returned to SAFE nearly two months ago. His previous adopter had many ups and downs with him, but in the end, returned him to us citing behavioral problems including rearing under saddle and striking on the ground. From the information we were able to gather about his time as an adopted horse, it seemed that for the most part, he was well behaved while in steady training and work, and problematic when allowed too much free time and not enough discipline. These observations have held up with the behaviors we’ve seen from him since he arrived at SAFE Harbor. When he’s good, he’s very good, but he’s bad, he can be pretty naughty.

Lucky has some very bad habits that he likes to pull on the ground. He bit our trainer, Brittney, when she turned her back on him in his stall, and he’s shown a real talent for cow kicking in the cross ties on more than one occasion. He’s been quickly and strongly reprimanded for these behaviors, but the last time he tried to cow kick Brittney he let out a little TB squeal as he did it, like he was playing gelding games with another horse. Again, it was quickly made very clear to him that that was NOT acceptable, but we all know that he’s going to continue to test and challenge the people who handle him because that is what some young, lively Thoroughbreds do. Lesson learned: don’t turn your back on him, and don’t let your guard down around him.

Under saddle, Lucky has quite a bit of talent, and has the potential to be successful in the dressage arena. But he’s not an easy ride, especially if his rider wants to correct him or adjust his preferred way of going. For example, Brittney rode him today and at the beginning of the ride, he was moving crookedly with his haunches to right, popping his right shoulder and trying to root at the reins. When Brittney made a few tweaks to get him into a straighter frame, he threw a big fuss about it. She stood up to him and told him no a few times, and then he relented…ending his temper tantrum and allowing her to readjust him little by little until he was moving straighter and using his body more correctly. By the end of the ride, he was swinging out and starting to lift his back. Brittney ended up with better movement from him than she was expecting, and they ended the ride with Lucky moving like a lovely, enjoyable dressage horse.

Brittney is an experienced rider, and she’s known many dressage horses who require a “discussion” before submitting to their rider’s direction and giving their best under saddle. Sometimes this means a sweaty, exhausting ride or lesson, but in the end, horses learn what they can and can’t get away with. Lucky’s ride today was a challenge but Brittney will ride him three more times this week and she predicts that things will be better each time. The mistake would be letting him get away with bad behavior. She feels pretty certain that if she did, he’d be back to trying to rear in no time. He’s a horse that needs a strong and confident rider, someone who can make things very clear to him and set him up for success under saddle.

We’ll be making a decision soon about offering Lucky up for adoption, and we’ll likely be looking for an experienced rider who is willing and able to keep this horse in training and keep him on the straight and narrow. For the right person, Bucky B Lucky will make a great mount and a great friend. He’s a Thoroughbred, after all, with the heart of a champion and the body of an athlete. He’s also a lot of horse!

We’ve gotten the word today that Emerald Downs, where Bucky B Lucky raced, wants to feature him in an upcoming segment called “Where are they now?” If you’re not already familiar with Lucky’s story, there is a very moving account of his rescue from the auction Kill Pen written by Jeannette Parrett called Super (Horse) Saver. He was also the subject of an article in the Seattle Times called Rescue Groups Save Racehorses from Slaughterhouses and a KCTS-TV9 feature called “Stable to Table.”