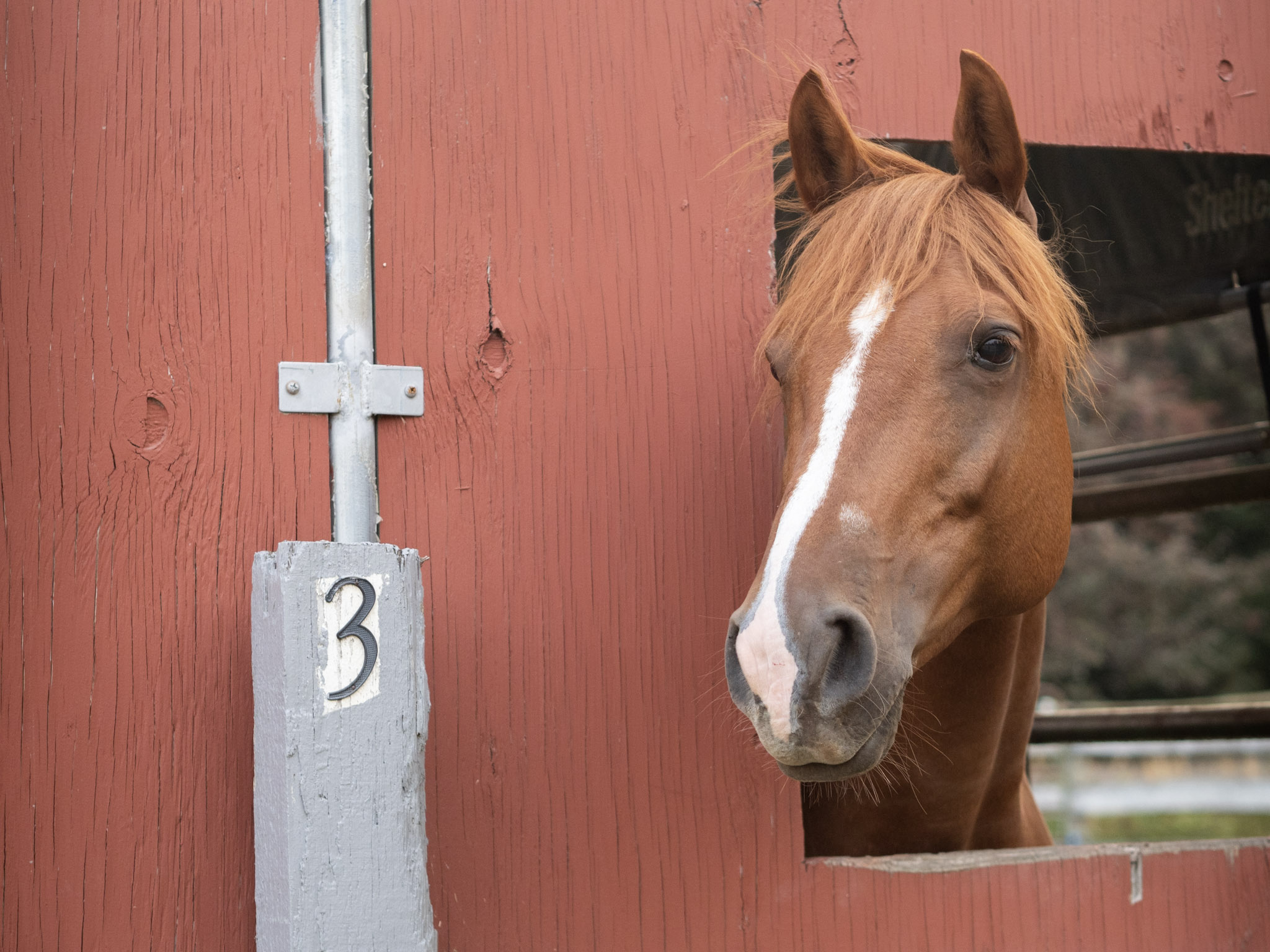 There should come a time in every young horse’s life when the proverbial cord is cut, and access to their mother’s milk is stopped. It’s not as harsh as it sounds: after around 4 months, a foal needs more than just milk to meet its nutritional needs, and as long as they are eating hay and grain, milk just becomes that extra, unneeded slice of cake at the end of their meal: a nice treat, but no longer essential.

In order to wean a horse successfully, they must be separated from their mother (foals, much like human babies, are not easily reasoned with).

You may be thinking, that’s all well and good, but what does Teddi have to do with all that? Well, back when Minnie was weaned at the beginning of the year, it was decided that her first paddock-mate after Checkers, her mom, would be Teddi. And for good reason. A mother in her own right, Teddi’s resume includes years of first-hoof experience bringing up babies, and a patient (but no-nonsense) attitude that is well-suited for teaching young horses good manners. In short, she was the perfect choice for a transitional friend between mom and the big wide world of horses.

In the months she has spent with Minnie, Teddi has proven to be a perfect choice as an “auntie.” The two spent a lovely summer getting daily grass turnout together, and though Minnie’s youthful energy inspired a few romps, any extra running didn’t seem to be to Teddi’s detriment, for now, at the end of the season, Teddi is still quite sound (if you recall, Teddi’s ringbone makes it so that even moderate exercise can exacerbate her condition). Though she still demands to be first to eat (and is not shy to chase Minnie away from the first hay bag filled at feeding times), she is a fair and benevolent presence, and it is not uncommon to see the two munching happily side-by-side after the initial pecking order is established. When they recently moved paddocks, Teddi led the exploration of the new space with Minnie close in tow, and when Teddi decided it was time to christen the ground with a roll, Minnie immediately followed suit. When the weather is poor, the two huddle together beneath the shelter logic, with Minnie oftentimes tucked snugly beside her chestnut friend.

Because of how well Teddi has done with Minnie, it has been decided that she will also be Coco’s “auntie” once Coco is weaned. In preparation, Teddi and Minnie have moved to a paddock adjoining Sundae and Coco so that introductions can be made and the group can get used to living together. So far, things have been going swimmingly. Coco, curious as ever, was a fast friend to her new neighbors — one of whom is just her size! — and Teddi has expressed reciprocal curiosity towards who is soon to become her newest charge. Who knows, by next year, you may hear of Teddi opening up her own daycare. One thing is for sure, we are very grateful for our wise and maternal chestnut mare! 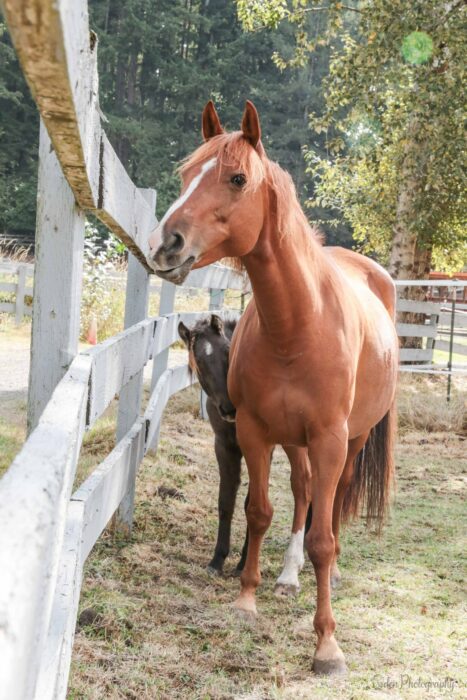 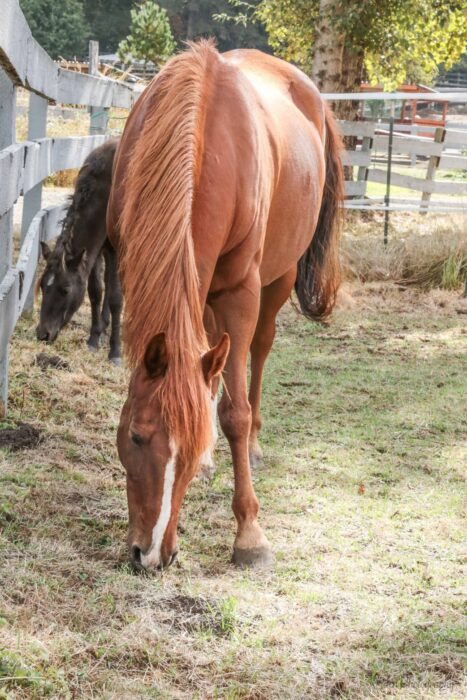 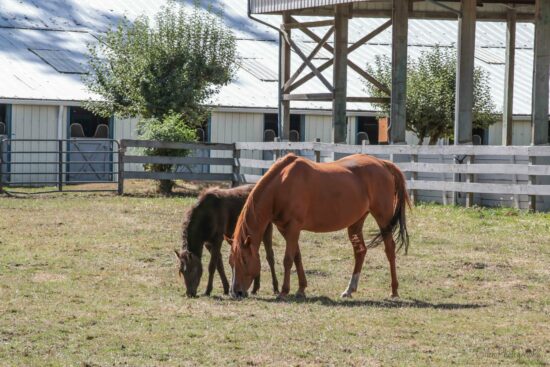 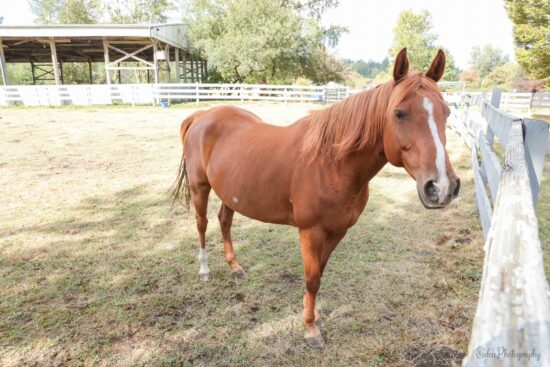 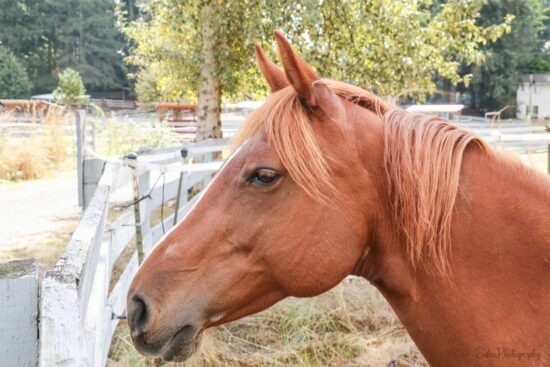