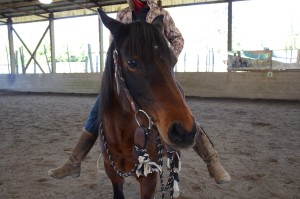 Cameo has improved so much over the past several months. She’s become very steady under saddle and seems so much more mature. She is lovely to handle and work with now that she has lost that flighty edge. She has really settled into the ground work and being ridden on a loose rein. She is walk, trotting and cantering with a more relaxed manner. I think this is a combination of all the wonderful groundwork attention and patience that Laura McCorkle has given her, as well as the balance she is feeling with Jake Cowden’s shoes. The shoes are still a work in progress but we are already seeing such positive results. Her extra muscling on the one shoulder is almost completely gone and we no longer have to pad the one side of the saddle to compensate. She feel a lot more balanced underneath you when you ride and she doesn’t feel as much like a motorcycle leaning side to side as you trot and canter.

Cameo and Laura also participated in both days of the Michael Sparling Clinic at Safe Harbor Stables. Here is what Laura had to say about the clinic and Cameo: “I really enjoyed this clinic – more than the last one (though they were both great). As I have found with other clinics, learning a specific clinician’s techniques helps me understand my own way of working, and adds stuff to my “toolkit”. That shift in perspective is really valuable.

For me, one of the most valuable things in Michael’s approach is the idea that we should always be offering the horse something – not just leadership (though that is critical); not just instruction/training, but something the horse gets to tell US about. I like that Michael emphasizes the importance of looking for what the individual horse WANTS from us in terms of connection – maybe it’s a face rub, maybe it’s a withers massage, maybe it’s just standing still next to us, or letting them move out in a certain way. I think sometimes ANY method of training can be too much concentrated on what we can DO with the horse, but if we take time to connect and OFFER them something, the horse is more motivated to work for us and happier about doing it. And it’s way more fun for us, too!

I also like how this specific style of work connects the hind end with the front end very fluidly. At the last clinic, in the riding portion we were asked to do the “Short Serpentine” (walking in a shape kind of like ribbon candy), and I was very frustrated with trying to do that with Cameo….it was extremely difficult for us both, and I felt that she was not balanced enough or ready for it – but in clinics I always try to do things as the clinician says, so we kept with it. I feel like I’m not really learning anything if I go in there and do things “my way” the whole time! Anyway…I appreciated the exercise and the ideas behind it, so in the months after that first clinic I worked the Short Serpentine with several different clients’ horses including my own and had some great successes with it…but still not with Cameo.

In this clinic, he had us do serpentines again, and I started out as I had in the first clinic, thinking that’s what he was asking for. Cameo was a bit better, but we were still struggling a lot (her balance is better than it was but she still has a long way to go, especially with a tall rider like me!). Then he told me to try a much more shallow version where we looked for just one good step over – a smaller starting point to reach for. That worked much better, and was kind of what I had been wanting to do anyway – it felt great to have the validation that my instincts had been correct and when we switched to that approach this time it worked SO much better!!!! I hope that by the next clinic, Cameo and I will be rocking the Short Serpentines and she’ll be balanced and bending like a snake

I also liked what he said about looking for relaxation as a primary goal…getting the “correct response” in the body is nice, but it’s important to get it in a way that indicates the horse is relaxed and feeling good about it. It might not always start out that way, of course. Especially with horses with a rough history, you have some issues and braces to work through, but in the end it’s not enough for them to be “technically” correct in their bodies – you have to get right with their MINDS. But that’s what has always drawn me to this approach to horsemanship – a horse’s body is beautiful and capable of incredible things, but their minds and spirits are even more amazing. THAT’s what I truly love to work with and communicate with. Especially with Cameo.” 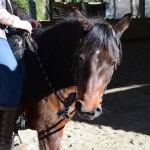 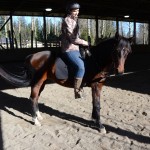 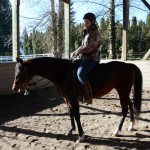