Einstein is a 15 year old Quarter Horse gelding seized by Animal Control for lack of care. He’s already gained about 50 pounds since he was taken from his home, and he’s starting to shed his scruffy starvation coat. His hooves are going to need a lot more care as they were very flared with underrun heels when he came in. The condition of his hooves seem to be having an effect on his movement, he seems pretty stiff and possibly footsore, which hopefully will improve in him. Einstein is a nice boy, very polite, a little unsure about the big changes that have taken place in his life, but he is starting to get a little more confident and friendly. He also has a lot of energy, which is to be expected with good food in his belly. We’re told that he is a riding horse but it will be a while before we can confirm that for ourselves. More to come! 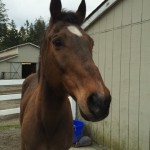 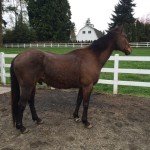 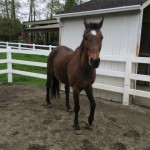 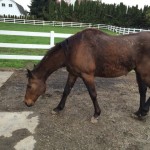