Emmy was seen by Dr McCracken at Rainland Equine last week for continuing diagnostics, following the discovery of the OCD lesion in her stifle. The results of these diagnostics were informative but not completely conclusive.

Dr McCracken used Rainland’s “Lameness Locator” system to objectively measure response to localized sedation, or blocking. This is important, as it quickly became clear that this would not be a simple diagnosis. 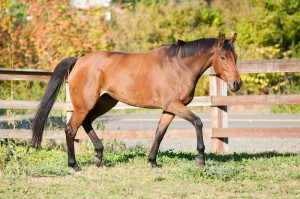 First, the right stifle —the area with the OCD lesion—was blocked. Initial response at 10 min and 30 min was zero improvement. At 60 minutes, there was 25% improvement and at 70 minutes approaching 50% improvement. This left us in a grey area, as Dr. McCracken couldn’t be sure that the stifle was the only issue.

We opted to continue with diagnostics and block the lower leg. 4 injections were done to cover from the fetlock down. Boom! 100% improvement.

Next step was to determine if it was a joint/bone issue or soft tissue problem. We opted to do radiographs on the lower leg and subsequently the foot. No OCD lesions were found, no arthritis, no fractures, no navicular. All images were negative.

This leaves us with a tentative diagnosis of lower limb soft tissue injury; Dr. McCracken believes it’s most likely in the distal sesamoid ligament. Ultrasound would be needed to confirm, but we opted not to ultrasound at this time.

Because Emmy was sedated and the imaging equipment was set up, we opted to x‑ray the left stifle to rule out another OCD lesion. This information would be critical to determining if surgery on the right stifle lesion would be an option. Additionally, another view of the right stifle was needed to rule out the presence of a cyst. Fortunately, the left stifle was clean and we did not find a cyst on the right. Both good news for prognosis.

So, we still don’t have a definitive diagnosis, but we have a lot more information to work with. We are now considering some options based on what we learned, and we’ll have more to report once we figure out how best to proceed. We’re still considering surgery on the right stifle to remove the OCD lesion, but there is also the question of treating the soft tissue, which is likely to mean limited movement and a very structured hand walking regimen, similar to the rehab program that we recently followed with Phoenix.