Biscotti was born at SAFE out of a 5 year old black and white pinto Saddlebred mare named Hope (Registered name “Acquiescence”) that was rescued from a large animal control seizure involving 9 other horses (plus 10 more in another county) in Carnation on February 22, 2008.  Hope was in horrific condition when she arrived at SAFE, and we had no knowledge that she was pregnant at the time, being so thin, covered in lice and rain rot, and with several dead horses on the property.  After a couple of months though, we noticed that Hope was looking a bit rounder in the belly than some of the other horses that had come from the seizure (and we had already had one surprise filly, Ariel, who was born from an Arabian mare named Amber, so we knew the possibility existed that Hope was pregnant).  Sure enough, when Hope was palpated by the vet she had a large, active baby inside her.

“Biscotti” aka “Scotti”, was born on May 12th, 2008, in the early morning without assistance.  He was buckskin, with two hind socks, and we therefore knew that his sire was the cremello Saddlebred stallion Seas the Golden Day, who had died of starvation on the property.  He was a little down on his pasterns at birth, but that quickly resolved.  Hope snuck him out in the earlyl hours of the morning, just before we were getting ready to start “foal watch” as she was only barely bagging up.  Here are his first photos of life: 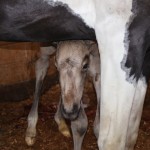 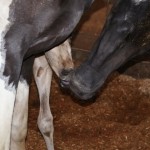 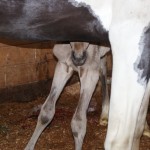 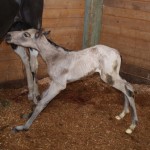 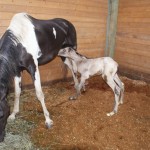 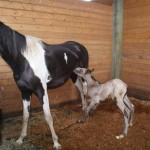 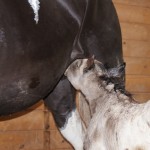 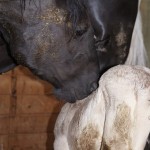 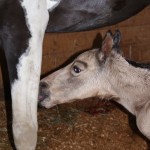 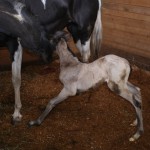 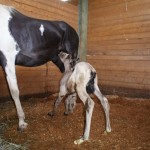 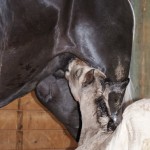