Ben and Lisa Take a Lesson with Michael Sparling

Here is a lovely write up from Lisa G who is training Ben at Safe Harbor. He is gaining a lot of confidence from her steady and caring approach.

I worked with Ben in a lesson with Michael Sparling the other night, and have a lot of things, big and small, to work on over the next couple of weeks. First and foremost is something that we have been focusing on, but need to up the game on a little, and that is building strength, flexibility, and coordination in his whole body, as well as his confidence. We will focus primarily on rolling his hindquarters around his forehand, working up to backing straight out of this movement, and backing in circles. Ben has shown a LOT of improvement in this over the past month, but still has a long way to go, and we are focusing now on doing the movements with softness throughout his body, and moving smoothly and calmly.

Ben has had a snaffle bit put on a couple of times recently, and he reacts very poorly, just to carrying it; head twisting, jaw stretching, tongue out… basically trying to relieve mental pressure via his “funny faces”. I am attempting to reintroduce him to the bit in a way that lets him disassociate pressure, fear, and discomfort from carrying a bit in his mouth. I have started to, and will continue to, do groundwork with a bridle on over his halter, utilizing only the halter and lead to guide him. Michael thought this step was a good choice, but warned against letting it go too long and allowing his fear of the bit become a Big Deal (to paraphrase Buck Brannaman: get to it when it’s a small issue; before it becomes a big problem!), so I will play it by ear, but plan to start utilizing the bit and working off of the slobber strap relatively soon.

I worked Ben a little from the saddle, just in a rope halter, and practiced a lot of hindquarter rolling, gentle directing from the lead, working into 1‑rein stops… which he was doing GREAT with by the end of the session! We did a couple rounds of drawing up to the fence, mounting, moving off, and building a good working walk, then easing back down in pace, and rolling into a 1‑rein stop, all while he stayed relaxed and without bracing against any of my cues.

All in all, I am thrilled to see the changes in Big Ben, and look forward to helping him find confidence and comfort in his body and movement. 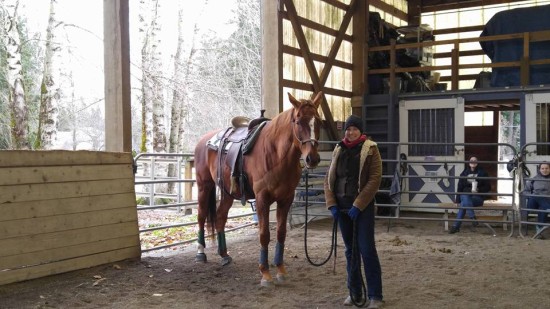