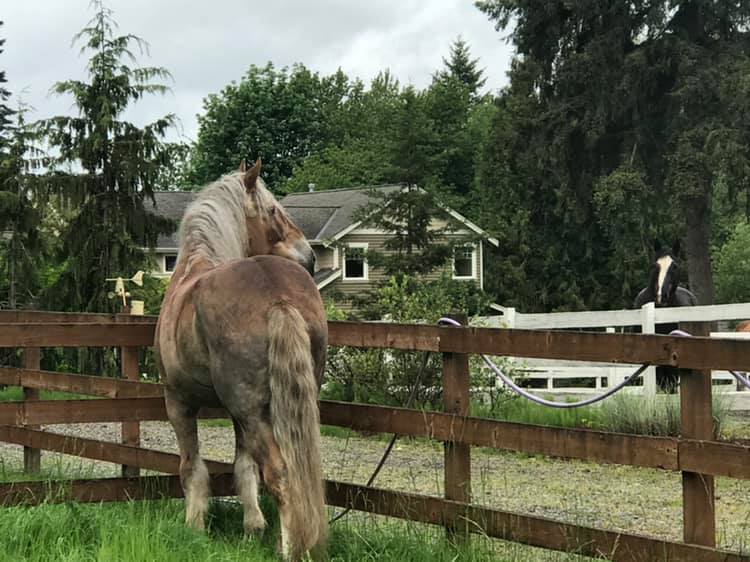 A 17.2 hh draft horse puts a lot of weight on his front feet. So it’s important that those feet stay healthy to help support the horse’s sheer mass. Unfortunately for our sweet Slim, hoof care has been a struggle. It’s unclear whether Slim’s hoof problems arise from a history of poor hoof care or if he’s just one of the unlucky ones prone to chronic hoof abscesses. We will never know for sure. But based on how grown out and cracked his feet were when he arrived at SAFE, it’s not surprising that he has issues. There’s evidence of prior abscesses along almost the entire length of his left front foot. So he has clearly been dealing with this trouble for at least a year, since that is about how long it takes an average horse to grow out their hoof wall from top to bottom.

A few weeks ago, Slim’s foster family called to say that Slim was non-weight bearing on his left front foot. Likely another hoof abscess. Our farriers, Daphne and Andrea, just happened to be a the barn that day so they were able to see Slim and bandage his hoof. Hoof abscesses are usually fairly straightforward to manage and we have enough experience with them that we can deal with most of them on our own, but Slim is not great about holding his feet up for any length of time. So having not one, but two farriers available to tag-team a giant hoof bandage application was incredibly helpful!

Slim seemed to do better that weekend while on phenylbutazone for pain. But when things seemed to worsen the following week, it was clear that this was not a typical abscess and our big Belgian needed veterinary attention. Slim spent many hours lying down, trying to take the weight off of his front foot. The abscess had still not burst, and the slight bump at the coronary band where it had looked like it would come through had grown substantially. Walking was agonizingly painful for him, so he did anything he could to avoid it. His water and food were brought to him in the pasture to minimize movement and pain. Dr. Lewis of Rainland Farm was the doctor on call that afternoon so she came out to examine him.

Dr. Lewis took radiographs of Slim’s foot to check for a draining tract from an abscess, evidence of laminitis, and any other hoof abnormalities. She found signs of osteomyelitis, which is a painful infection of the coffin bone. It also seemed that there might be a small solar abscess with a draining tract up into the coffin joint. A septic coffin joint would be very bad news for this big guy. Luckily, Dr. Lewis tapped the joint and in the process was able to rule that out as a possibility.

Slim’s foot was bandaged up again and he was placed on pain meds and long-term antibiotics to help heal the abscess and osteomyelitis. After another day or two the abscess finally burst through his coronary band, creating a large separation where it meets the hoof wall. Unfortunately, since he also has the pain from the osteomyelitis, the abscess rupturing didn’t offer a huge amount of pain relief like it normally does. So Slim remains on the pain medication for now.

It took about a week on the antibiotics to see much improvement, but Slim now moves a little more comfortably with each passing day. We have been keeping a close eye on things and watching for signs of supporting-limb laminitis in the opposite front foot, since he’s placing so much weight on that other leg while this left one heals. So far there no signs of this which is great news. His hoof bandage is getting changed every three days, and with each dressing change there is a little less drainage from the abscess.

Slim had us worried for a little while, but things are looking up. With continued antibiotics and pain medication, we hope he can make a full recovery. This foot is compromised from all of the prior abscesses, and it will take a year or more for evidence of them to disappear. It is possible that this might continue to be a long-term problem for him. But now that Slim is getting regular hoof care and proper nutrition since becoming a member of the SAFE herd, we hope that these hoof abscesses will become farther and fewer between.