Our little colt is doing MUCH better today! Time for his first turnout! He wasn’t so sure he wanted to leave the safety of his stall, and twice he turned around and went back in the stall calling for momma to come back with him (she was eating grass and had no interest in him whatsoever). Finally he got brave and followed her out. Wow, what a springy high stepping little trot he has! He is ALL Saddlebred, that’s for sure! Once he got out on the pasture, he was testing out those little legs as much as he could. Here’s a few photos (taken with the new camera, what a difference!): 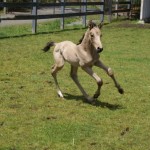 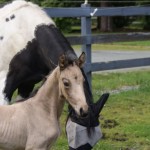 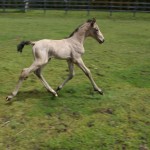 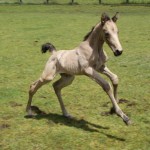 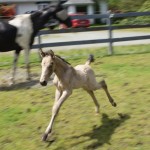 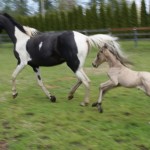 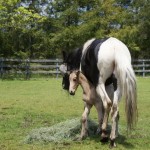 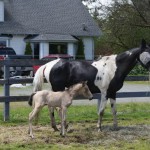 Hope’s being better. She still only nickered to him once in response to him calling her, and it was fairly half-hearted. However, she is content in the front pasture by herself away from the other mares. New moms usually do lose their desire to be with the herd, especially right after a baby is born, but I was worried that she was going to go nuts being away from the other mares. So there is some maternal instincts kicking in, finally! She really is quite patient with all his running underneath her that he likes to do — she just isn’t very vocal to him. He on the other hand, when he runs his laps around her he likes to also whinny as loud as he can, which is hilarious. She ignores him.