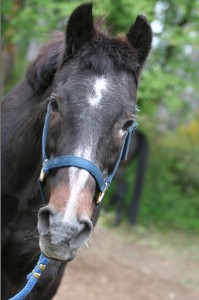 We lost a dear old horse last night. Buckwheat, who came to SAFE back in 2007, had another episode of colic and was humanely euthanized. We don’t know exactly how old he was, but he was well into his 30s. He will be missed very much by his foster family and everyone who loved him. He was a very special horse who had a profound effect on everyone who cared for him.

Our gratitude and thanks to the Romanus family who fostered Bucky at the end of his life and gave him the best of care and love. Bucky looked amazing while he was with them and he seemed very happy and content. Thank you for providing such a wonderful home for him.

We’d also like to thank Carol and Steve Alpiner, who fostered Bucky and his friend Summer for nearly two years, paying for all their expenses during that time. They continued to care for Bucky even after he left their farm, sponsoring him and making donations to SAFE in his name. They even made arrangements for Bucky to be cremated after his passing. It means a great deal to all of us at SAFE that you cared so deeply for these horses and gave them so much.