For the past couple of months, Dexter has been fostered by our friend Kyle and boarded at Feature Farm in Auburn, WA, a beautiful and extremely large, busy boarding facility.  This has been a great experience for him as he learns to deal with lots of horses in the arena with him, including mares, and a lot of comings and goings and constant activity.  He gets ridden regularly and handled daily by Kyle and by our volunteer Abby, who has been riding him in lessons with the dressage trainer there.  Kyle is also a certified equine massage therapist so he gets regular bodywork!

Here is Kyle’s report on Dexter:

The last couple of weeks have been pretty informative. It reminds of when I was bucked off a horse as a working student and was BAWLING to my instructor “I don’t want to ride her; she’s SOOOOOO unpredictable!” and my instructor shouted back, “SHE’S THE MOST PREDICTABLE HORSE ON THE PLANET. I COULD TOTALLY PREDICT SHE WAS ABOUT TO BUCK YOU OFF!” The problem, of course, was that as a pre-training level rider at the time, she felt utterly unpredictable to me, even though a more experienced rider could tell exactly what she was going to do. I think the situation is similar with Dexter.

I think we’ve figured a couple things out about Dexter.

First, he really hates to lose his balance. A couple weeks ago, Abby was riding him and a couple times he would start to rush at the trot, fall on the forehand, rush more, get upset, and then did try to buck a couple of times. She managed to keep it from turning into any sort of incident. When she went back to doing some walk-trot transitions and keeping the trot steady, they had no problems the rest of the ride. They had a great lesson the next day working on the same stuff. As long as he’s forward-thinking the trot can stay pretty slow and steady and he stays quite happy. I do think that if a rider loses her balance or lets him rush off willy-nilly, he could easily get off balance and then revert to bucking. If you keep him trucking along just a wee bit on the slow side to accommodate his conformation, he is very rideable.

Second, I think part of the problem is that when Dexter is being overly low-key, he’s not actually actively being good. He’s simply not doing anything wrong. Then, when he asserts his opinion, he goes from zero to naughty in what seems like a blink of an eye. To narrow the gap between half-asleep and TOTAL MELTDOWN, we’ve been working on making sure he is actively being obedient, not just being blase. WIthin the limits of his abilities, he still has to think forward and be responsive. My guess is that problems occur when Dexter is allowed to make decisions. He does not make good life choices! He’d rather speed up and drift towards the ladies in the ring than pay attention to his rider and when he’s told that he needs to save the flirting for another time, he doesn’t like that! The thing is, If you catch him testing early and quietly, he is REALLY easy to shut down. All it really takes is just disrupting whatever he set his mind on with something as simple as a halt or a downward transition to walk. Do that a few times and he gives it up pretty quick. I do think that if a rider got nervous and did nothing, he would immediately take advantage of the situation and a little bit of attitude could quickly turn into a full-blown meltdown.

So far, I haven’t seen any issue that isn’t perfectly normal for a strong, smart, quick six year old. He does have that stallion-like way of thinking where he digs in for a fight, but he’s way more bark than bite. As far as I’m concerned, he’s a total lamb!

The other thing I’m wondering is if one of the previous owners had a severe saddle fit issue. He’s hard to fit. We’ve jerryrigged a 16 3/4″ Neidersuss so that he goes comfortably in it and it doesn’t go past the last rib. No, neither Abby nor I are particularly suited for a sub-17″ saddle, but there it is. He does paddle a bit with just the left front and might have a bit of scar tissue up by the scapula. None of this seems to bother him in the slightest, but it made me wonder if, at some point, someone had a really poorly fitting saddle and he’d simply had it. Maybe, maybe not. Total speculation on my part.

Oh, and I had his feet trimmed last week. We debated between doing them last week or waiting two weeks and Pat thought we should probably do them then. They look great. He pretty much followed Daphne’s trim. There were no real changes. And as much as farriers like to bitch about each other’s work, Pat had no complaints about Dexter’s feet! A miracle!

Overall, I think things are still going well. We’ve mostly been walking and trotting thus far and letting him canter in the round pen. Abby and I are both so tall on him that we’ve been waiting for his balance to improve a little bit before tackling the canter. I felt this last week that we’re about there, so we’ll start trying to spend enough time at the canter that he’d be rideable for a prospective owner. We’ve had no real problems with mares. He’s stalled next to a mare who has been in season and a hussy about it and other than wanting to drift toward her in the arena, there have been no problems. Also, zero issues challenging fences or getting upset outside. I turned him and Reel out yesterday but I had to bring Reel in first because Reel completely melts down alone outside. So, Dexter was completely alone for a few minutes while every horse in the barn was inside eating lunch. Didn’t bat an eye. I believe that he must have done something in the past, but I have been completely unable to replicate it here.

Here are a few photos (cell phone quality) taken during Abby’s lesson a couple of weeks ago.  Looking good Dexter! 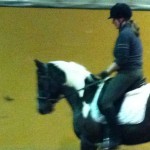 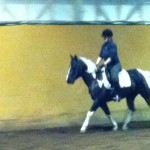 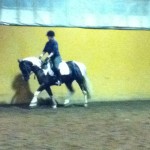 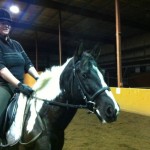