I’m sad to report that Dexter is back at SAFE. While I like to hang out with him- I was really hoping to never see his cute face again. He was a very good boy for his potential adopter for about 2 months and then he had some behavioral issues and was returned. It sounds like this incident was pretty similar to what I experienced with him at the SAFE show.

Dexter is an easy guy 90 (or more!) percent of the time… but he’s got an insecurity streak in him that creates a bit of a jekyl/hyde situation. While he’s very consistent at home, once in a while when he’s out (it’s not every time, it’s not even most times… just sometimes), for whatever reason he just seems to lose it… and once he’s lost it it becomes dangerous to ride him. Then he goes home, resets and is back to his easy going self. The good boy in dexter (who you get to see MOST of the time) does not buck or rear, even when you push him pretty hard and he’s not really thrilled about what you’re asking. When “lost my mind” Dexter shows up, well, all bets are off. Whoever ends up as his for-ever person just needs to understand this and be prepared to deal with it.

Overall, he’s a sweet, easy to handle guy. Easy to catch, super to tack up and groom. He’s a bit of a pain on the lunge line (he insists he has NO Idea what you’re asking him to do- but is all a bluff) but if you call his bluff- he’s fine and easy.

I rode him today and he was a good boy. He has definitely made progress in his time away and his trot has greatly improved. He’s also retained his steering and become a tiny more willing to bend. 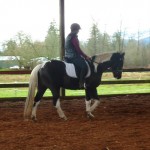 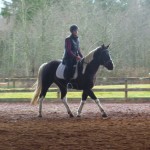 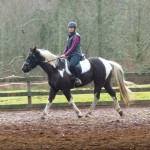 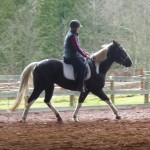 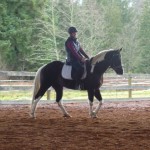