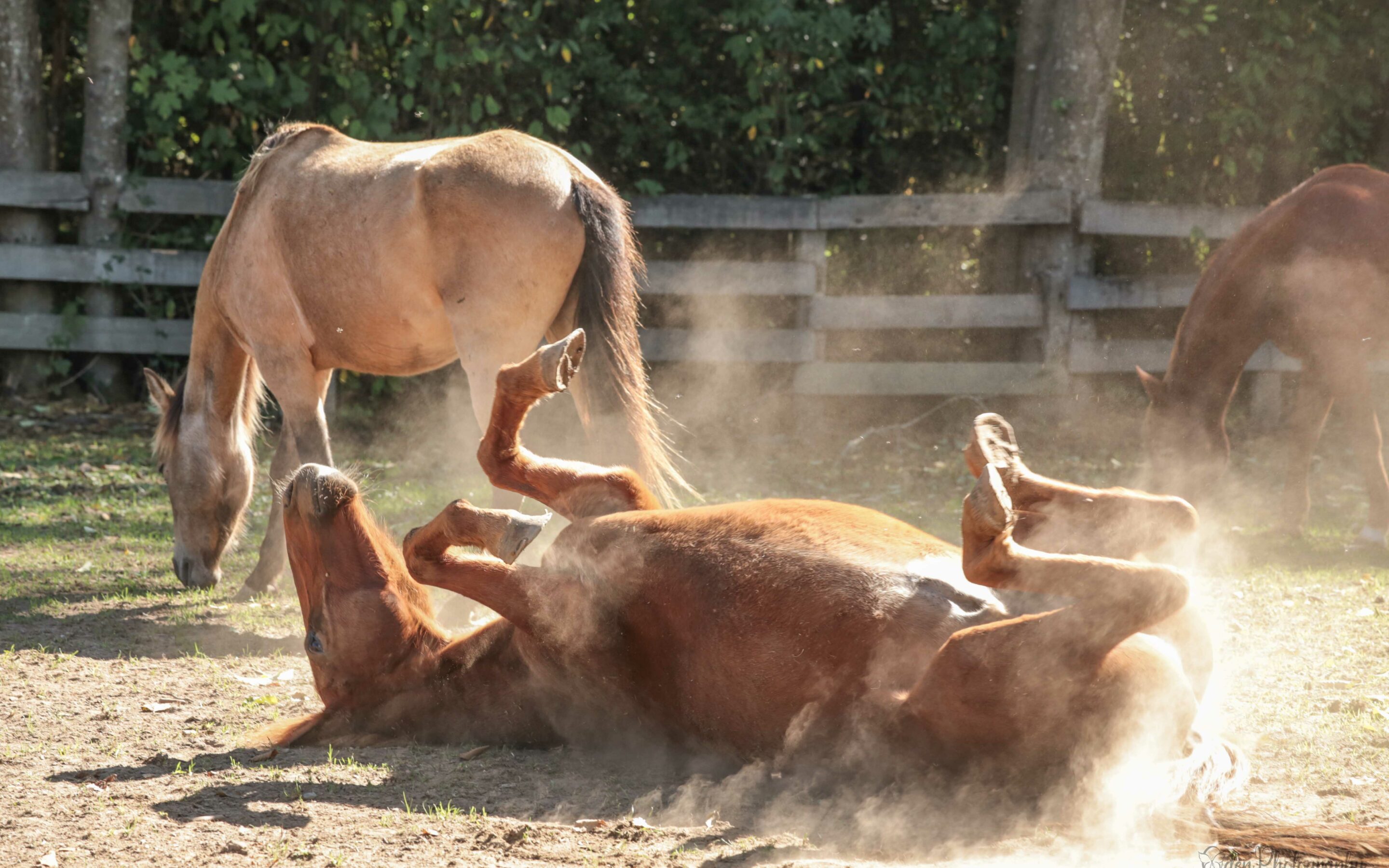 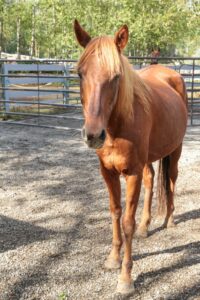 We are moving at a fairly good pace with Edward despite his continued breathing issues. He is still very wary about people approaching him to be caught but each time he is quickly haltered and doesn’t have the opportunity to get away, he finds the event less and less stressful. Part of the problem with horses that have had some halter work in the past is that they have learned where the “outs” are from getting caught. They have been rewarded time and time again, for evasion when people have tried to halter them and failed. That is a learned behavior and a very hard foundation to change.

At this time, I am building trust with Edward and he understands that my patience will outlast his maneuvers to get around the issue of getting caught. Sadly, the poor haltering in the past also taught him to pull a bit of a nasty expression and he has tried a few times to take control and move my feet. Luckily when he charged me, I was able to get a change that has carried over in the days that have followed. Simply put, I rewarded the smallest of tries, made the wrong thing difficult (not impossible) and the right thing easy. Horses naturally are going to move away and don’t try to aggressively come towards a person’s space unless they feel trapped and are given no other options. Those who have learned that pushing into a person makes person back off will try this as a way to get people to leave them alone. Edward is at a crossroads in his life, and we are thankful he made it to SAFE. Here can help him bring about the changes needed so he can have a safe and happier life with people.

He still needs a lot of work. We are helping him search for the right things by making them always the easiest and rewarding his try. He is rewarded when his feet are free and he finds balance with all four feet reaching equally. He tends to push and become heavy on his inside shoulder. Once he finds balance he will be move more comfortably and won’t be heavy or stuck in his feet. Right now, we continue with clear short amounts of work that help to “get life”, energy and freedom in his feet.

Health-wise, he is now at a great weight. He’s seen the farrier for trims on all four hooves. He’s also been vaccinated and is scheduled for a dental next month. We have introduced him to a nebulizer to administer medication to help with his breathing. Training for that has gone well and he has begun a course of twelve days of medication. If that improves his breathing, we will wean him off the prednisolone we’re currently giving him. If all goes well we will be able to lower the nebulizer treatments to a few times a week as maintenance, which he may or may not need for the rest of his life. 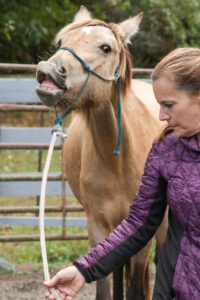 Esme has been great to halter and was well prepared and well behaved for her first farrier visit. Since she has been easy to catch, she has not gotten as much attention in the groundwork as the other more difficult new intakes. Well that stops now! Time for this little one to get busy. She was poorly halter broke coming into SAFE and needs to relearn the foundations of haltering. Like Edward, she had learned through her previous experiences with people where her outs are and that she can run over the top of her handlers. Our first goal is for her to learn that she can move freely without pushing on the halter. Just plain better halter starting work. Learning to back and to freely bring her front across, being consistent with the freedom all four feet while backing and moving them equally will continue to help this cute little mare improve.

Esme has a very sweet personality, but can get a panicked expression since she was never taught to freely move around on the halter. The work we’ve done has already shown us a more relaxed and peaceful mare that should make changes quickly and move towards becoming a riding horse in the next few months. 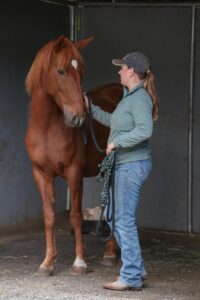 Overall Jacob has been a gentleman to work with and is very kind-hearted. He is not over reactive and has accepted the work very well. He has been vaccinated, wormed, seen the farrier (was prepared and had absolutely no issues picking up all four feet), and is scheduled for a dental next month. He is a big handsome dude horse and will move through the training program quickly. His main goals currently are to bring up his energy, and give him a big reward for his try. Overall he looks relatively sound but has some muscle atrophy along his left hind side. We will work to help him strengthen his hind quarters and if needed, have his soundness evaluated by our vets. These three horses were living in very poor conditions for many years so the process to full health and recovery will take time. We have a very good feeling he will make a great riding partner and we will give him all the support needed to make that a successful endeavour.