Eye Surgery is a Success 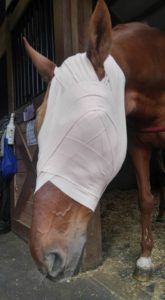 We have good news to share: Anakin had his eye surgery done last Thursday and it was a complete success. He spent the night after the surgery at Rainland Farm Equine Clinic so Dr McCracken could watch over him following the procedure, and he was released into our care the next day. When we came to pick him up, he was waiting in his stall with his head neatly bandaged, and he seemed so relieved to see us. He pressed his nose up against the stall door so we could touch him, and gave a couple big sighs. He is so fond of his people.

On Monday, Dr McCracken came out to change his bandages, and everything looks good. He’s still pretty swollen, but the incision is clean and healing nicely. He doesn’t seem to be having much trouble navigating without the eye…which is what we expected since he was nearly blind in it already. He seems cheerful and comfortable, and that was the outcome we were hoping for.