Finn has been in ground work for the past several weeks, and he’s been very impressive! He’s made a big impression on Laura M who has been coming to Safe Harbor Stables a couple times a week to help Terry with ground work. Laura is very enthusiastic about Mr Finn…she wrote this update after the first time she worked with him: 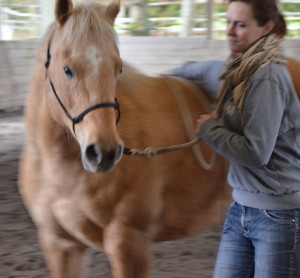 OMG I am COMPLETELY in love. Utterly, ridiculously besotted – the kind where you scribble the guy’s name all over your school notebooks and work his name into all the silly songs on the radio. The kind where your friends roll their eyes every time you start a conversation because every other sentence starts “Finn says…” or “Finn did this funny thing the other day…”. Smitten. Head-over heels.

This “Channing Tatum” of a guy is just everything that *I* personally want in a horse…now of course, I’ve only worked with him once and he’s only at the very beginning of his training with us, and everybody’s tastes and needs are different — but I can’t help thinking he’s going to make a heck of a companion for some very lucky person. There is SO much potential there.

To start with, Finn is built like a TANK. Stunning dark palomino color with thick salt-n-pepper mane and tail and mounds of muscle. He’s not tall – maybe 14.1 or so (we haven’t measured him yet) but I bet he weighs 1,100lbs if he weighs an ounce…big wide chest and a butt that won’t quit. He’s short and stocky on powerful little legs, and he can MOVE on them. His stops and turns are lightning-quick and seriously powerful – I’d definitely want a horn to grab onto!

He ground-ties to groom no problem. He isn’t super-helpful with picking/holding his feet up to be cleaned, but I am guessing that less-than-awesome foot care (and thrush) means that there’s some discomfort associated with his feet, so that’s no big surprise. He doesn’t snatch them away, but is reluctant to pick them up and will kind of fidget with them while you handle them.

He backs so easily on just the second day we’ve asked for it from him; it’s wonderful. He’s still not super-comfortable about being asked to do stuff – a little on-alert – but very attentive and willing, and tuned in to his handler. He takes cues so readily, and wants to please – he’s just not got a lot of experience and is a bit nervous.

Lunging him is pretty easy – he’s not super-balanced, and is SO light in the halter and watchful of his handler that he’s over-bent to the inside most of the time. I think that will become less and less of a problem as he gets more experience.

He is super-responsive and eager; it’s best to keep to very quiet, steady cues. I can see how he might ramp up quickly if he gets too worried or frightened, and he’s SO heavily-muscled and athletic that it can probably be pretty dramatic if it happens. He needs to build confidence and trust. He seems like a steady kind of guy who hasn’t been handled much and is simply in a new situation now with more demands than he is used to. He needs time to become more experienced with people and all our weird requests for behaviors from horses (backing, lunging, moving various body parts around, picking up his feet, etc). 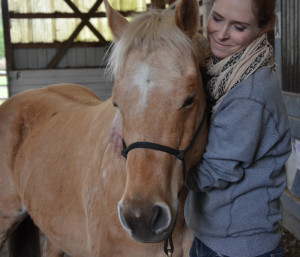 He did quite a bit of head bobbing at the trot to the right, unfortunately. I am not sure but I would guess that the pain is somewhere in his right shoulder or leg – that is the foot with the crack in the hoof, but also supposedly he had a knee problem (?), and it’s the shoulder where his puncture wound was – so we can take our pick of causes. It does come and go a little bit, and seems to get better as he warms up. It’s much better on a large circle than a small one. He seems mostly sound at the walk and also the canter, though he couldn’t maintain the canter very long.

To the left, he seems pretty much sound – didn’t see head-bobbing, though he over-bends that way more, so his movement is kind of stilted and odd anyway.

Overall he is still new enough to lunging that it’s hard to get consistent gaits and really judge soundness with any degree of detail– but he’s definitely lame SOMEwhere when he trots to the right. I don’t see it so much when he’s at liberty, but he’s mostly moving in straight lines then.

We worked on flexing, and even though he is really light in the halter under other circumstances, he’s tough to flex. He’s got a very short, thick neck, so it’s probably not the easiest thing in the world for him to do, too. But again – he’s so willing and eager to please, he made good progress.