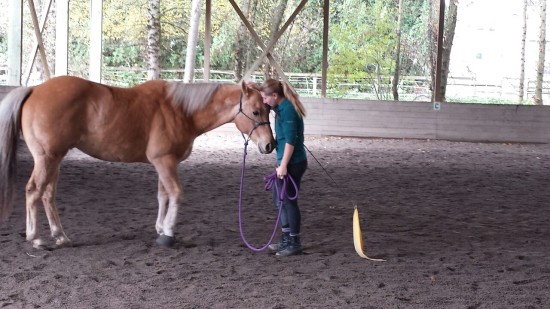 We’ve had a setback with Finn’s soundness this month. He has had some slight stiffness and isn’t looking as comfortable as he had been. When farrier Jake came to put on his new shoes last week, we noticed a bruise next to his frog on the right front. There was no indication of a rock or anything lodged under the pad. One thought was that the pads with built in frogs may be putting too much pressure on the soles of his feet. After trying a few ideas, we decided on a flat pad.

A few things to note: Finn has extremely soft hooves and Jake is very careful to lightly clamp the nails down. Too much clamping and the nail pulls straight down. Finn had a hard time with nails this shoeing. On the right front, his “better” front hoof, the nails would go in fine, but when it was clamped, Finn would take off steps. This happened when we were trying a bar type shoe that would wrap around the heel. The pain may have been from too much heel pressure.

Now he is 80% sound compared to where he was before. If he’s not back to normal next week, we may put him back on Previcox for a week to see if that helps. Jake also thought that we could try some dental impression material inside the pad next time to help stabilize the hoof. Finn’s heels are almost too expanded and as he steps this extra flexing on soft hooves might be part of the pain.

Another area of discomfort is his right shoulder where he had the puncture wound prior to his intake. When Jake holds that leg in a certain way, it is clear that Finn doesn’t like it. He also will take a few bad steps after this leg is worked on. He also looks very stiff and somewhat sore on the hind legs. We had the chiropractor come out last week to work on him, but it didn’t seem to help much. He tends to drag both hind feet and “shuffle” the hind to trot.

Finn is a darling horse, and we are working hard to figure out the answer to relieving his discomfort. We are still holding out hope that we can make him sound enough to at least carry a rider at the walk.