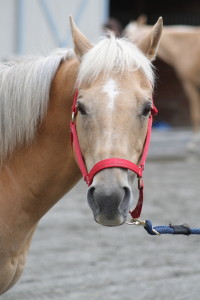 As we talked about in his last update, Finn needed some special treatment and thanks to Jake Cowden, he has been able to get the shoes he needs to feel great. We gave him a few weeks after the first set of shoes to getting used to moving in them. When we trotted him out, we were very happy to see how much better he looked. Last week he got his second pair of therapeutic shoes and everything is going very well. He has been introduced to trot poles, and while he is a bit clumsy over them at first, they help him get a nice rhythmic trot, free up his shoulders and pick up his hooves. We have reintroduced the saddle and bridle again and he is less concerned with them going on and working with them. He remains a constant gentleman, easy to handle, groom, bath and exercise.

I decided to introduce him to a new girl friend, Skittles, this past week. At first they both pretended to ignore each other but by the end of turnout I could see a friendship budding. When I took them back to their stalls they each called out to each other checking in on one another. Finn is a very sweet boy and anyone would be happy to call him their friend.