We have a new horse to introduce. His name is Finn and he is a 14 year old Quarter Horse gelding. Finn was injured in his pasture when he impaled himself through the muscle of his right shoulder. His owner was unable to afford to have a vet out to see him. She treated his wound herself for a few days but when it began to become infected, she called SAFE for help. Fortunately with the recent adoption of Nora, we had a space available and were able to take him.

Finn was signed over to us, and we delivered him straight to NWESC so that Dr Hannah could see to his wound. She discovered that while the wound was extremely deep, it was angled in such a way that it was draining well, and she found no debris remaining in the wound or signs of necrotic tissue. Finn will remain at NWESC for further treatment of the wound, as it is important that it heals correctly from the inside out.

Finn’s previous owner told us that he was injured while being started under saddle as a young horse, but we are unclear as to the exact nature of his injury. He has a badly cracked front hoof, and the crack appears to be growing from the coronary band. Other than these issues, and his injury, Finn is in good health and is in fact a bit overweight. We’re getting him up to date on teeth and shots, and we hope that he’ll be released from NWESC in another week or so. He’s a very sweet horse, and we have high hopes that we’ll be able to find him a new home where he’ll get the care that he deserves. 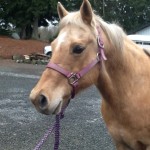 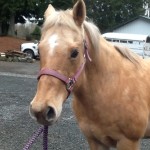 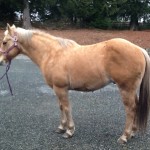 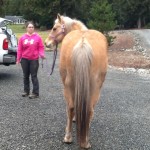 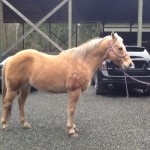