We have found a fantastic foster home for Finn. He is alone for the moment but has an entire herd of horses across the street to keep him company until his foster person finds a horse of her own. Finn’s hooves seem to be feeling better on the soft hogsfuel footing at his new foster home and he continues to improve with each shoeing.

Here is the update we received just a few days after Finn arrived: 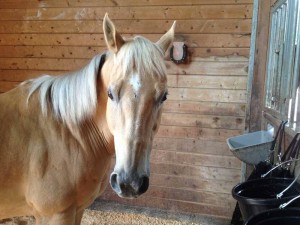 I think there’s been a mistake. I was expecting a horse, but you guys left a yellow lab here instead! He’s awful large for a dog, and you somehow attached hooves where his paws should be, but the way he follows me around and checks in for scritches every few minutes is more canine than equus. I even got him to roll over. Tomorrow we’ll try playing fetch.

No, seriously, he’s so easy. He’s whinnied a bit in response to the horses across the street, but then he gets back to his hay net and looks relaxed again. He’s been exploring and the first thing he did outside was roll over eight times…eight! I should have videoed but didn’t have the presence of mind. He was so confused poking around out there; he was looking for grass so hard but there just isn’t any.

I’ll let you know if we hit any bumps in the road. I get the feeling he may be okay here! 🙂