Getting to know Dylan Palm! 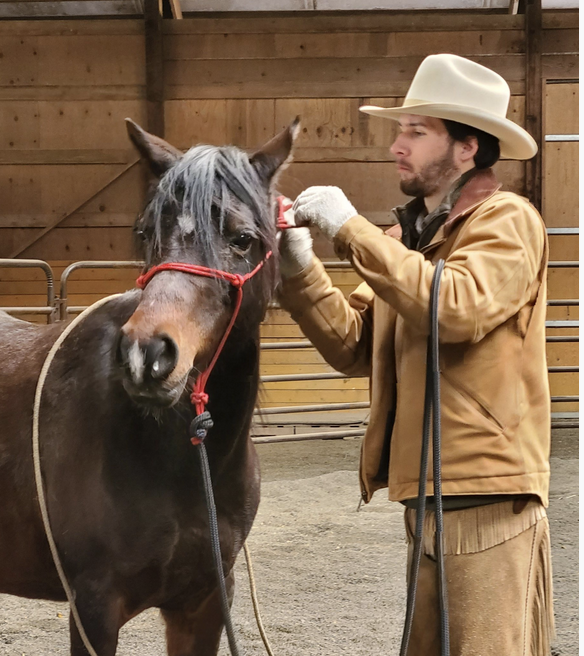 Tremendous thanks to Caren McMillen, who interviewed Dylan and provided this write-up to help you all get to know him better! Thank you, Caren, you are one in a million!

Dylan Palm became the Sunday Barn Manager at SAFE when Julien Dreher left for college. But because of the coronavirus situation, Dylan ended up on not one but FOUR daily shifts at the barn, in addition to helping Terry with the horsemanship program. Dylan has played a major role in keeping SAFE going during trouble times, and we’re glad he came along when he did. Here’s an introduction to Dylan, in his own words:

A Lifelong Passion
“I was born and raised in Washington. I’m from Machias and am currently living in Snohomish County. I’m engaged to Jillann Schroeder and we’re planning on getting married toward late summer, early fall of 2021.”

“My whole life I’ve always been interested in horses for as long as I can remember. My grandpa bred quarter horses. I started hanging out with him and he’d show me a couple of things. He was kinda rough with them. I had started a little Arab horse when I was seven, so he had me out there riding green horses when I was a kid. It was fun, good experience.”

“When I was ten, my grandpa died and left me a colt to start that was born out of the first one I had started. We wound up having to sell her, so from the time I was twelve to seventeen, I didn’t have a way to do a whole lot with horses so I had kind of a gap. I was in the Civil Air Patrol cadet program for those five years and that’s where I met Jillann. Afterward, I got a job in Snohomish working at a barn and started to work with horses professionally there and teach lessons.”

“As far as accomplishments, the biggest thing that stands out to me is Charlie. He was a troubled horse that I helped and he taught me a lot. I rode him in a Buck Brannaman clinic, three years ago. That’s probably my biggest accomplishment in getting that horse to make a change and turn around to where he was okay with people. Working with horses, that’s all I ever wanted to do since I was a little kid. I’ve always really been interested in colt starting more than anything because that’s kinda where I started. And the bridle horses have always been a major interest of mine.”

Coming to SAFE
“I first learned about SAFE from a couple of people talking about rescues and my old boss really like SAFE and what they were doing. The first time I came out here was after I met Joel [Conner] and he had suggested I come watch a horsemanship clinic that he was doing. “

“I don’t have a favorite horse here at SAFE. I like Piper, Piper has a lot of potential, but I like all horses. I do have a favorite horse, but he’s not here. I’ve currently been working with Millie and Pearl and I’m going to work with Jill and Tilt today. I had worked with Mina quite a bit in Joel’s clinic and will do more with her. I rode Zoë in a clinic and I’ve worked with Banner. I’ve also worked with Lola, one of the alumni horses. She’s a real nice horse.”

“What’s been important to me is just being able to work with horses and not have to work a ‘regular’ job! I get here [to SAFE] and then it feels like ten minutes later I’m leaving. The day flies by quick.”

Dylan would like to write his autobiography someday and I’d say this young man will have some great material to work with!