Her Name is Lola… 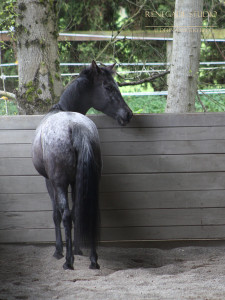 We’ve been a little quiet on the subject of Lola, but that doesn’t mean that everybody’s favorite Sassaloosa hasn’t been hard at work behind the scenes. Lola’s actually doing really terrific right now and we want to get everyone up to speed with what’s been going on for her.

Lola’s training came to a bit of a halt at the beginning of the year when we realized that we didn’t have a saddle that fit her very well anymore. So while searching for an adequate saddle, Terry spent several weeks focusing on ground work and liberty work with Lola. This sort of interaction had a great effect on Lola’s outlook, and Terry feels it did wonders for their relationship. Terry describes Lola as a mare who is not a pushover, someone whose respect has got to be earned. Once you’ve earned her respect, Terry says, Lola will then do just about anything for you. She’s got a very strong sense of what is fair, and she doesn’t take kindly to being treated in a way that she feels is unfair. Terry says she’s really a very sweet horse, but that it’s important to establish a respectful relationship with her first. If you’re hesitant or uncomfortable around horses, Lola will figure that out immediately, and then you may find yourself at her mercy if she decides she wants to go eat grass instead of working, for example! Earn her respect, and you are well on the way to an amazing partnership with her.

By the beginning of February, a nice Western saddle was loaned to us that fit Lola very well and allowed her noticeable freedom of movement in her shoulders and back. She and Terry started back into work together and at first, it was all about taking baby steps with this little mare. As we learned from the work that Brittney did with Lola last year, Lola was pretty adamant about testing her rider with a number of different evasions before settling down into some lovely work. Terry decided to take a different tack with her, and starting riding Lola with little to no contact in the reins. She describes a moment in which Lola decided to get upset and start something with Terry, but upon realizing that she was on a loose rein, seemed to surprise herself and sheepishly realize that there was no reason to get upset after all! They also had some disagreements about going forward, so Terry took her way back to basics and worked with a ground person at first, and then graduated to a lead pony (Kat being the best one for the job).

By taking things very slowly at first, Terry discovered some interesting things about our Lola. First off was that sense of fairness we’ve already mentioned. Lola will go beautifully as long as she is ridden correctly and fairly. Terry says her own timing has to be spot-on, so that when Lola deserves a release, she has to deliver that release quickly. She feels that Lola’s standards are actually making her a better rider, and you can see why! Lola really seems to dislike a lot of contact, but Terry says that if you keep light contact and ride her forward over her back, Lola has natural, beautiful self-carriage. She’s also extremely athletic, with a very solid, balanced feel to her, and she’s as responsive and maneuverable as a sports car. She’s a lot of fun to ride.

Terry is pleased to report that over the last two months, she’s actually seen no naughty behavior out of Lola, no attempts to unseat her or make her feel unsafe in the saddle. Again, the relationship that she and Lola have established through ground work and lots of time together has undoubtedly changed the way Lola views Terry — she sees her as a partner and not an adversary. Terry says it’s time to put some of our volunteer riders onto Lola to see if she changes the game for a new rider, fingers crossed that she’s matured past the point where she feels the need to test everyone who gets on her back.

So Lola is once again reaching a point in her training where we are almost ready to look at applications for her adoption. She’s going to require a confident, experienced rider who is willing to put in the time that she’ll need to establish a relationship, but the payoff is a young, healthy mare who will take her partner as far as he or she wants to go. Lola has been a SAFE horse since she was 6 months old. She’ll be six years old at the end of June, and we’d love to see Lola celebrate her birthday in a new home with a person of her very own!