A little dirty after a good roll

When I was told that Jewel would be moving back from foster, I was warned she had a history of being a bit of a stinker.  I thought for a long time on how to prepare the barn for this little rebel and what ways I could set her up for a successful transition.  We played a little musical stalls and left an open space between her and the other horses to ensure no kicking or broken fences to mend!

When I heard the trailer pulling up I was ready for a sassy little mare to pop out but to my astonishment this fluffy doll face peaked out from the trailer and walked off like she been in and out of trailers a thousand times!  She walked easily into her new stall and pleasantly began eating her hay.  She fit right into the routine of the barn and never once squealed or kicked at her stall and instead knickers to her neighbor Miah.  I think she is laughing at me for being so careful but better to be over prepared.

I turn her out in the arena for a little play time and she bucks a few good ones then comes to me for some love and to be taken out for grass turnout. She is currently going out with Maggie and Miah.  The two older mares are a little annoyed by the little youngster but over all they graze quietly near each other.   She plays a bit, loves to roll in the dirt, and sometimes give a few good bucks before relaxing in for some grazing. 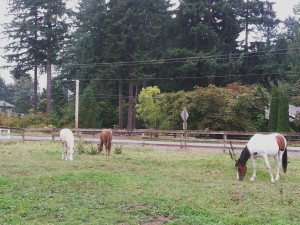 She is a bit on the skinny side, probably due to a little growth spurt this summer, so we are giving her lots of good hay and some rice bran and vitamins to help.  Her winter coat is also well on its way.  She has been pleasant to groom and I have begun working with her on some basic ground manners.  She is easy to halter and leads well however she is still hesitant to halt or backup but after a few easy corrections she is able to do both on command.

Last week we started to introduce the “dreaded” fly spray bottle.  Her foster mom had done some work with this as well but she is still very afraid of it and did protest; nothing too bad just a roll of the head and a few scoots away from the bottle.  We ended the session on a good note and accomplished a little spray touching her shoulders. We will continue to work on establishing trust and ground manners but would love for this youngster to get another great foster or better yet to find her forever home with lots of room for this little one to play.

She may have a few little jagged edges to polish out but I believe that it won’t take long until this jewel shines like a diamond!