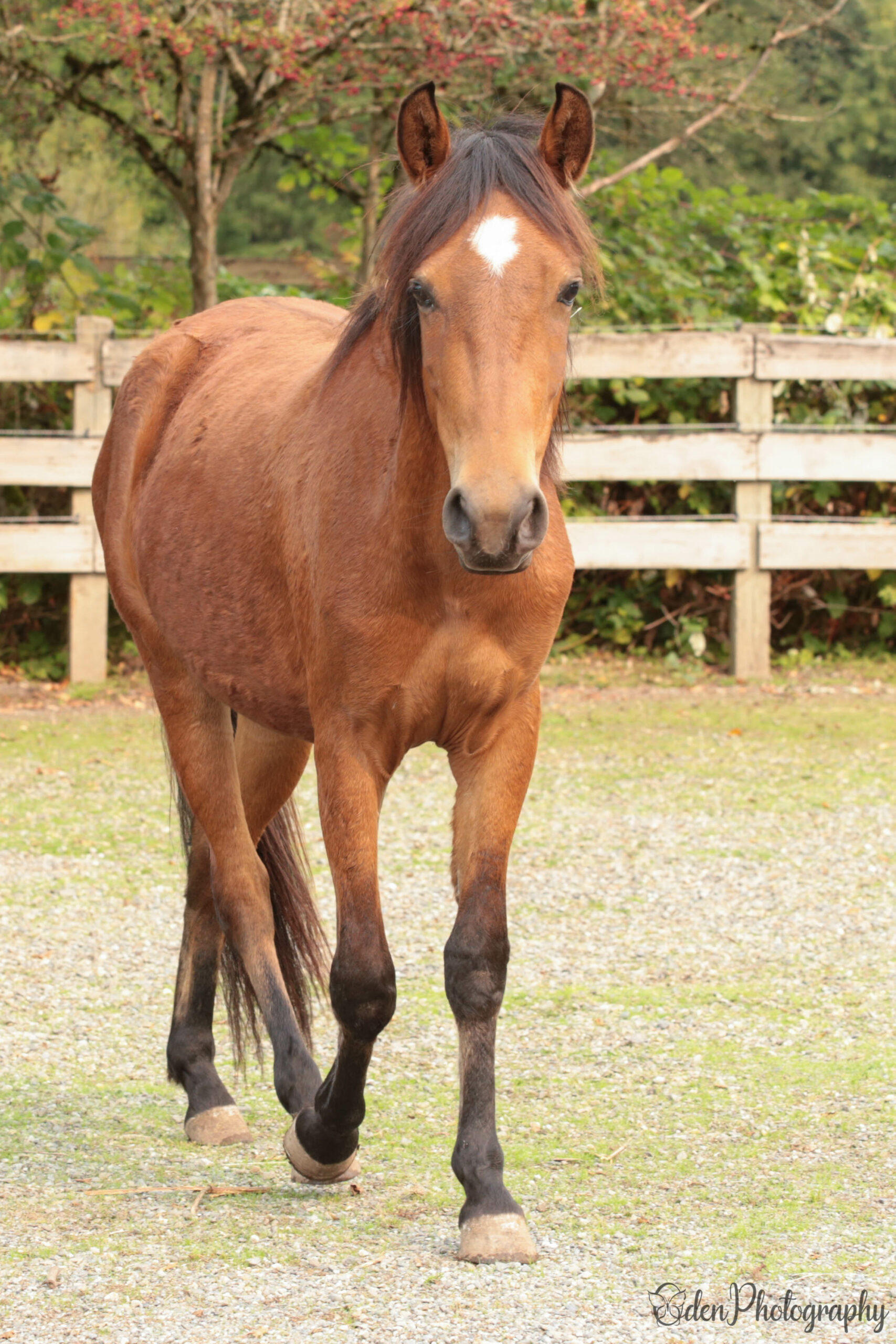 Here’s a clinic report from Sarah V who worked with Barb, one of the Fall City 40 horses:

I’d never worked with Barb before Thursday of the clinic, but was really excited to have the chance. I was onsite in Fall City in July of 2019 when we were trying to separate some of the mares and foals from the 9 studs they were sharing a pasture with. The unhandled herd spooked and started racing around and we watched in horror as tiny Barb slammed into and over a barbed wire fence, jumped up, and took off across a neighboring property. It took quite some time to track her down and rejoin her with the herd, but luckily all she suffered were some minor scrapes.

Working with her today, you’d have no idea that she was once so terrified of humans that she’d run into a barbed wire fence to escape them. This adorable filly was saddled by Joel for the first time at the November clinic and all of the groundwork done by volunteers in the horsemanship program leading up to the clinic made that milestone relatively uneventful.

Joel noted that Barb is a bit “hard” and braced in her hind, but I’m also still working on honing my own feel and timing to better “offer a good deal, pick up the pressure until I get a change, and then release.” Barb was starting to get a sour expression because I was staying in my ask too long, neither increasing the pressure nor offering a release. Because Barb is young, Joel encouraged me to not “nag” her by continuing to ask with the same level of feel without getting a change. He instead encouraged me to increase the pressure as needed, and make sure I release immediately once she makes a change to reward that try as soon as possible and keep her from getting sour.

She had a tendency to rush from hindquarters to front quarters and crowd the handler some, so we are continuing to work on that. Joel corrected my inclination to want to stop her when she moved forward without direction from me, saying (particularly as a young horse) we want her to be free in her feet and know she can move, so I should instead work with that forward momentum (rather than getting uptight about her making a mistake), and just ask her to do something different.

In my groundwork prior to saddling, Barb was calm and steady with being touched all over with the coils, and relatively unbothered by the flag or moving with the rope around her hind and barrel.

Once she was saddled I repeated the groundwork, and Barb was amazingly great with me noisily tapping the saddle all over with the coils, flagging her, having the rope around her hindquarters, and moving the stirrups all over each side. When I took her halter off and moved her out, she had only a few tiny bucks and offered lots of forward, including a very smooth looking trot and lope. She’s a nice-moving little mare! When moving her out, she would sometimes get in a zone and tune me out, just loping around the round pen, so at those times Joel had me change direction or do something else to help her refocus on me.

Joel gave me some instruction on my extremely limited roping skills and Barb was a champ about letting me inexpertly toss a coil over her back or towards her hind legs while she was trotting around the round pen. The second day, she had a bit of a cinch sore, so we didn’t saddle her, but repeated the groundwork.

On Saturday we worked on bumping her up to the panels (my first time doing this myself), so that she could get used to a person being above her touching her on both sides (which requires changing eyes). It took some time for both of us to figure out (me to experiment with the type/duration/pressure of bumping her in the right way to help her keep searching for the right answer which was to line herself up along the fence), but when we did it was AMAZING. Barb got lots of pets and scratches, and was interested but unworried about me reaching over to move the stirrup on her off-side, tapping the saddle, rubbing her neck on both sides, and waving the flag over and around us.

On the final day of the clinic, the cinch sore was no longer bothering her, so we saddled her again and she did really well. When I tried bumping her up to the panels she positioned herself correctly almost right away and got lots more pets and scratches and we did a bit more with the flag and off-side stirrups. She was alert but relatively relaxed for all of it. If she started to walk off, Joel had me let her, but then bring her back next to me. My homework is to keep working with her to improve her hindquarters, and also to work on the dynamism of my feel and timing of my releases to make her more responsive and free.

I’m so grateful for the opportunity to work with this smart and adorable little mare, especially because it’s challenging me to more finely tune my feel and timing to help her better understand what’s being asked of her and feel capable, respected, and free. I’m really looking forward to continuing to work with this cool little horse and can’t wait to see how she grows!