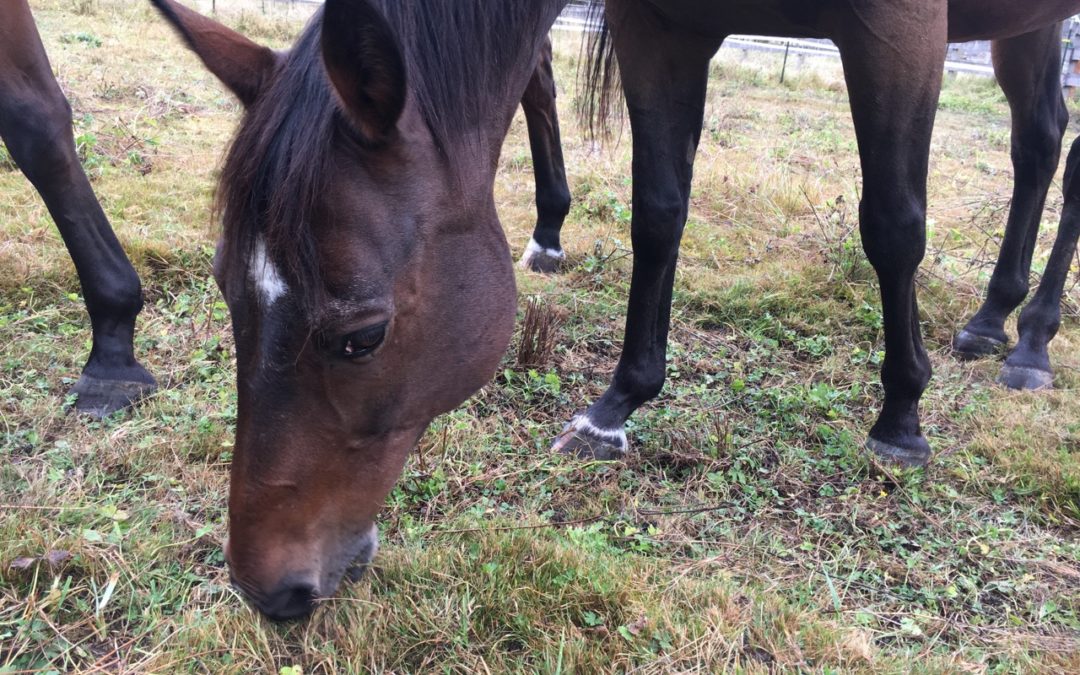 Justin is doing very well in preparation to become a riding horse. We have spent a great deal of time strengthening him and getting him balanced to hold the weight of a rider. He initially had trouble transferring his weight off of his forehand and over his hocks. He would get stuck with his front feet when asked to yield in the front or when backing up. This “vapor lock” would panic him and cause him to be unsettled and even a bit explosive. But over time and with the use of groundwork Justin has been able to get free in his feet and gain balance and not feel trapped. He knows now that he has options to move and with that freedom he feel relaxed and peaceful with his handlers.

He was very “girthy” when we started saddling him. He would turn and try to bite us or move around trying to escape the saddling. At first we allowed him to have some movement in his feet and went with him as to not make him feel trapped by the experience. Over time this helped relax him, but the biting was still there. To help correct this, we took things very slow. Working with just our hands around the cinch areas, placing the pad off and on, and finally adding the saddle. It took time and patience but things have greatly improved. He still needs some correction not to bite when we start saddling but he’s getting better. This is something that will continue to be watched and worked on. All we can do is to continue to offer good experiences that reward try and are fair and kind to him. The changes we have already seen over the last few months is evidence that Horsemanship works and positive change is possible with time and patience.

We are planning on getting Justin backed in the next month. We have done an extensive amount of groundwork to give him new healthy experiences with people. In order to help him through this trouble, we have “put him in a bind” to expose the points where he may attempt to get stuck and try to flip. Other than being completely stuck in the front end he did not ever take it to the extreme of rearing or flipping. We always had a door open for him to comfortably move into so he has felt safe enough to get through troubled spots. He is very healthy now and you can visibly see him rock his weigh onto his hind and free up his front quarters to turn around. He is relaxed and calm when bumped up to the panels with someone sitting above him. He does not overreact to the flag and is getting better about the rope being swung around him and over his body. We will keep you posted when he heads off to training and how that next chapter unfolds.