KPLU Public Radio: One Woman’s Drive to Save Neglected and Abused Horses

One Woman’s Drive To Save Neglected And Abused Horses
by Jennifer Wing
Broadcast on Oct 15, 2015 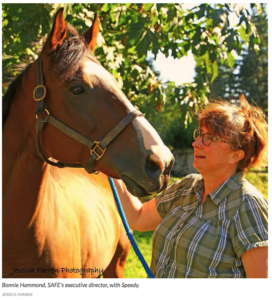 Anyone who is remotely interested in buying a horse should talk to Bonnie Hammond first. “Caring for horses is expensive,” says Hammond.

Hammond is the Executive Director of SAFE, otherwise known as Save A Forgotten Equine.

She says if you buy a horse be prepared to spend serious money on food. “The cost of hay has gone up obscenely,” she says.

Horse teeth need to be filed down. If not, they get jagged and cut the inside of the animal’s cheeks. Hoofs have to be trimmed. “Even without putting horse shoes on them it costs $40 dollars a trim,” notes Hammond.

“They have complicated digestive systems. There is a lot that can go wrong in there,” Hammond says with a tone conveying some unpleasant past experience in this area.

If you don’t have enough space for them at your place, you’ll have to pay rent for them to live somewhere else. In the Seattle area boarding rates go from $600 a month up to $1,200.

Many of the horses at SAFE are there because their former owner did not think these things through.

Hammond did not plan to be the person who takes in the starving, fearful creatures that are the result of people’s poor planning and mistakes.

In fact, Hammond didn’t have her first riding lesson until she was in her 30’s, when she had a job as a graphic designer.

She says she was a “horse-nutty girl” as a child. She read the entire black stallion series, and “all of the Marguerite Henry Misty of Chincoteague books. I read all those to tatters,” Hammond says.

By the time Hammond was 39 years old, she finally realized her childhood dream of learning how to ride and owning her own horse.

“Then my horse needed a friend and that’s the point when I stumbled upon efforts that people were making in this area to help horses headed to slaughter,” recalls Hammond, “And once I found that world everything really started to snowball.”