I spent some time with Lola this weekend. I’ve been concerned about her since she lost her friend & pasture mate, Jasmine, this week.

She was very quiet for a couple of days but Saturday I got out in the pasture with her and she was engaged and interested in just hanging out. She had been mostly standing under a tree but as I moved around the pasture she followed so I planted myself in a cool place and she happily grazed in the shade around me.

The pasture she was moved to on Wednesday is a large rich grass pasture in the front of the property but next to what was going to be Basil’s summer pasture. They were getting along through the fence so Ken decided to turn them out together & they seem to be enjoying each others company a great deal. They’re both two years old and at one point yesterday they were racing laps around the pasture (much to the dismay of Uncle Ken who likes to keep the pastures looking pretty) By late yesterday, Lola had asserted herself as Alpha Filly and was nipping Basil and moving him around in play.

They both look very happy & we’re keeping an eye on things but we’re hopeful that this will be a good pairing for both of them while Lola is still here.

As I left last night around 9pm, they were grazing together side by side. I think that’s a good sign.

Update:
Here’s some photos from a couple weeks ago of Lola on her new pasture that she now shares with Basil. They are so cute together. We often find them grazing side by side or laying next to each other in the sun. They also play “race horses” from time to time and chase each other around the pasture. They always put a smile on my face when I pull into the barn 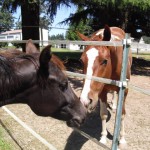 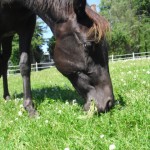 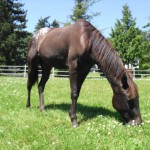 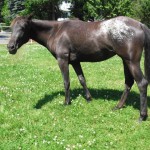 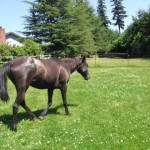