Lucky came to the SAFE Horse Show with Helga Roberts and the team from Dutch Mills Farm. Upon his arrival, he found the show environment to be somewhat electrifying, but after about an hour of handwalking to give him the opportunity to look at all the activity, he calmed down enough for Helga to ride him. He did two dressage tests — one in the Indoor arena in front of judge Paige Ruehl, the other in the outdoor court in front of judge Sonja Vracko. He scored 65% on his Intro C test — good enough for 3rd place — and a 61.667 on Training Level 1, which got him 4th place in the class. All in all it was a good outing for our Lucky.

At the show, Lucky was reunited with his former owners from Emerald Downs, Jan and Keith Swaggerty of SWAG Stables. The Swaggertys lost Bucky B Lucky to a claim, but played an instrumental part in helping Jet Parrett get him out of the auction where he landed and into the hands of SAFE. It was a touching reunion. The Swaggertys will be joining us in September when Emerald Downs debuts their feature video “Where Are They Now” about Bucky B Lucky, stay tuned for more information about that upcoming event.

Here are some photos from the show, taken by photographer Bobbie Climer: 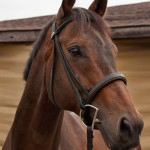 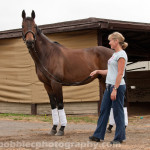 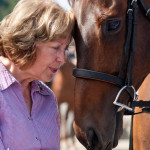 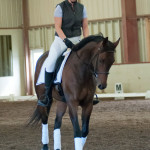 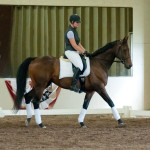 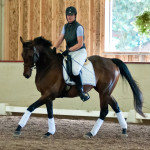 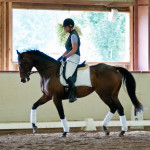