We also had one of our newer volunteers Victoria ride Lucky for the first time in a lesson.  Lucky however, was having a “Thoroughbred day” — his brain was simply not in the game today and he was fidgety, agitated, and unable to concentrate.  Lunging settled him temporarily, but he got worked up again when Victoria got on and most of the lesson was spent just trying to get him to relax and go forward.  She did a nice job with him and got some nice moments with him (see photos below), but he never really settled down.  Afterwards, we took his tack off and he rolled…and rolled…and rolled!  Then he ran around like a maniac and we couldn’t catch him for some time and by that time he was lathered with sweat.  Silly boy!  He certainly didn’t make the best impression on Victoria, who is one of his biggest fans and was so excited to ride him, but it was truly out of character for him and I am chalking it up to not having turnout outside of his paddock for a few days as well as being very itchy as he has started shedding and I think all he was thinking about was rolling most of the lesson.

Also Lucky-related, we will be hosting several public viewing parties for Lucky’s big TV event on Friday night!  We are hoping to host a few of them — one in Monroe, one in the Tacoma area, and possibly one in the Eastside area as well.  The idea is just to get some of our fans and supporters together to watch the show, have some snacks, listen to us talk briefly about SAFE and then hang out for a while after the show and socialize…what horse people love to do best!  Sounds like fun, doesn’t it? 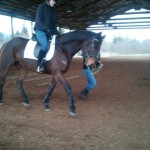 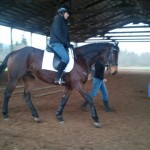 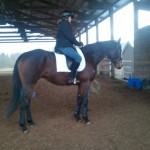