Had a visit today from one of Bucky B Lucky’s former part-owners. Tara confirmed that Lucky was always a barn sweetheart. She also brought two win pictures of Lucky that his future adopter will get to keep. Very cool, thank you Tara!

This might be a great time to share some pictures of Bucky B Lucky at Emerald Downs where he was a race horse. The first two pictures are from Opening Day 2009 and Lucky finished 2nd in his race that day. Interestingly, Jet and Bonnie from SAFE were at the track that night as guests of SWAG Stables and got to join Lucky’s owners in the paddock prior to his race. Little did we know at the time that this strapping bay racehorse would some day fall into the wrong hands, nearly go to slaughter, and end up as a SAFE horse!

The rest of the photos were taken the year before, and the winner of Lucky’s race that night was…Bucky B Lucky! 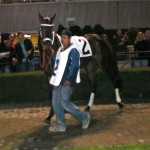 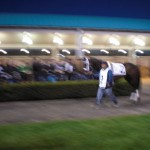 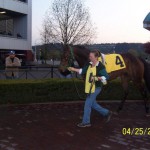 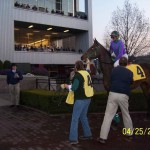 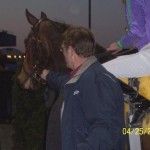 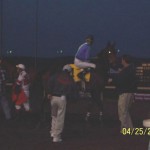 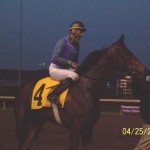