Mina and I have gotten to know each other well, and I think she’s pretty great. I think she truly does feel affection for “her” people. She has the softest, kindest eye of any horse I’ve ever met, and there’s a lot of soulfulness in her personality. But don’t let her borderline-sluggish demeanor fool you, there’s plenty of spunk in this mare 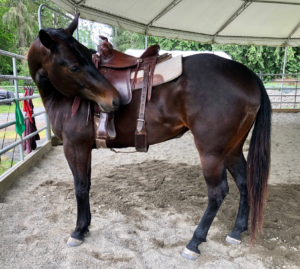 “What is this thing?”

I first started doing groundwork with her before our September 2018 Joel Conner clinic. After that, she went on maternity leave for several months. But after that nice vacation, she came back to work refreshed and happy. Mina took to the rope easily, and after a few sessions working with it around her belly and flank areas, she was like an old pro when it came to her first saddling. I seriously wondered if maybe she had worn a saddle before as I was putting it on her for the first time. She stood there like she knew exactly what I was doing and had been through it a thousand times. But once I moved her out, it was clear that this thing on her back was a new experience. When I asked her to move out, she walked off and then froze, and then there were a couple hops in there when we got to the trot. By the end of that first session, though, she was comfortable moving through all three gaits and seemed fairly content with the whole process. It was pretty uneventful. She often seems to have this look on her face that says, “Well, if that’s really what you want to do, I guess we’ll try it.”

I worked with her during one groundwork session of this most recent Joel Conner clinic. The Mina that I worked this time was a complete 180 from the Mina I worked in her first clinic. Before, my biggest challenge was getting her to move forward. This time, we focused on walking accurate circles (it’s harder than it sounds), and punctuality. I’ve noticed that she retains what she learns pretty well. But if you get lazy about something and stop giving her 100% of yourself, she takes advantage of that and gets lazy, too. She is proof of just how important consistency is with horses. Some of them will fill in for you if you’re not giving them 100% on any given day, but so far Mina is not proving to be one of those horses. Once she is not so green, I imagine that will probably change to an extent. I think she’s the type of horse that will always prefer to take the easy way out of things, but she does also try hard to learn what it is that’s being asked of her.

Mina has to recover from her umbilical hernia surgery before she gets started under saddle, so it will be a little while before we get to post that update. I am excited to see how she turns out as a riding horse. I think she’ll take a little work at first, but in the end she’ll be magnificent.