May Volunteers of the Month: Scott Bailey and André Cabrera 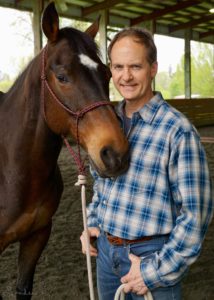 Scott Bailey can be in jeans saddling up his favorite horse Justin one day, and waltz into the Heart of the Horse auction looking dapper in a suit the next. Scott mainly works horses in the Horsemanship program now, but he started on a chore shift and has spent plenty of time cleaning stalls. In addition, he is always eager to pitch in and help when we need him, from running errands for the auction committee to shoveling snow. Since August of 2017, Scott has been wowing us with his commitment.

Our Operations Director, Terry Phelps eloquently sums up the many reasons we have chosen Scott Bailey as a May Volunteer of the Month:

“Scott’s commitment and passion for helping the SAFE horses in all aspects of their rehabilitation and training has been invaluable. He cares deeply about the horse’s wellbeing and finding clear ways to communicate with them. Scott has ended up working a few of our more troubled geldings and has done a remarkable job helping them become more gentle and prepared for adoption. Scott is always willing to lend a helping hand and on top of helping in our Horsemanship program, he often is found filling in on chores and facilities needs. I was very thankful for his help and height during the snow storm clean up, as he cleared snow, ice and debris from our roofs.”

Scott lives in Rainier Beach with his life partner, Stephanie Levine. Scott says he feels lucky that Stephanie not only supports his work with SAFE, but encourages it. Scott works in technology and loves the combination of skills he uses in his job. “My work is at the intersection of people and technology. I work with sales teams implementing best practices using systems and cloud software tools to improve sales processes. I’m delighted to be starting a brand-new role with Egencia, the corporate travel division of Expedia!”

Scott moved to Bellevue, WA from Washington DC when he was 13, and the move west led him to his first interactions with horses. “I think I was about 10 when I took my first riding lesson. A horse was all I ever wanted and asked for one constantly. When my parents moved to Bellevue, they bought an acre, built a house and barn and bought me a horse at 14. Our house bordered the trail system that led into Bridle Trails Park where I spent countless hours riding my Appaloosa-Arab. Being part Appaloosa, Washakie had been named after a great Nez Perce Indian chief. He was a wonderful horse for me, especially being in my backyard. He would whinny to me when I came home from school. He would kick his barn door madly on weekends when I was trying to sleep in and was upset that I hadn’t fed him yet. He loved to flip the light switch on and off that was installed to closely to his stall door and would get me in trouble for failing to turn out the lights when I came up to the house from the barn each evening. Sadly, I had to sell him when I went off to college at 18.”

As an adult, Scott was searching for a place where he could get involved with horses again and also give back. He was referred to SAFE by a good friend.  “I looked at a variety of options and places and SAFE looked like it would be a good fit for me.” Scott’s current SAFE buddy is Justin. “I have really connected with him and I feel he has connected with me. I really appreciate how much he tries. He is so smart and such a kind horse. I always feel such peace within myself after a training session with Justin.”

Scott is deeply touched by his work with SAFE.  “I always feel as if I get back more than I give. I love the community that has been built and continues to be nurtured at SAFE. I so admire the many strong, passionate and loving women at SAFE. There are so many amazing role models for young women to follow and learn from at SAFE. As a father of two awesome daughters, I am always looking for great women that my daughters can learn from and be mentored by. SAFE is full of these women and I love that!! I don’t feel deserving of volunteer of the month but I am appreciative of the recognition. I want to thank Terry, Jolene, and Joel for all they have taught me about horsemanship. I have learned so much and will remain eternally grateful. The more I learn, the more I feel I must give back to SAFE and our herd. Personally, I think these amazing horses are helping me more than I am helping them.” 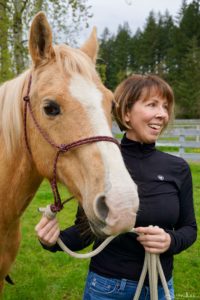 Attention to detail, follow through, reliability, clear communication; all attributes of a rock-star volunteer, and André Cabrera has them in spades. André has been with SAFE since January of 2018. She has spent time on a chore shift and as a shift lead, as well as well as being a super help of at the 2018 horse show. André’s schedule is such that she is now most available to do night check, and she truly excels at this task. Night check is all about details and making sure everything is off, away, locked up, closed, safe, quiet, and that the horses are all looking good. André keeps the horses safe and the farm on track with her work on night check.

Born and raised in St. Louis, Missouri, André is a hometown girl and a die-hard Cardinals fan and lover of the Clydesdales. She currently lives in Redmond Ridge with her other half, Jorge, but is moving to Woodinville soon. Outside of baseball, André spends lots of time with her two Bernese Mountain Dogs, Pippa and Truman. She’s been doing agility with both of them just for fun for about 5 years, and they all love it.

André also loves to travel, ski, garden, workout and read, but much of the time spent on these things has taken a back seat to Jimi Hendrix, her special horse. Here she tells the story of Jimi. “I spend a big chunk of my time with him. I go to the barn every day without fail because that is the commitment that I made to Jimi when I adopted him. Jimi Hendrix came into my life about 3 ½ years ago. I met him at a retired racehorse rescue where I was volunteering, and we were instantly drawn to each other. He’d had a successful two-year racing career (just to be clear, I am absolutely not a fan of the track) at Emerald Downs and Golden Gate Fields until the tragic accident that left him with a fractured knee. That was the end of his racing career.

“As with many track horses, Jimi has a vice, and his just happens to be cribbing. Sadly, the man who owned the farm where the rescue ran its operation blamed Jimi for ruining his fence line and he actually threatened to take a gun to Jimi’s head. He was only 5 years old at the time and there was no way that I was going to let that happen. I had no plans of getting another horse, but fate took the reins and before you know it, I adopted Jimi and we’ve been together for almost 3 years now.

“After giving Jimi time to let down from the track and heal his wounded knee, I was able to turn Jimi out with a gelding herd, which has had an amazing impact on his demeanor. I’ve been working with my trainer on in-hand dressage work and occasionally liberty. We are preparing Jimi so that I may start riding him this summer.

“About 7 months ago I started working on Saturdays at Topline Equestrian Centre, where I board Jimi. Over the course of time, I have had many philosophical discussions with the owner of Topline, and we realized that we have a mutual interest in sustaining the sanctuary for horses and people that Topline has become over the past couple of decades. Recently she decided she was ready to retire and sell Topline, and I found my new career path as the owner and manager of Topline (effective May 1st). If I hadn’t adopted Jimi, this career-changing, life-altering opportunity never would have come about. I’m a great believer that everything happens for a reason.”

According to André, her passion for horses goes back to her very early childhood when she first learned to ride on her aunt and uncle’s farm. She took Hunter / Jumper lessons, eventually earned a spot on the Murray State University Equestrian Team, and acquired her first off-the-track Thoroughbred, Silent Partner. She says they had a magical partnership and accomplished great things in the Hunter / Jumper ring during their 5 years together before his premature and unexpected passing.

André feels that for the neglected and abused horses that are lucky enough to wind up at SAFE, she loves being a part of giving each and every one of them a new chance at a better life than the one they left behind. And, for the horses that were relinquished to SAFE due to financial or health circumstances, she just wants to contribute to helping them transition to their new surroundings and help give them a sense of security and caring in their environment. She loves all of the SAFE horses, but has a soft spot for baby Rae.

For André, Night Check is the best shift, she says, “it’s really my favorite shift and I feel fortunate to be one of just a handful that gets to experience this shift. It’s such a treat because I get to interact with every single one of the horses and learn their individual personalities.” Her husband, Jorge, comes with her to the barn in the evenings and she says they make a great team and enjoy tucking the horses in for the night.

Thank you Scott and André, for all you do to support SAFE! Congratulations on being named May Volunteers of the Month, and good luck on your new career adventures.